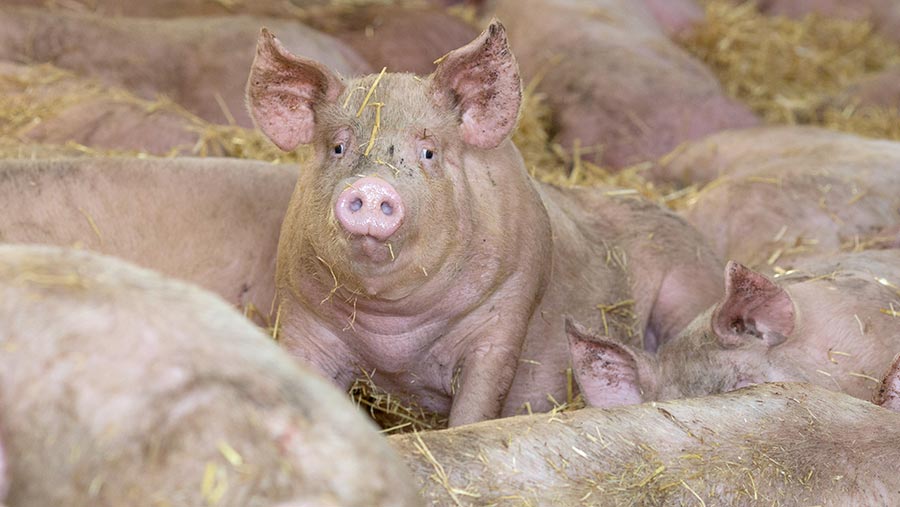 The pigs run alongside a haulage business as well as a mixed farm consisting of 200 Texel-cross ewes, 25 pedigree Longhorn cattle and 40-50 calves that are taken through to fattening across 36ha.

While the Saxbys’ other enterprises were performing well, the couple admits batch selling animals once or twice a year put pressure on cashflow. 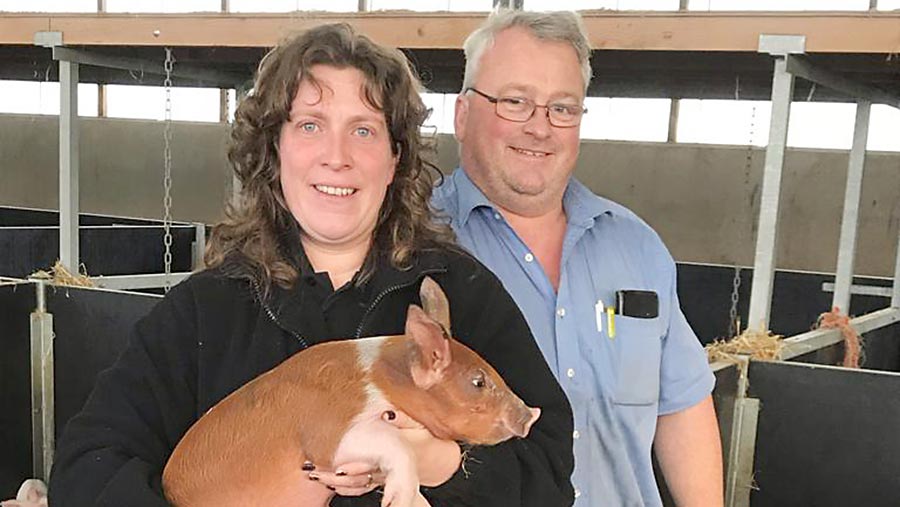 They had not previously looked at pigs as the slat-based system wasn’t the route they wished to go down and they wanted something more valuable than slurry to spread on the land.

But when BQP, who set arrange pig breeding and growing contracts with farms, moved to straw-based systems, the Saxbys decided to give it a go.

The pig shed cost between £95,000 and £100,000, which included automatic curtains, panels, gates, a central feed passage and offset walkway so pigs can be viewed easily.

BQP provided the Saxbys with a contract initially for five years and also gave a forecast on what the earning potential was from the shed.

This made it easier for the couple to secure a loan on the build with an estimated payback of between six and eight years.

Now five years in, Mrs Saxby says: “We are not too far off paying off the loan now, and if we ever wanted to leave pigs, we still own the shed structure, which could be used for other livestock housing or storage.”

The contract was initially for five years and included a two-batch notice period for both parties.

Now this has finished, they are on a three-batch notice policy. It is expected that each contract finisher can finish 2.2 batches a year. The Saxbys have managed to clear 12 batches in five years.

The contract with BQP means the Saxbys provide their time, straw, water, and the building, and BQP provides all the feed and vet and medicine costs.

They have 500 pig places with pigs arriving in one batch at four weeks old at an average weight of 7kgs and leave between 18 and 20 weeks on the farm at a target 110kg liveweight. All the pigs in a batch arrive from the same unit.

Because the Saxbys built a new shed to BQP specifications, they receive a premium of £1,500 per batch (£3 per pig place) for the first 11 batches of pigs.

This is on top of their weekly payment of 66p a pig a week, which is paid as soon as the pigs arrive and until the last pig leaves the farm. Any pig losses are then deducted at the end.

All BQP contract finishers receive a “self-select” bonus of £2 a pig for every pig selected in the right weight category. So, if 300 pigs are finished at the right weight that’s an extra £600.

There is also a bonus for feed conversion efficiency, with a number of categories for this.

In a 12-month period, the Saxbys have a rough earning potential in excess of £15,000, with bonuses on top.

Mr Saxby says: “Once you are up and going it takes about 1.5 hours a day to manage.

“It is a good source of regular income, it fits around our other businesses and we are able to improve the land by providing cheap fertiliser.”

Achieving top performance is essential to maximising profits from the unit. Mrs Saxby says it all comes down to attention to detail.

The Saxbys are averaging a daily liveweight gain in excess of 800g a pig a day and mortality has been as low as 0.8% in a batch (see “Performance figures”).

Mrs Saxby says attention in the first few weeks after they arrive is critical to get the pigs growing.

When pigs arrive, they are split into same-sex groups into 10 pens, with the 11th pen left empty.

After five weeks, the smallest pigs from each pen are then grouped into the spare pen.

Mr and Mrs Saxby then make sure they enter each pen between three and six times a day for the first couple of weeks to get them up and eating.

Water is manually released from the nipple drinkers into the water trough and an electrolyte added to the water.

“The pigs go mad for it,” says Mrs Saxby. “This really helps get them going and encourages eating and drinking.

“Within a day or so, the pigs will knock you over to get to the water trough. Milk powder is also manually sprinkled on to the feed for the first couple of weeks to encourage feeding.” 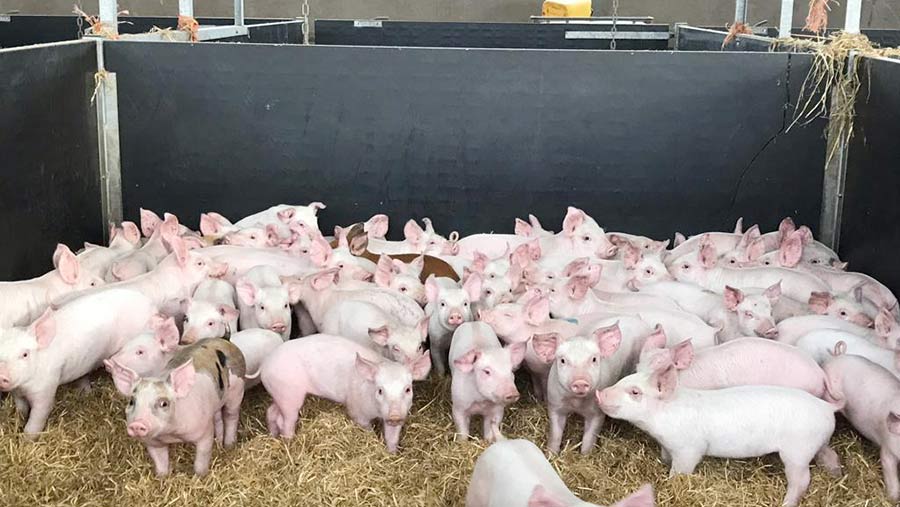 The next secret to their success is drawing the first batch of animals. The Saxbys argue that making the first draw at the right time is probably the most important aspect when finishing pigs.

Mr Saxby says: “We draw pigs in three batches from week 15. The first batch usually consists of about 120 pigs, which helps relieve the pressure in each pen. T

“he smaller pigs then tend to step up as there is less competition.

“You don’t realise how much pressure a shed is under when pigs get bigger. As soon as you pull pigs out the ones remaining are like goldfish and they grow to the size of the pen available.

“If you hold on to pigs for too long you only end up spoiling them.”

The last secret to their success is being vigilant. Mr Saxby adds: “You have to be consistent with the pigs, and if you pick up things early, the pigs tend to respond better. The more you put in, the more you get out.”

As an aside to the pigs, the bedding muck, which is spread and then broken up with a chain harrow, has helped improve the grass.

They say the grass is greener and restores faster, which is helping extend the grazing time for cattle outside. They have also reduced the amount of bought-in fertiliser.