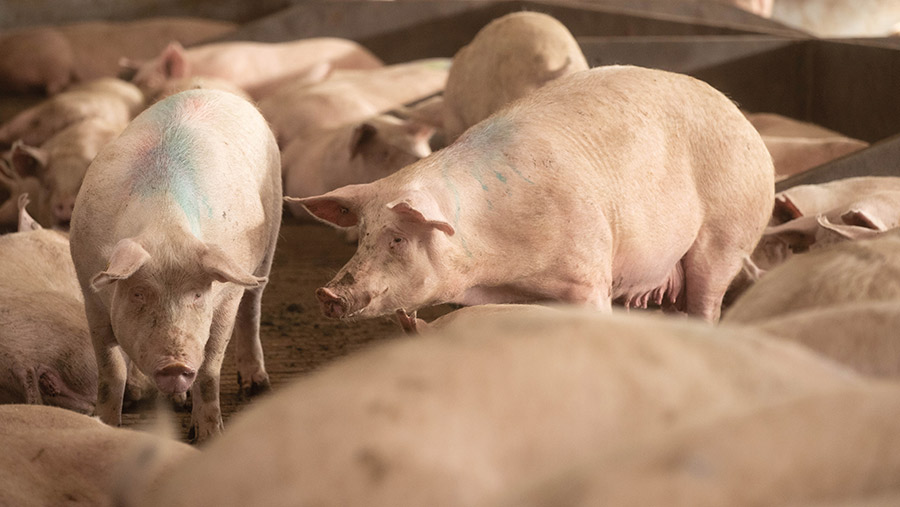 Reducing the use of antimicrobials is a goal for pig producers globally. Improved gut health is rarely linked to this goal, but it is potentially a significant part of the strategy.

This is the view of Heidi Hall, Nuffield scholar and global technical services manager for feed additive company Anpario. She believes that harnessing the power of the microbiome – a population of bacteria within the gut – is essential (see What is the microbiome?, below).

The topic was the focus of her Nuffield project, which was sparked by the announcement at the time of an imminent UK ban on therapeutic levels of zinc.

Ms Hall visited the US, China, South Korea, Denmark, the Netherlands, Portugal and Canada to discuss the macro factors which affect gut health and how they could be leveraged to support better pig production.

The factors she considered were nutrition, veterinary interaction, genetics and husbandry/management.

She concluded that minimising stress via each of these factors is key to reducing gut inflammation and unnecessary medicine use. Ultimately, this could reduce antimicrobial resistance.

Underpinning and connecting these four factors is maternal health. The focus for any kind of intervention/management should be on the sow as she directly and indirectly affects litter health and lifetime performance, says Ms Hall.

Her research also showed that pigs produced without antibiotics are, in general, managed more holistically, with a greater focus on health. However, opinions varied widely and in some cases a link between antimicrobial resistance and antimicrobial use was denied.

Below, Ms Hall shares her insights gathered from the systems she explored.

Fibre is the most significant component when thinking about gut health. Its importance was seen particularly in the Netherlands, Canada and the UK. In contrast, it was not an overly important feature in US diets.

In the Netherlands, where zinc has been removed from weaner diets, producers talked about the requirement to balance protein and fibre sources in the diet. They also stressed the need to ensure this fibre is properly optimised.

Diets featuring restricted levels of crude protein post-weaning (less than 17%, compared with the traditional 20%-plus) have also been found to have a positive effect on gut health. Feeding a lower level of crude protein helps reduce the likelihood of undigested protein entering the lower gut.

The role and function of vets in the countries Ms Hall visited varies greatly.

For example, in some countries, vets provide consultations and nutrition advice, while others provide a more traditional medical service.

There was a divergence in professional opinion as to whether it was possible to feed for health or not. In some cases, vets were giving advice which stated producers could not provide a health benefit via nutrition.

This was seen mainly in the US and there was subsequent evidence here of some producers feeding really poor functional fibre sources such as soya hulls. This obviously has a knock-on effect on gut health, says Ms Hall.

Vets doing a variety of roles is not necessarily a bad thing, and could actually be very beneficial. But what may be being forgotten is the value of different backgrounds and voices.

She found the producers that seemed to be making most progress in achieving low antimicrobial usage and maintaining healthy pigs were those who involved multiple people in decision-making.

At the moment, body condition and feed efficiency are available selected traits. Some producers and researchers believe these traits can lead to differences in feeding behaviour – meaning they could be grouped as “meal eaters” or “snackers”. They argue this could subsequently affect gut health.

There was on-going discussion in the UK and the US on the genetic traits for health. Some companies are now testing for resilience and potential resistance against important diseases including porcine reproductive and respiratory syndrome and porcine epidemic diarrhoea.

Many researchers across the globe are also prioritising the health and genetics of the sow. Maternal transfer has been found to be an important factor in piglet health. This means producers buying in piglets may be more likely to struggle to manage pig health post-weaning without using therapeutic zinc because they do not have an influence over the breeding herd.

Again, animal husbandry and management varied greatly across the countries visited. For example, sow crates are still used in the US, China and South Korea, but have been banned or are being phased out in the others.

Where sow crates are used, they are predominately for short windows to lower the risk of stress between service and pregnancy confirmation.

While it is not possible to directly link sow crates and gut health, the stress levels and subsequent feed intake do have an effect, says Ms Hall.

Of all the farms and units she visited, the best were those which had more focused protocols on animal husbandry and were regularly talking about how pigs could be better managed to reduce stress and optimise gut health. This conclusion is similar to the one reached about the value of involving many voices in decision-making around overall pig health.

Further trials are needed to understand just how great the influence on gut health can be, says Ms Hall. This will help to guide further decisions on manipulating production in favour of a healthier microbiome.

What is the microbiome?

The microbiome is a population of bacteria, fungi and viruses which reside in the gut and can aid the digestion of food.

Gut health is often the term used to describe this and ‘good’ gut health encompasses a diverse, well-balanced microbiome.

A diverse microbiome is also known as a state of eubiosis. The opposite of this is dysbiosis – a disrupted gut. This may lead to pathogen challenges within the animal.