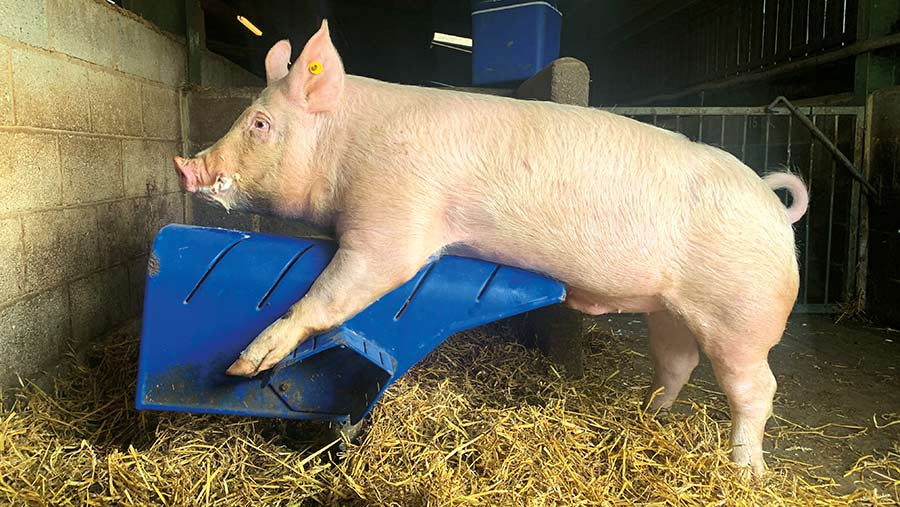 A piece of breeding kit hailed by a pig farmer as “the best bit of tech to come into pigs since ultrasound scanning” is having a positive effect on pig fertility, and saving time.

He uses semen collected from home-bred boars to artificially inseminate (AI) his sows, so knowing the semen is of top quality is essential.

Before investing in the new technology, Mr Thompson and his team would assess sperm motility and quality in each sample using a microscope and a colorimeter – something he admits was time-consuming and subjective.

Based on the total sperm count in that sample, a formula would be used to calculate the required amount of diluent to add to the semen sample.

Mr Thompson explains: “Boar semen is highly concentrated and each collection can provide enough for 40-plus services. We aim to get 3bn sperm in each dose.

“Previously we used a colorimeter to measure overall concentration, including dead or non-progressive sperm.

“This would be combined with an assessment of motility on a microscope to analyse how many sperm were alive.”

This method requires skill and experience, and a degree of subjectivity can cause variation between operators, he adds.

Since investing in a mini/mobile computer-assisted sperm analyser, that subjectivity has been removed.

The iSperm reads the level of sperm concentration, total motility, progressive motility and sperm kinetics in less than 30 seconds.

The pen-side technology essentially turns an iPad into a powerful microscope: 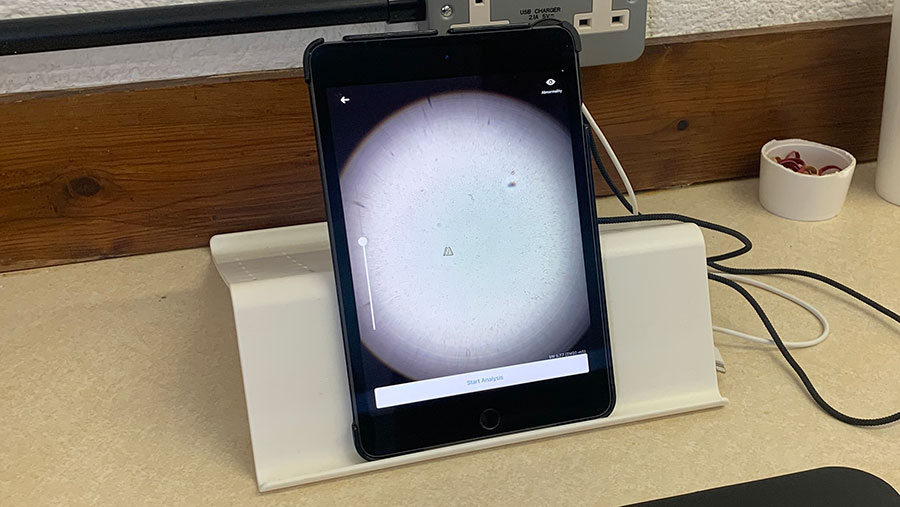 1. An optical lens is attached to the front of the iPad’s camera 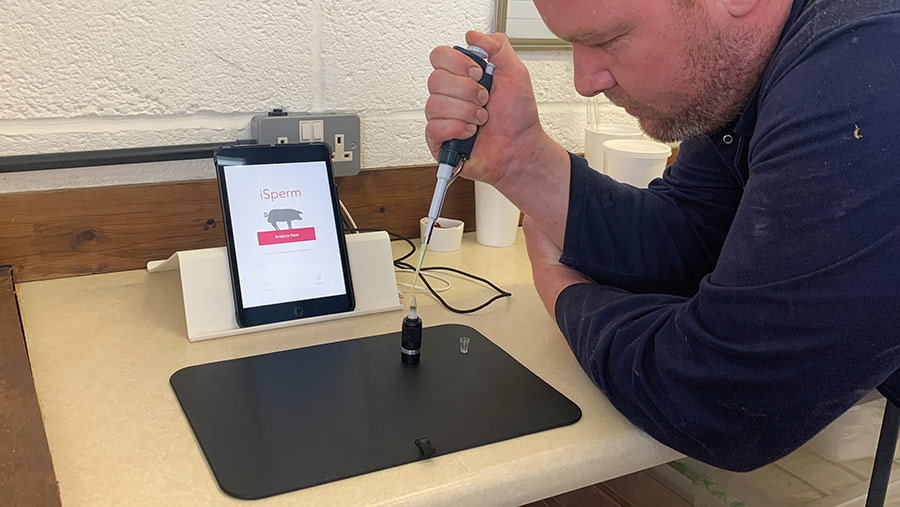 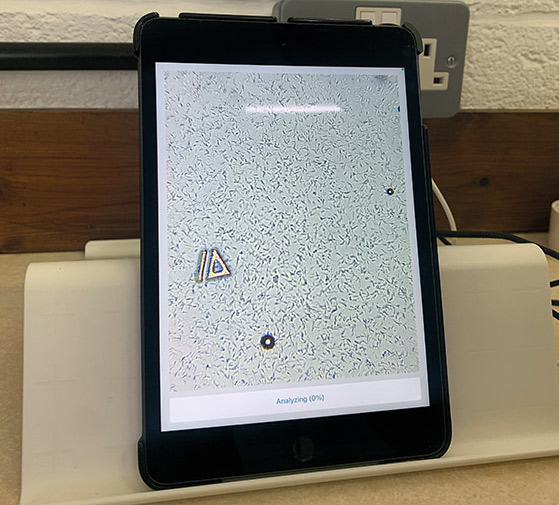 3. The iSperm app takes four videos of the sperm to look at various quality factors, including concentration of sperm, rate of motility, and progressive motility (whether the sperm swim in a straight line).

The greater the motility, the stronger the sperm and the more likely it will inseminate an egg. All of the images can be viewed live on the iPad. 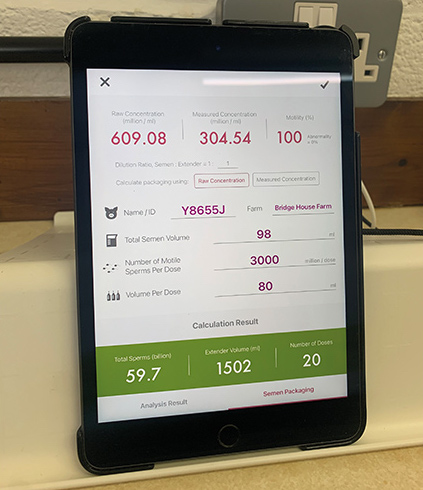 4. Data from each sample is uploaded to the cloud.

Because the data for each sample is uploaded to the cloud, Mr Thompson can see how each boar fares over time. The data can also be shared with his geneticist at Genesus.

Mr Thompson inputs further data such as the amount of semen delivered from the boar on a given day.

The app tells him how many sperm are in that sample and how much diluent is needed, based on the concentration and number of motile sperm.

This is essential to ensure there are enough viable sperm in each dose and that the correct amount of diluent is available to ensure semen longevity.

Previously, complicated maths was required to ensure this was done correctly.

The technology has also allowed Mr Thompson to consider using boars that he would previously have discounted.

“If a boar had lower sperm motility, we perhaps wouldn’t have used him,” he says.

“But because iSperm automatically determines the amount of diluent needed, based on the concentration and sperm motility, we can still use him.

“Essentially, this means that each semen packet [pig equivalent of a semen straw] used for AI will always have the correct amount of motile sperm [ignoring any dead or non-motile ones].

“Some samples that we would have rejected altogether previously have tested extremely well and delivered 95%-plus farrowing rates.”

He collects semen from about 10 to 12 boars a week. As well as assessing their samples on the day, he monitors them throughout the week to see how they perform.

“We are using a 10-day extender diluent, which means the samples should be good for 10 days. However, by monitoring, even after four to five days, some samples are reducing in quality.

“We can do this thanks to the technology making it so easy.”

Since investing in the iSperm in November, Mr Thompson has already seen positive results. The farrowing rate is now running at more than 90%, compared with 85% before using the kit.

The number of pigs born alive has also lifted by one across the three breeds on farm.

Although many factors can affect fertility, he puts the improvements down largely to the iSperm.

This is because it is helping improve the semen collection process, and the concentration and quality of semen inseminated is better because the data is more accurate.

He adds: “Pig farming is in a complete state at the moment, making it even more important to be efficient and to make the most out of everything you have got on the farm.

Not only that, [the technology] is making life easier for our staff and is also engaging them, as it’s so easy and visual.

“This is important when we are in an industry that finds it hard to recruit and retain new staff members.”

Although collecting semen from boars has fallen out of favour, with many producers choosing to buy in pig semen, Mr Thompson believes this piece of kit could help both pig farmers and other livestock producers.

“Using your own boars can be better value for money. This type of technology makes the job far easier and more accessible, as it removes any subjectivity, monitors performance and is very simple to use.

“It could also make bull or ram fertility testing easier, quicker and more accurate. It’s something farmers and vets could use before breeding seasons or selling breeding stock to demonstrate their bull/ram is fertile.”

iSperm can be used for all livestock species as well as for horses and dogs.