A ban on using farrowing crates on UK pig farms has been called for by a number of non-government organisations in recent years.

Although there are no imminent plans to change leglislation, the government has stated its aim “for farrowing crates to no longer be necessary” in Defra’s pig welfare code, which provides practical guidance on interpreting the law.

MPs debated the caging of farm animals, including dairy cattle, poultry and pigs, in March this year following an “end the cage age” petition, which received more than 10,000 signatures.

Farming minister Victoria Prentis explained commercial development of free-farrowing systems is not advanced enough to recommend compulsory replacement of all farrowing crates, and she does not want to outsource animal welfare issues to other countries.

She said the government is actively exploring options and will work with the pig industry to develop a system that works commercially and protects the welfare of both sows and piglets.

So how can the UK pig industry find a realistic route towards free-farrowing? Farmers Weekly takes a look at the challenges and catches up with one farmer who has installed 72 free-farrowing pens.

Legislation currently allows sows to be kept in a farrowing crate from a week before farrowing through to weaning, usually up to a total of five weeks.

Crates help prevent sows from crushing their piglets, with sows able to stand up, sit and lie down, but not turn around. They also help stock persons to work safely.

Around 40% of sows in the UK are kept outdoors and already farrow freely in farrowing arcs. For indoor systems, there are three main alternatives to the conventional farrowing crate:

Many free-farrowing systems are being developed throughout Europe, but few are in commercial production as there are a number of challenges.

The industry is committed to developing new systems, but the higher capital cost and the ongoing costs of production present hurdles. It’s about £3,000 for a conventional crate, and £5,000 for a temporary crate. Free-farrowing more than doubles the cost at £7,000.

On outdoor units, the higher cost of production is partly offset by premium prices received and lower infrastructure costs.

Because there is no guarantee of a future market for pork from indoor, freedom-farrowing systems, or that producers will be paid more, most don’t have the confidence to try free-farrowing pens.

A National Pig Association poll has shown 43% of indoor producers would exit the industry if farrowing crates were banned.

Small trials of a limited number of pens are not ideal as sows prefer consistency. Research institutions and producers continue to work on improving designs, but there hasn’t been any UK government funding for development of free-farrowing systems since the three-year Piglet and Sow Alternative Farrowing Environment (Pig Safe) project began in 2008.

Rather than banning crates, the industry would like to see support for producers who choose to switch voluntarily to an alternative farrowing system, whether that be government funding for trials or price premiums passed through the supply chain.

Temporary crating could be a more feasible option as it is currently easier to balance the welfare of sows, piglets and staff. There is data from Danish farms showing mortality in temporary crating is similar to conventional crates. 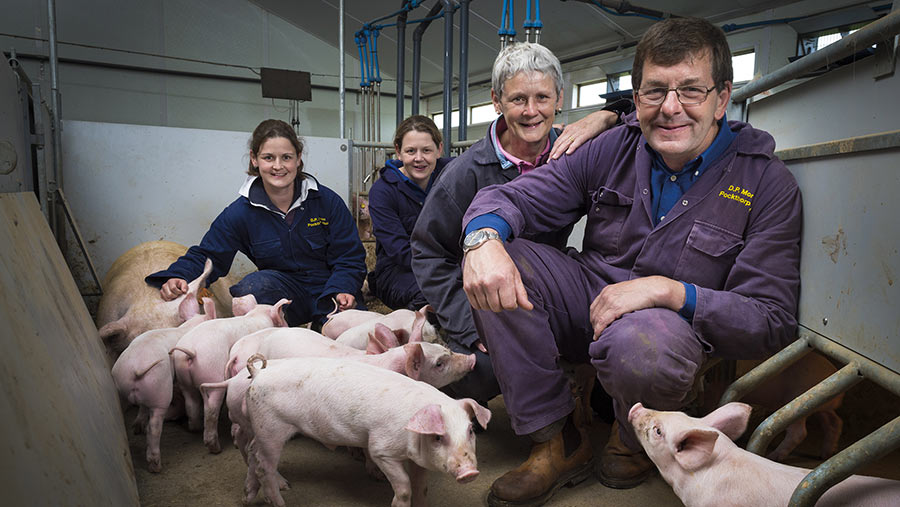 Yorkshire farmer Vicky Scott is one of the first UK pig producers to pioneer free-farrowing pens.

Eight years ago, she installed 72 free-farrowing pens on the 1,700 indoor sow system she runs with her parents, David and Sue Morgan, and sister Kate.

These accommodate a week’s worth of sows. 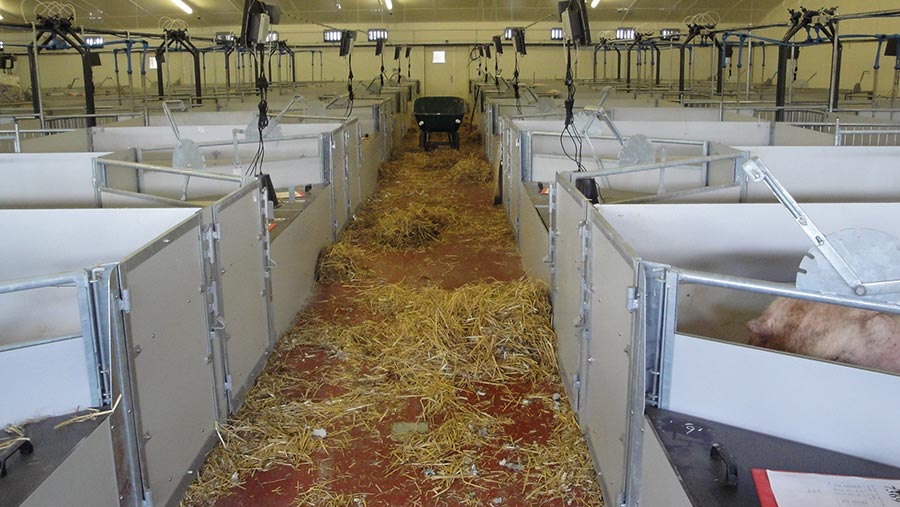 The sows’ natural nesting behaviour in the free-farrowing pens has led to quicker farrowing and more colostrum. The environment is wonderfully calm with audibly contented sows, particularly just after farrowing.

However, these initial benefits haven’t yet translated to the higher average weaning weights they expected, as it’s difficult to keep the pens clean.

Two-thirds of the floor is solid and a third slatted, but not all pigs differentiate between the two, and pens need mucking out each day. 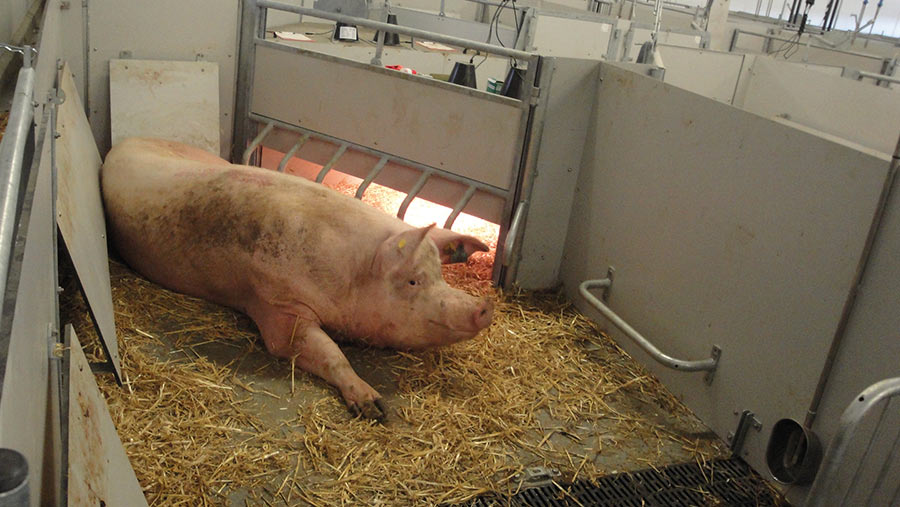 During farrowing, Mrs Scott provides plenty of sawdust, plus straw on top, to keep piglets dry. She plans to put in drainage holes in the solid area to improve hygiene, and increase ventilation to better match the size of the shed.

Piglet mortality rate varies between 14% and 20% or more in the free-farrowing pens, compared to an average 12% in the conventional crates.

The variation in mortality depends on the proportion of older to younger sows in each batch, and high numbers born alive add to the challenge.

If all farrowing accommodation was the same type, there would be more opportunity for learned behaviour, and Mrs Scott hopes to try this by creating a “herd within the herd” which only farrows freely.

Future
Following numerous public events hosted by the family, visitors say they prefer seeing the sow unconfined, even when the pen isn’t as clean and they know piglet losses are higher.

Mrs Scott believes the customer’s view is hugely important. Her ultimate goal is to install more free-farrowing pens and she is confident they can build an improved system, on a slightly smaller footprint.

But she doesn’t feel they can make that investment without long-term backing from a retail customer and a guarantee of a higher price to cover the costs.

They have two weeks’ worth of old farrowing accommodation that needs replacing, and they are planning to put in some opening crates as a compromise. Sows will be confined for up to three days around farrowing to help reduce piglet losses.