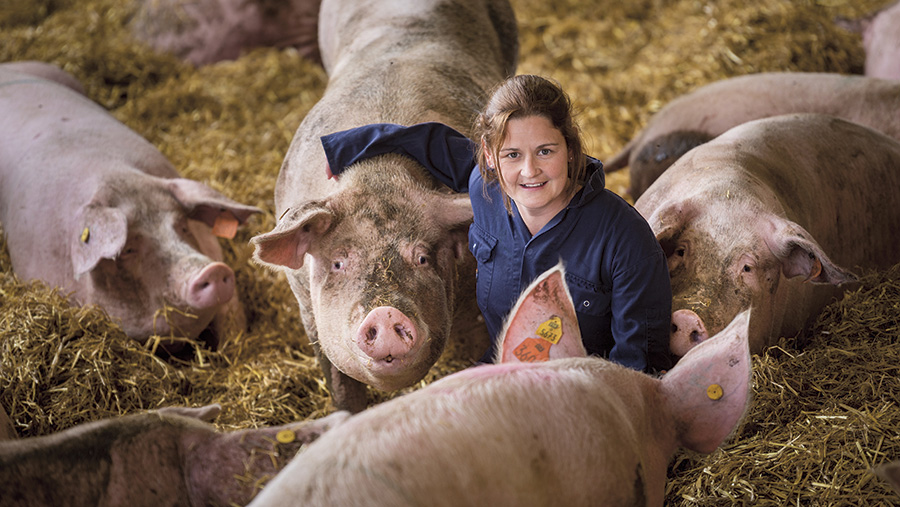 A family of Yorkshire pig farmers has gained access to a niche US pork market and added 10% to the price of their product by ending antibiotics use and removing fish meal from the diet of animals in their outdoor unit.

The Morgans, who farm sows indoors in East Yorkshire and outdoors in North Yorkshire, were approached by pork processor Karro in January 2015 about a new contract to supply antibiotic-free pigs fed a vegetarian diet to the US.

The next day, they called time on antibiotics use – in feed and via injection – in their outdoor unit in North Yorkshire. Five months later (in June 2015), their first batch of antibiotics-free, vegetarian-diet pigs went to slaughter, and the Morgans are now delivering a batch of about 500 a week.

For their efforts, the Morgans earn 8-10% more a pig when compared to those from their conventional, indoor unit.

With pig prices in the UK hovering at an eight-year low – thanks in part to the Russian embargo – Kate Morgan, who farms with her father, mother and sister, considers the arrangement with Karro an opportunity to “differentiate” their product.

“There’s a premium, niche market out there,” she says. “Why shouldn’t we fill it?

“Anything you can do to get into a premium market like this one is good. It’s tough at the moment, so if you can differentiate your product that can only be a good thing.”

From birth, pigs in the Morgans’ US-destined outdoor unit are not given antibiotics in either feed or via injection.

They are vaccinated at weaning, before being weaned off sows, which are allowed antibiotics, at 28 days and sent to third-party accommodation.

However, if antibiotics are required the piglets “get it straight away,” says Miss Morgan.

“If any animal needs medication for whatever reason, it is treated. Nothing is left to suffer.

“It may be one pig, in which case we tag that pig. It may be the whole batch via in-water medication.”

And because Karro also takes delivery of pigs treated with antibiotics for other customers, there is never a question of whether to treat or not. “The welfare of the animals is our number one concern,” Miss Morgan says.

Just three batches – of about 900, 700 and 500 head – have been removed from the antibiotics-free pig delivery to Karro to date. In other batches, less than 5% are typically tagged to indicate antibiotics treatment, she says.

“It sounds like a joke,” says Miss Morgan, “but there is a market for them in the US.”

Their indoor Large White Landrace unit in East Yorkshire is fed the same diet with the addition of 25kg of fish meal for every tonne of feed.

With their outdoor unit, soy protein concentrate and monocalcium phosphate are added to the vegetarian diet to fill the void left by fish meal.

“The vegetarian diet is a little more expensive,” says Miss Morgan, “but we don’t have to pay for antibiotics.

“So on the whole, if you take into consideration growth rates as well, it works out about the same.”

She says, however, the farm is not quite ready to take the antibiotics-free system indoors.

“Currently, we put antibiotics in their feed because we have had problems with meningitis,” she says.

“I would be wary about stopping because of the meningitis issue, but I’d like to think there will be an opportunity one day. It would lower our drug bill, and ultimately it is good for the pigs. There are no negatives, really.”

According to the US National Pork Board, the US is self-sufficient in pork and imports little from the EU, with Danish pork ribs and artisanal meats, such as prosciutto and pancetta, accounting for the bulk.

US demand for antibiotics-free, vegetarian-diet pork – often marketed in the country as natural pork – is significant. But with antibiotics commonly used by US pig farmers to promote growth, supply is limited.

“When I did my Nuffield scholarship in 2012, producing antibiotics-free pigs was quite big in the US,” says Miss Morgan. “But they just couldn’t do it because their biosecurity wasn’t high enough – whereas ours is – our pigs are healthy.”

Karro, which has farms in Brydock, Scotland, confirmed it is also producing its own antibiotics-free, vegetarian-diet pigs.

Farmers Weekly understands Karro has a market established for the product in the US, but is yet to attain all necessary paperwork to begin shipping.

Last year, the processor secured a deal to supply pork to US fast food chain Chipotle, which said it was forced to look abroad as 95% of American pork production failed to meet its welfare standards, which include a ban on pork produced using antibiotics or fed animal by-products.

Stephen Howarth, market specialist manager at AHDB Pork, says he is aware of “one or two” restaurant chains in the US that “are looking here” for antibiotics-free pork.

“Growth promotion use of antibiotics is illegal in the EU,” she says, “so we are a step ahead of the US in terms of what we use antibiotics for.”

Given increasing concern over antibiotics resistance in both animals and humans, Mr Howarth says interest could spread.

“There is certainly increased interested in this sort of production, and we are likely to see more of it in future in the UK and Europe.

“To some extent the organic market is part way there with antibiotics use limited. It’s only a small market, but as concerns about antibiotics resistance increase, it is a market that may emerge,” says Mr Howarth.

Miss Morgan says she can’t understand why there is no market in the UK for antibiotics-free pork. “You would think, especially with antibiotics resistance being a big issue at the moment, there would be a market here as well.”

She adds that given existing high welfare standards in British pig production, the transition to antibiotics-free on outdoor units should be relatively easy for farmers.

“As long as they have good biosecurity and a healthy herd initially, I don’t see why there would be a problem them doing it,” she says. “It wasn’t hard for us.”

And now is the time to do it, says Mr Howarth – while US demand for the product exceeds supply.

“What you tend to find is that the early adopters get a decent premium as there is demand, but not as much in terms of supply,” he says. “Early adopters will be getting a price that more than covers any extra cost.”