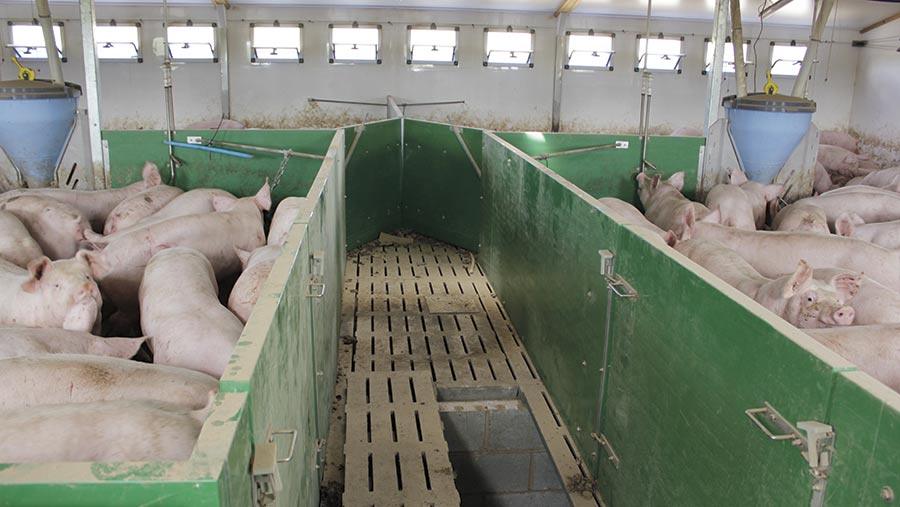 Mr Goodier, from Greenhalgh, Preston, became AHDB Pork’s pilot Strategic Farm host in 2016 and, since then, he is seeing continued improvements in performance on his 230-sow indoor unit.

This is down to a combination of changes, following four open meetings in which producers and the allied industry have joined Mr Goodier to discuss pig management and performance results.

Below, we outline six key steps the team has taken to help realise these performance improvements.

2.1p/kg Cost of production reduction as a result of improved pre-weaning mortality

0.7p/kg Cost of production reduction as a result of increased litters

Based on 2015 costings and calculated by AHDB Pork

1. Gilt nutrition is an area that has been pinpointed for review. The team is working on adjusting gilts’ diets, having had a good look at the current feed curve and gilt condition at different stages of the production cycle.

For example, they have found gilts’ condition score has tended to be too high at farrowing and too low at weaning.

2. Measuring out the daily feed allowance more accurately to ensure the quantities are consistently right and regularly calibrating the feeding bucket are two further practical changes.

3. To help monitor condition, the team has started weighing gilts going into the farrowing house and again after weaning. They will also measure back fat.

4. When it comes to serving sows, timing of insemination is very important and, having mapped the timing of oestrus with the help of AHDB Pork knowledge exchange manager Angela Cliff, it was decided to serve each sow just twice instead of three times.

5. They are also leaving a longer time from detection to first AI, so that both inseminations are contributing to optimum cover, close to the time of ovulation. The key has been learning not to rush.

They are now waiting until Monday afternoon to serve and it is making a difference compared with doing it in the morning as they had done before. They just needed the confidence to wait until they saw a proper heat.

6. An Opticare supplementary milk feeding system for piglets was installed in some of the farrowing pens in the autumn. Initial results seem to show improved creep intake and an increase in total litter weight and individual piglet weight. This will be measured in more detail in the coming months. 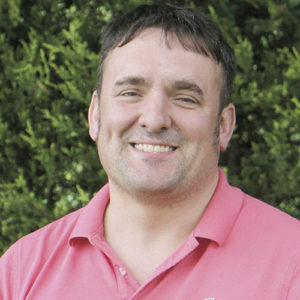 In the finisher herd, Mr Goodier has made major investment in a new finisher building to help cater for increased pig numbers being produced by the breeding herd and to enable them to take pigs to higher finished weights; the first pigs went into the building in May 2017.

Pigs are now going to be individually tagged and then weighed at birth, weaning and a week before slaughter, which will provide really detailed information on how individual pigs perform in the new accommodation and help ensure the business makes the most of the investment.

Weighing litters individually at weaning will be key to understanding patterns of variation in the finisher herd, so that variation can start to be reduced throughout the rearing and finishing periods.

Mr Goodier explains: “A key feature of the new building is that the vents are only on one side due to consistent strong winds coming from the west coast towards the building’s opposite side, and there was a lot of good discussion at the open meetings about if and how this would work.

“To help avoid any potential issues with air circulation, the dividing walls in the slurry pit have been built parallel to the long walls of the building, so they act as baffles and redirect the air flow.

“If you want to be the best, you have to learn from others. Being part of this project has made me question what we’re doing on our unit much more – I’m always happy to listen to advice and try to implement changes people have suggested.”

“The priority is now to work on gilt performance and retention to further improve the numbers born per litter and over the whole lifetime of each sow,” says Ms Cliff.

“David’s recorded data originally showed consistently low numbers born in the second litter, with 36% of sows having an average total born less than 10. However, there are already more gilts being retained to their second parity this year than last year, following a number of improvements throughout the breeding herd.

“This should start to improve the overall herd make-up and parity profile, with fewer sows in the later parities and more sows in the most productive parities.”