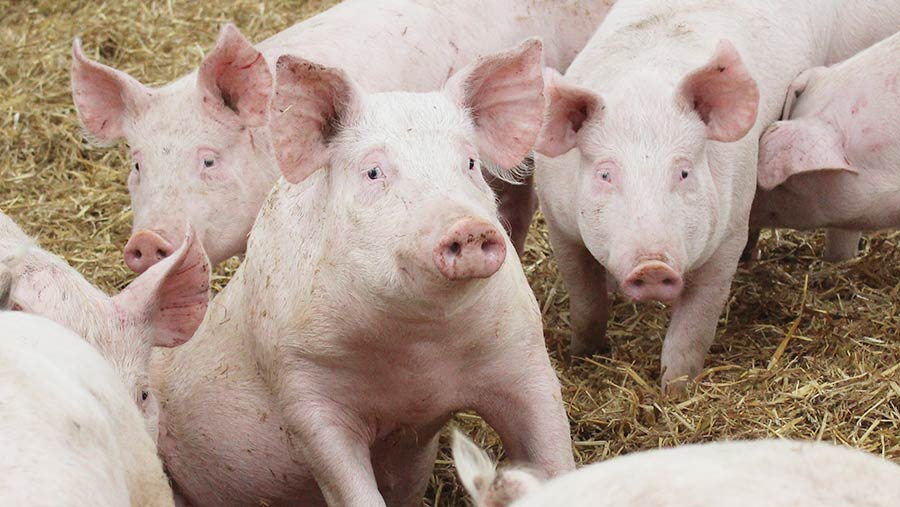 Yorkshire mixed farmers Simon Marton and his son, Andy, finish pigs on contract and find it works well in conjunction with their intensive broiler and arable enterprises.

The Martons, from Rise Farm, near Malton, have been working with independent pig agency Rent a Sty for the past three years and take just short of five batches of about 1,000 pigs annually, with mortality running at about 2%.

In turn, the bed-and-breakfast farmers look after 90,000 pigs at any one time.

Facts about Rent a Sty contracts:

Weaners arrive at selected B&B farms at four weeks and at 13 weeks old they are moved to finisher farms such as the Martons’, where they stay for 10-13 weeks.

Weaners are generally taken from 7kg to 40kg. After moving to the finishing farm, they are taken to 110-115kg liveweight.

The model is relatively low risk, with payment of half of the agreed fee made within 10 days of the pigs’ arrival, explains Mr Neal.

“This funds the purchase of straw, if necessary. The remainder is paid 14 days after exit, minus mortalities.

“The contractor receives an annual payment of £1.95/sq ft of accommodation provided, a rate that works out at £17.50 a weaner place, based on a stocking rate of 9sq ft.”

Meanwhile, payout for each finisher place is £31, based on 16sq ft; this is achieved only if the contractor achieves a seven-day turnaround between batches.

The pigs at Rise Farm are owned by large-scale producer Ian Mosey, based near York. The system suits the company so well that it recently invested £120,000 in extending its steel-framed pig shed.

The farm uses some of its own straw for the pigs, although a percentage has to be bought in, while farmyard manure is sold locally.

The bed-and-breakfast arrangement has done much more than allow Andy to work at home, he explains candidly.

“The broiler industry is highly volatile and it is not uncommon for us to lose money on one or more batches every year. The income from the bed-and-breakfast agreement and its effect on cashflow has been an important factor in helping our business to survive.

“Going into pigs was the right move for the farm, as it ticks two very important boxes: knowing how much we are going to be paid and when the money will come in.

We can put together financial projections a year in advance and that is a huge bonus. I actually prefer working with the pigs, rather than the poultry, so it has also added to my sense of job satisfaction.”

A typical clean-out will take two full days and involve mucking out and the removal of all the building fittings, followed by pressure washing and disinfection. The building is then left for at least 24 hours, to dry thoroughly.

In a normal week, the pigs will go out on a Monday, with a fresh batch arriving on the Friday.

In addition to the payout for each place, weaner producers are given 38p a pig place washed, while finishers receive 75p.

“Contract farmers do not earn more money by keeping pigs for longer than necessary, and those who achieve faster growth increase the number of batches a year and are therefore rewarded for the improved performance.”

No previous experience is needed for those considering diversifying into pigs, he adds.

“The main requirement for a bed and breakfast farmer is a high standard of general stockmanship. No previous pig experience is needed, as training is provided free of charge.

“The farms we service are mainly in north-west and north-east England. Most of the core producers are based in east Yorkshire, but there are simply not enough farms in the region to meet the current demand.”

A. B&B rates are normally higher for Freedom Foods because of the lower stocking density, and (in general) better-quality accommodation, with greater straw usage and other enhancements.

Although there is no set premium for Freedom Food pigs, the payments will be related to whether or not the operator has a batch “all in, all out” system or continuous production.

Q2. What return can I expect?

A. Currently 60-75% of B&B accommodation takes weaners at 7kg up to bacon weight.

Freedom Foods nursery payment rates are within a wide band, generally 35-45p a pig a week. Red Tractor is about 10% below this.

Some operations now run according to pig space. For example, the pig producer will make a flat-rate payment of, say, £35 a pig place a year and this will be paid across the board, whether full or empty, for the space that is available.

Other schemes pay contractors a percentage of the Standard Pig Price (SPP), with a lump sum paid “per pig out”, with bonus rates paid based on feed conversion ratio (FCR) and weight.

Some contract arrangements also provide the contractor with a payment for washing out when empty, and guaranteed levels of minimum income if pigs are in short supply.

Different payment rates will suit different contractors and their systems.

Q3. Are vet costs and insurance always covered by the supplier?

A. Vet costs are covered by the pig supplier. They are also responsible for the insurance of the pigs and the feed, but the contractor should insure the pig accommodation and equipment.

Q4. Will I be set targets for mortality?

A. Although targets can be set, sometimes these can be counterproductive.

If mortality is unduly high, penalties may be introduced – but they can also create disagreements between the parties, because it is difficult to know where the fault lies.

Where possible, on 35kg-to-finish units, a single source of supply is almost essential, whereas 7-110kg pigs can be mixed in the early stages without high mortality.

Q5. How much notice will I be given for unloading and loading pigs?

A. Contractors normally deal with loading and unloading pigs themselves. Handling notice periods of three to four days are generally required, especially if the contractor is also responsible for pig selection.

Q6. How long are notice periods?

A. Most contract agreements have notice periods of no less than one batch.

The nursery unit would probably have a minimum 12-week notice period, but this could be up to 24 weeks or even longer.

In many cases notice periods will be longer, but they need to match abattoir contract terms.