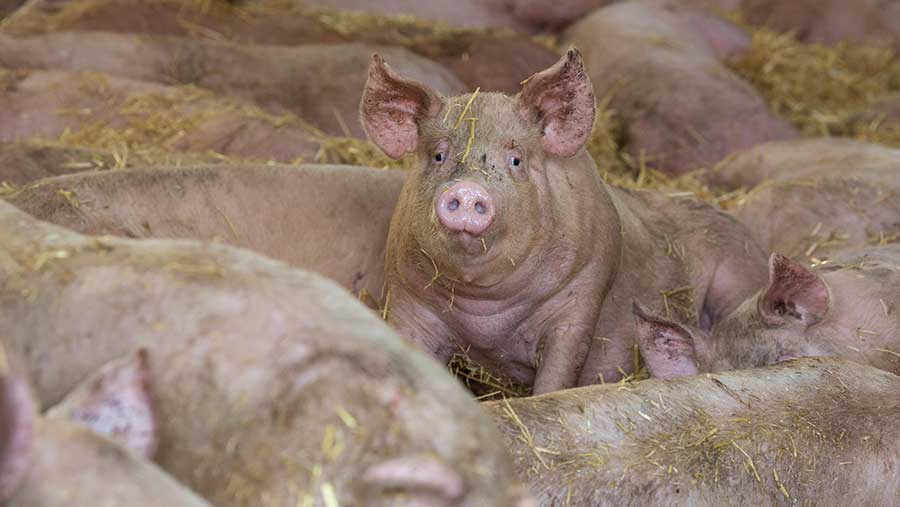 Antibiotics use in the pig industry has come under fire recently with figures released last week by the Veterinary Medicines Directorate suggesting it is the highest use sector.

However, work is taking place in the industry to reduce use and already sales of products licensed for pigs are down according to latest VMD figures, by 24% at 50t – the biggest fall across all the sectors.

Richard Pearson, a specialist pig vet from the George Veterinary Group, based in Malmesbury, Wiltshire, has been working with his clients to reduce antibiotics use.

The George Veterinary Group started recording antibiotics use back in 2014 – a move that proved prescient in light of the requirement Red Tractor introduced later that year to monitor its use.

With data for about 500,000 pigs collected, average use across the group’s client base was estimated at 120mg/kg liveweight.

From this point, as well as strategies to look at more accurate administration of antibiotics, Mr Pearson looked at how they could improve the underlying health of the animals they work with. 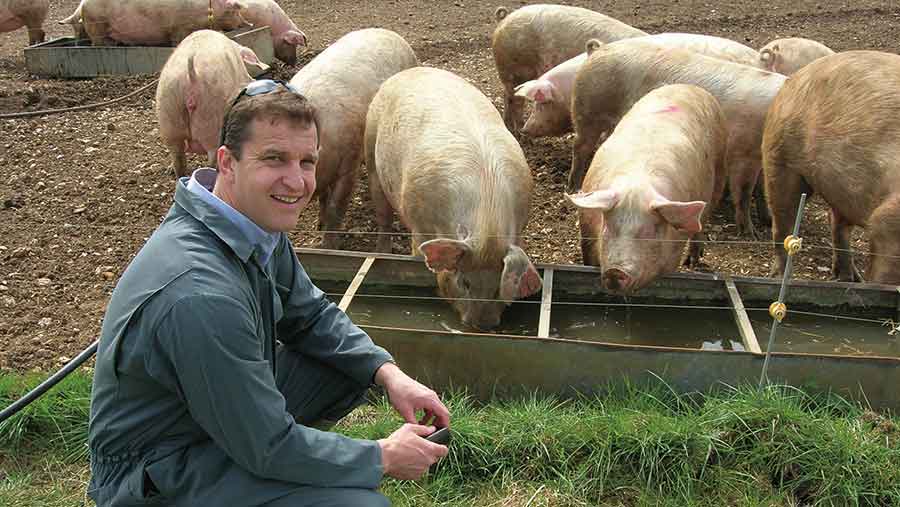 He explains: “Depopulation and repopulation with high-health stock may be needed to eliminate some pathogens such as swine dysentery or strep meningitis, but it is possible to reliably eliminate enzootic pneumonia [EP] from a herd of pigs using a targeted medication technique.

“The great advantage of this technique is that if it’s successful, all weaners produced henceforth are of a higher health status and shouldn’t need treating.’’

Mr Pearson devised a novel elimination strategy for 4,000 outdoor sows across five batch-producing herds in the south of England which tested positive for EP.

The farms all operate three-week batch farrowing, with pigs weaned into straw-based finishing systems, taking them to sale weight at about 115kg.

During the eliminations, starting in August 2015, each sow was prescribed a total of 31g of active antibiotics, which was administered under vet prescription in the feed over a six-week period.

The results were great – EP elimination was successful in all five herds and they all remain test negative well over a year later, says Mr Pearson.

“In effect, this targeted treatment of 4,000 sows removed the need to treat the 100,000 pigs they produce annually for for EP. A dose of 31g sounds like a lot, but spread across this number of pigs, it really isn’t.”

The EP elimination was just one strand of the new approach to health management within the pyramid.

Control of ileitis, a common condition in finisher pigs kept on solid-floored or straw-based systems, was also reviewed. Causing looseness and potentially reducing daily liveweight gain by about 35g a pig, ileitis was previously controlled through two pulsed antibiotics treatments when the pigs were 45-50kg and 70-80kg.

A sizeable investment in new “nudge-bar” type drinkers allowed a water-based vaccine to be fed instead.

“Overall, the new approach reduced average antibiotics use in all progeny from the five herds from 120mg/kg before the programme started to 20mg/kg by November 2016. It has also allowed us to remove all in-feed medication,” he adds.

“The effect is significant – these herds form about 1% of the national herd and have a net effect on 2-3% of national output in the pyramid as a whole.”

While the EP programme itself cost about £12 a sow (or 50p a pig weaned in the past year), there were other costs associated with new drinkers, disruption to gilt supply and biosecurity.

Mr Pearson estimates the significant accrued savings on in-feed medications and healthier pigs mean the investment was paid off in less than a year, with benefits now cumulative over time as more and more EP-free pigs are weaned off these sites.

“The success of this programme shows just what can be achieved by forward-thinking farmers who are prepared to try new approaches and work closely with their vets,” adds Mr Pearson.

“A critical message is these EP eliminations probably wouldn’t have been possible without the ability to add medication to feed.

“This demonstrates the importance of retaining access to effective antibiotics and application techniques for long-term strategic reductions.”

Top tips to reduce antibiotics use

1. Collate and review use with your vet

This is always useful as it allows for benchmarking and highlights areas of interest. In the future, recording through the centralised eMB database will help the pig sector report more accurate usage data.

2. Be brave and challenge the status quo

Always follow vet advice on responsible use, but don’t be afraid to try new ideas for health control such as eliminations, or novel vaccination techniques such as autogenous or water-delivered vaccines.

3. Consider how and when you treat your pigs

It is common sense, but the smaller and younger you treat your pigs, the less they will need.  Also, ask whether feed medication can be targeted more specifically, or replaced by water medication.

Both physical health on farm and British Pig Health Scheme abattoir surveillance data has been extremely useful in the past.

5. Have a can-do attitude