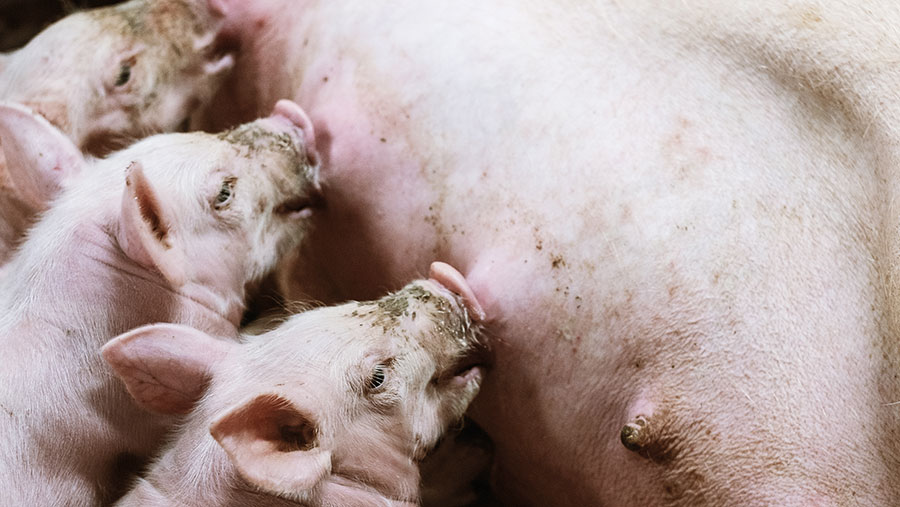 Pig production has always been a key component of both the farming and the curriculum at Plumpton College in East Sussex.

“It is a great enterprise for teaching due to the short production cycle,” says Ian Salmon, who manages Plumpton’s Lambert Farm.

“Unlike other livestock, students can see the whole cycle, from conception to consumption, over a 10-month period.”

The old pig unit was past its use-by date, he explains. “We also wanted to improve the welfare and performance of our animals, as well as the learning experience for our students.”

The college had already started on a £10m investment programme for various parts of the farm and campus.

This included the construction of a new Agri-Food Centre, a new butchery facility, and two robotic milkers.

But a new pig unit was high on the priority list, accounting for £1.5m of the available pot.

After two years of planning, contractors broke ground last August, and construction progressed rapidly, culminating in the transfer of sows and fatteners from the old unit to the new one in the first week of February this year.

Currently, there are 90 sows and 20 gilts, bought in from JSR as replacements, settling into the new facilities, plus almost 1,000 weaners and fatteners.

“But from what I can see, it is clear that the number of piglets a sow is already higher, with the first sows through the new unit averaging 12 weaned pigs a litter.”

But does combining practical farming and education compromise the economic performance of the unit? Mr Salmon is adamant it does not.

“The college principal demands excellence in everything we do, so we are fully commercial,” he says. “It’s the college’s vision to farm profitably, sustainably, and to demonstrate best practice.”

The finished pigs are sold to Thames Valley Cambac, and slaughtered by Cheales in Essex, typically going at 115-120kg liveweight.

“We’re aiming for Freedom Foods status, to generate a premium, and the plan is that some whole carcasses will come back for use in our new butchery school.” 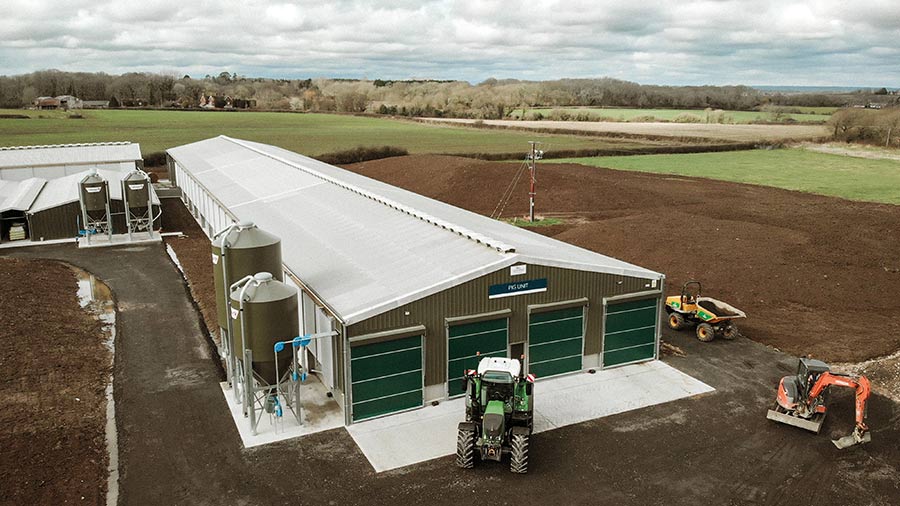 Mr Salmon says the unit has not been too badly hit by the current crisis affecting the pig sector – apart from the low prices and mounting input costs.

“We’re a fairly small player and our pigs have moved freely, apart from a couple of loads delayed at Christmas,” he says.

“The new unit does have spare capacity if needed, but luckily that has not been the case so far.”

Being a mixed farm, the different enterprises can also support others in times of economic strain.

The new site consists of three separate buildings and a covered muck store.

The new farrowing house has room for 40 sows and their progeny and incorporates some novel and high-welfare features.

The crates keep the sow contained for the first three to five days, then swing open to allow room for her to turn around, while still having escape areas for the piglets.

A computer-controlled feeder delivers feed to the sow four times a day, with a plunger for the animal to activate, to let the feed drop.

Ceramic heat pads provide warmth for the piglets, while transition feeders from GE Baker mix creep feed with warm water to form a porridge, so the young animals get used to solids prior to weaning.

The high-welfare environment throughout the unit means it is not necessary to clip teeth or dock tails, and windows along one side of the building provide a viewing opportunity for educational purposes.

Ventilation is provided by axial flow fans from Novax, and there is a sprinkler system for misting in warmer weather.

The sows are kept in groups of 20 or 40, in spacious, straw-bedded pens, equipped with the same automatic feeders as in the farrowing house.

The sows have electronic ear tags with transponders to allow for individual feed rations. They also generate useful data, for management and educational purposes.

A boar pen in the building helps with heat detection, and there are separate stalls for artificial insemination, using JSR genetics.

Having the animals in smaller groups makes for easier management, as the sows can establish a hierarchy.

A viewing gantry along the building is useful for teaching and for observing the pigs.

With space for up to 1,000 animals (including cull sows and replacement gilts), the finishing house is designed with welfare and efficiency in mind.

The piglets arrive as weaners, having received an anti-pneumonia vaccine, and are sexed and grouped according to size.

The groups of 50 move along the shed as they get older.

This enables the straw to be shoved from the “young end” towards the “older end” and out to the muck heap three times a week, which is good biosecurity practice.

The muck store is covered and bunded, with a 2,000-litre tank below to collect any liquid waste.

Data from a weather station on the roof is used to control the climate inside the house using Galebreaker curtains, which automatically respond to outside temperature and wind levels.

They keep the house warmer at the young end and less so at the older end.

The pigs have ad-lib access to a Duffields ration and, when ready for market, the finished animals walk the full length of building to the waiting lorry.

As part of the college revamp, a new butchery centre was opened in February. This provides butchery apprentices with a bespoke facility to learn their craft before hopefully finding employment in the meat sector.

Funded by the Rural Payments Agency and the South East Enterprise Partnership, the unit can accommodate up to 12 students, each at their own butcher’s block.

Overhead cameras at a central teaching block enable the apprentices to watch practical sessions close-up on large screens, without having to crowd around the tutor.

The butchery centre has cold storage facilities and freezer space to supply the college’s dining room and the butchery counter at the college-run One Garden Brighton retail outlet.

As well as supplying meat, the college says it is contributing to the national food skills shortage, training butchers who are in increasing demand since the post-Brexit clampdown on overseas labour.

“These facilities are going to provide a vital resource not only to students, but for local butchers and businesses as a hub for butchery training and education within the South East,” said Plumpton College’s principal, Jeremy Kerswell.