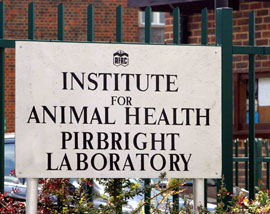 A senior official at Pirbright’s Institute of Animal Health has hinted that cases of the Schmallenberg virus could be high in the UK.

The Surrey-based laboratory joined the fight against the disease on Friday 3 February. The institute’s head of vector-borne diseases Peter Mertens, said it would be helping DEFRA and other stakeholders “with what might end up being quite a high volume of samples from suspected cases”.

“One major priority is to put in place reliable test systems, so that we can detect the virus and virus specific antibodies. This will allow us, to test and identify infected animals or insects,” said Professor Mertens.

Researchers at the institute are working with colleagues elsewhere in Europe, in particular the Friedrich Loeffler Institute in Germany which has sent samples of the disease to the Pirbright laboratory.

The pattern of transmission of this disease is similar to that of bluetongue, which is caused by an unrelated virus that is carried by biting midges, an IAH spokeswoman said.

It is currently thought likely, but not yet confirmed, that Schmallenberg virus can be transmitted by the same insect species which spread bluetongue. IAH has colonies of midges and mosquitoes that will be used to confirm if the virus does indeed infect these insects, which can then transmit it between animals, she added.

Simon Gubbins, IAH research leader in mathematical biology said: “Schmallenberg has been a complete surprise. It will now be a matter of waiting to see how seriously the UK and Europe are affected by this disease and in the meantime IAH and colleagues across Europe will be working to learn as much as possible about how to detect and control its spread.”

“If Schmallenberg is midge-borne we can begin to learn more about how it is passed on.”

“That helps us in two important ways: it means we can make predictions about how it might spread in the future and therefore consider whether there are suitable control methods which may lessen the impact. It will also tell us something about where it came from,” said Dr Gubbins.

Visit our special report on the Schmallenberg virus.