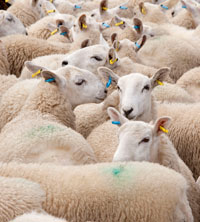 Manually read slaughter tags may still be legal, but producers should be aware of the pitfalls associated with not electronically tagging sheep.

This is according to Ted Ogden, Craven Cattle Marts, speaking at one of the event’s seminar entitled EID, are you really up to speed?

“When manually tagged stock are put forward during peak season sales, it is possible these animals could make less than those electronically tagged due to easier onward movements,” he said.

One third of sheep leaving a prime market do not end up in the abattoir and return back to a holding. When this is the case, on secondary movement, normal tags from individual holdings will have to be read manually on farm.

However, when stock are electronically tagged, the auction mart will be able to record for you.

A single electronic slaughter tag was introduced as a result of feedback from the EID consultation period, said Terry Gurnhill, DEFRA.

“One of the main reasons for introducing this tag was to keep a stable market price – this gives the widest opportunity to sell animals versus using a non electronic batch tag,” she stressed.

Choosing to use a single slaughter tag also gives more options, allowing producers to upgrade and keep a lamb for breeding. However, this is not possible for conventionally tagged animals.

However, DEFRA figures show only half of all slaughter tags sold are EID tags and according to Fearing International’s Andrew Cowan, some tag company’s have reported less than this being sold.

Speaking to Farmers Weekly, he said: “We are currently selling more non EID than EID slaughter tags. It is a transition year for farmers so they are still deciding what to do,” he explained.

But Shearwell Data are reporting sales of 80% EID slaughter tags compared to non-EID, which the company’s director Richard Webber said was due to price. “We recognise the need for voluntary slaughter tags and as a result brought the tag price down to a bare bones level to help farmers have an easier choice.”