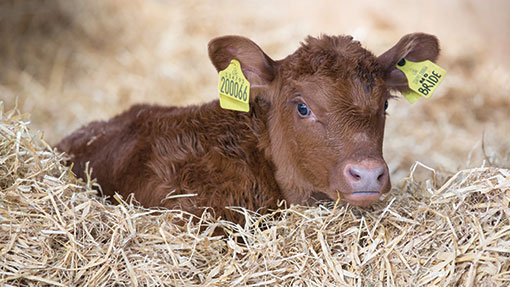 The aim of Farmers Weekly’s new series is to help farmers reduce the costs of pneumonia in calves. Caroline Stocks sets the scene with  a look at the results of an exclusive survey.

Pneumonia might not be a concern on your farm at the moment, but a pneumonia-free past is no guarantee the disease will not strike this winter.

More than a third of beef and dairy farmers who reported an outbreak of the disease last winter said it had come out of the blue after being disease-free for at least three years.

And when an outbreak does occur, the costs are significant.

While the average outbreak reported by farmers themselves costs £1,580, findings of an exclusive Farmers Weekly survey of 508 farmers, carried out in association with Zoetis, found the costs of pneumonia often reached thousands.

In the case of one producer who responded, that figure reached a staggering £30,000. 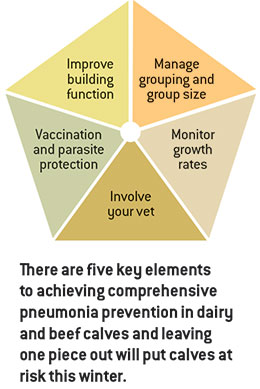 A review by Zoetis of published research found a pneumonia-free rearing period can be worth £243 a head in suckler calves and £1,008 a head in dairy heifers. To help farmers, the company has developed a five-point-plan (right) to minimise respiratory disease, both severe and low grade, during winter housing.

Good business involves anticipating problems before they happen. The majority (82%) said they had experienced a serious outbreak of pneumonia on their units, yet few (23%) think about it in the summer before the risk begins.

Mark Stott, director of Farmgate Vets in Lancaster, Lancashire, says planning ahead is vital to staving off the disease and ensuring cattle have the best chance of achieving their potential lifetime productivity.

“Prevention is always better than the cure, so now is a good time to be thinking about things such as vaccination, building design and any issues you might have,” he says.

“Once you have pneumonia on your farm it is difficult to act on it without great loss in production, so addressing any issues now makes sense. Otherwise when an outbreak occurs it’s just money down the drain.”

According to more than 70% of farmers, calf pneumonia remains one of the biggest economic threats to cattle production.

The disease results in longer periods to reach target weights, fatalities and expensive treatment, as well as healthy animals being put at risk of disease, loss of profits and lost time.

According to those surveyed, the average time taken to deal with just one infected calf is the same as the time it takes to deal with 35 healthy ones.

What’s more, with dairy cattle in particular, the disease leads to reduced productivity in cows.

Nearly all (96%) of those whose herds had suffered with pneumonia saw long-term effects, with longer finishing times, higher cull rates and lower milk yields.

Many farmers believe there are steps they can take to prevent the disease, with improving ventilation being the top measure, followed by reducing calf stress, vaccination and making changes to cattle housing.

But Mr Stott says it is important producers think of pneumonia prevention as a whole, rather than simply taking individual measures.

“Vaccination is important, but it is only part of the story,” he says. “Farmers need to think about their buildings and which animals they are putting in them.

“Think about airflows in and out of your sheds to ensure you have proper ventilation, and think about drainage, too. It is often neglected, but is crucial as pneumonia pathogens thrive in humid conditions.

“If you can, avoid mixing cattle of different ages, as older calves may be able to fight low levels of the virus, but end up coughing pathogens all over the younger ones.

“Also think about your vaccination plan to ensure your cattle have protection against the disease at the times they need it the most.”

According to the survey, about half (44%) of producers use vaccination as a way to tackle the disease. Those who do not vaccinate have their own reasons for not doing so, with 50% of those who saying it is unnecessary, and a quarter (24%) thinking it is too expensive.

A further 28% said they don’t do it because it has not been recommended by their vet.

Despite this figure, the survey found that a large proportion of farmers are already seeking professional advice on how to tackle the disease, with 62% having discussed calf pneumonia with their vet in the past 12 months. A large proportion (76%) say they are open to discussing it this autumn.

While it is encouraging so many farmers are talking about the disease with their vet, David Black of XL Vets says it is important not to leave those discussions too late.

“Farmers need to be thinking ahead and talking to their vet now as part of their herd health plan,” he says.

“That way they can get their vaccination plan in place and make any changes to their housing before the autumn and before the risks of pneumonia increase.”

Timing is critical in taking preventative measures against the disease, with the survey suggesting advanced planning by more farmers would result in more of them reaping the benefits from pneumonia protection.

A further 60% thought it would result in a higher return on investment in the long term, while 45% thought it was worthwhile if only to get a better night’s sleep by not worrying about the potential effects of the disease on their animals.

That relief alone can be worth investing in early preventative measures, says Mr Black.

“Even if you are concerned about the costs of making changes, it doesn’t cost anything to have a chat with your vet. The key is to start now, so you have more chance of getting better results,” he says.

“Ten years ago, if we heard a few calves coughing but they were still eating, we assumed they’d be OK and leave them alone,” says Mark Stott from Farmgate Vets. “Today, we know better.”

Things have come a long way in our understanding of how even mild respiratory infections can affect lifetime performance. This series is for readers who want the best possible health, welfare and performance from suckler beef or dairy youngstock.

It is brought to you in conjunction with Zoetis, the maker of Rispoval4 and Rispoval IntraNasal vaccines. Your vet can advise on a protocol for best use of the vaccines in an integrated health protection programme.

Find out more about protecting your livestock from pneumonia at Plan to Protect.