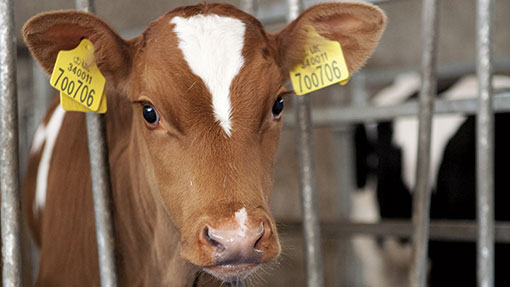 Bacteria that cause pneumonia are fairly widespread and can live in a calf’s respiratory tract without causing disease. In the final part of this series, Caroline Stocks looks at what triggers the disease and how to prevent it.

Being vigilant for the signs of pneumonia in calves is key to taking swift action this winter to reduce the damage the disease causes, as each case cost farmers an average £1,580.

But understanding the causes of the disease is just as important so that farmers know how to react to it, particularly with bacterial cases.

“There are a variety of bacterial causes of pneumonia, with the main ones being pasteurella, Mycoplasma bovis, Mannheimia haemolytica and Histophilus somni,” says George Caldow of Scotland’s Rural College (SRUC).

A bacterial infection often follows a viral cause of the disease, with the virus impairing the animal’s ability to get rid of the bacteria they are exposed to and the bacteria causing damage to the lungs.

The bacteria start to colonise in the upper respiratory tract and move towards the lungs, triggering a case of pneumonia.

“The toxins produced by the bacteria and the body fighting the infection cause tissue damage which, if left untreated, can be fatal, Mr Caldow adds.

As with all disease, prevention is better than cure, meaning that taking steps to minimise the risk of all respiratory diseases is vital, says Tim Potter of Westpoint Vets.

“The bacteria can actually exist in the respiratory tract quite happily without causing disease,” he says.

“But if an animal’s immune system is stressed or if it comes into contact with another disease, such as a viral cause of pneumonia, that’s when damage is caused.

“Farmers need to look at anything that will reduce the risk of disease.”

Mr Potter says the key recommendation with young animals is to manage their health and nutrition from when they are born.

Young calves should receive 10% of their bodyweight in good-quality colostrum within 12 hours of life to provide vital immune defence, while nutrition needs to be managed to reduce stress when they are weaned and housed.

“Then it’s about making sure the shed is clean and well-ventilated to clear the air of the virus and reduce gases and dust that can suppress animals’ respiratory defence mechanism.

“Also avoid mixing calves of different ages and animals from different sources, as that can challenge them, and think about potential vaccines,” he adds.

“The majority of vaccines are aimed at the viral causes of pneumonia, but there are some out there that deal with specific bacterial issues, so it is worth talking to your vet to find out what could be suitable for your herd.”

If the disease cannot be prevented, then early detection is vital, as once an infection takes hold it can be difficult to treat, says Mr Caldow.

“The first sign of disease is usually loss of appetite, so farmers should take the temperature of any animal that is off its food.

“Some animals may develop a nasal discharge or a cough and are likely to suffer from laboured breathing.”

While it usually takes a few days for an initial viral infection to develop into a bacterial colonisation, stock can deteriorate within a few hours, he adds.

Where there are one or two calves showing obvious signs of pneumonia, more animals in the same group are likely to be in the early stages of infection and presenting high temperatures.

An increase in outbreaks of Mycoplasma bovis means farmers should be especially vigilant for symptoms, says Mr Potter, as the bacteria can be especially difficult to treat due to a different sensitivity to antibiotics.

“Mycoplasma bovis can cause other symptoms such as ear infections, which start with the animal being slightly bothered and ear dropping, right through to head tilts and damage to the cranial nerve.

“Also be suspicious if animals are not responding to pneumonia therapy and you have to repeat treatments.”

If you suspect a bacterial infection, discuss a course of treatment with your vet, which could include antibiotics as well as an anti-inflammatory to reduce temperatures and encourage animals to feel well enough to eat and drink again, he says.

“Above all, you need to act quickly. Pneumonia is a disease that – no matter the cause – if you pick it up and manage it rapidly, the animal can recover and perform well through its lifetime.

“If treatment is delayed and you get too much damage to the lungs, they will struggle, have poorer liveweight gain and be at risk of secondary infections in later life.”

Recent cuts in farm prices for milk and beef show just how susceptible these enterprises are to such events. An uncomfortable truth is that these are largely outside of farmers’ own control. So, a strategy adopted by many is to focus instead on what you can control.

With this in mind, this series of five features has sought to help readers “Plan to Protect” their youngstock from the very real threat of respiratory disease this winter. By protecting youngstock, we hope to have shown how you are also protecting your dairy or beef enterprise from the financial drain arising from pneumonia – whether low-grade or serious.

For your own unit, the potential costs due to pneumonia – or, more positively, the gains available from effective prevention – can be illustrated quickly with a new planning tool, available at www.plantoprotect.co.uk.

This series has been sponsored by Zoetis, makers of Rispoval4 and Rispoval IntraNasal vaccines.

Read the previous articles in this series:

Part 2: Pneumonia in calves: How farmers can cut the risk