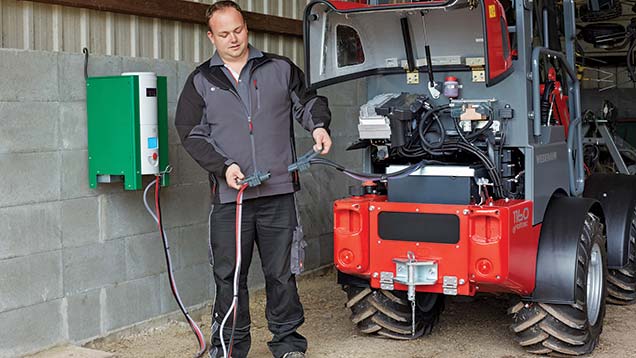 A poultry producer could visit the EuroTier livestock show in Hanover and, if money was no object, kit out a whole farm with the newest and shiniest equipment available. Jake Davies went window shopping.

Farm machinery business Weidemann’s has been in production for more than four decades. Over that time it has undergone considerable upgrades and amendments, but none so fundamental as changing the power from fossil-fuel to electric.

And it’s not just to boost the green credentials of a farm, either. The firm says electric-driven vehicles are quieter, keeping animals calmer, and produce no emissions in confined sheds.

Weidemann has undertaken a costing exercise against the equivalent diesel indoor loader in its range. Though the electric version costs around 20% more, the firm calculates that premium will be paid back after 2,800 hours. Assuming a 6,000-hour life, the electric Hoftrac will costs 41% less to run, offering significant savings – especially if the farm generates its own electricity in some form.

A battery charge will take eight hours (six with a fast charger) and operate for two to four hours. It has an assumed 1,200-charge cycle.

Water tune B from Agrel

According to Andrea Bruckmeier of Agrel, the Water tune B will create “unfavourable conditions” for the development of bacteria in water pipes.

Water is rarely poor quality from the source, explains Ms Bruckmeier. It is when it enters a poultry farm and is sent through pipes – a perfect breeding ground for bacteria – that problems arise.

The device is attached in-line and generates an electromagnetic pulse which, she says, prevents the build-up of biofilm.

Agrel also had on show sets of petri dishes that offered a low-cost way to test water quality on farm.

Ventilation outfit DACS says it designed its Magfan tunnel ventilation units around the fan, where all too often the box is the main consideration.

The box is a bespoke design that aims to produce the most efficient flow of air possible, while the fan is a direct drive permanent magnet motor, meaning no belts and less maintenance.

Independent tests have found it twice as efficient as the next competitor, said Jens Dybdahl, a partner in the business.

He admits that the system, which has an install time of around 30min, is more expensive than most. But in countries that are hot and have high electricity costs, or those with particular zeal for energy efficiency, it is worth considering.

Fancom was showcasing its air inlets designed with a point of difference. Where normal inlets are straightforward rectangles that can dump cold air on birds, Fancom’s Fantura system has been shaped to “shoot” air further into the shed.

According to sales manager Peter Marcelissen, the “jetstream” that the new inlet creates allows the cool air to mix with warmer parts of the shed creating a more optimal temperature.

There will always be demand for farmgate egg sales, and for many it is a welcome source of added income. But while the days of the honesty box may not be over for some, protecting sales from theft has become a key consideration for others.

The Regiomat egg-vending machine offers a way to sell produce 24 hours a day, seven days a week with little human effort involved. The unit is refrigerated, and deftly plucks egg packs from a shelf and deposits them – once shoppers have paid, of course.

Export manager Paolo Pabdolfi says his Modula feed pans for turkeys or broilers were manufactured to be as competitive on price as possible. But they are also suitable for farmers thinking of rotating turkey and broiler production, as is common in France.

The pans can be opened in sync for cleaning, and farmers have the option of purchasing a basic model, one with an integrated hood, and a third with a hood and screen to prevent chicks accessing the feed pan.

Gas-fired indirect heaters for poultry sheds do not form a crowded market, the more common systems being biomass-fired. But proponents of these systems suggest the cheaper initial outlay and the likelihood of a more stable gas price in the coming years make them an investment worth considering.

Elste Group says its Thermorizer heaters, which took 10 years of in-house design to bring to market, is just such an alternative.

The heater generates a laminar flow of air, which means swirls and cross flows are reduced, says the firm. As with an indirect heater, it is warmed air that is thrown into the shed, and the by-product of burning gas – water – exits through an exhaust flue.

Egg packing machinery maker Volker marked a move into larger egg grader systems with the launch of its new Novum 55 at the fair.

The model on display was literally the first off the production line.

The system will grade and pack up to 20,000 eggs an hour and has been designed with a few key points of difference, explains Tobias Volker, a sales manager. It is built from stainless steel with ease of cleaning in mind, and warnings are given pictorially, reflecting the fact that those employed by egg packers often don’t have English as a first language.

It also grades eggs point down, keeping breakages at a minimum.

Negative ions will collide with dust in the shed that has a positive charge, causing them to combust. This can reduce the level of particles significantly. It is a straightforward way to reduce airborne nasties in an industry that is placing ever-growing scrutiny on their control.

The LED itself keeps the same spectrum as daylight and, according to the manufacturer, is more effective given the reduction in dust levels.

The most powerful of the bulbs will emit 250m particles every second, but managing director of Gasolec, Henk Ruiken, admits getting the exact number of ions needed is still work in progress.

In-line feed dosing is not common in the UK, where nutritional additives are mixed in with initial feed formulations and medication is usually administered through water.

Not so on the European continent, where medicating feed is more common as are adding performance-boosting additives mid-cycle. Raijmakers Agro was showcasing its range of in-line feed dosers at Eurotier. The devices range in size based on the amount of feed that might need to be mixed in and contain mixing rods to prevent powders “bridging” and to ensure products mix with feed effectively.

A newly hatched chick without access to feed and water will lose 8% of its bodyweight every 24 hours.

Not a problem for those in the hatching tray that emerge just before delivery to farm. But the early birds could have a 36-hour wait for feed.

The solution, according to Michiel van Veldhuisen, a sales manager at Dutch firm Hatchtech, is to hatch chicks directly into a catching crate, with immediate access to feed and water. Just 1g of feed directly post hatch will aid absorption of the yolk sac and kick start gut development, he says.

Mr van Veldhuisen says the firm bought a patent for such a design and set about creating its Hatchcare system – a stackable system that affords birds access to feed in the hatchery as soon as they emerge from the egg.

Two tracks are lowered to about six inches from the floor of a shed, where feed and chick paper is offered in the usual fashion. Racks of eggs are slid along the tracks and their suspension affords good airflow during hatching. Birds hatch, then jump straight from the eggshell to the broiler shed floor, and have immediate access to provisions.

Day-old chick quality is important to all poultry farmers, but especially those in France where there are specified legal standards.

Animal nutrition firm CCPA Group has developed a tool to determine the likely health of broilers in their infancy, and thereby later life.

Its Axiscale service involves a farmer taking 10 chicks from a newly arrived flock. The firm will analyse both the antioxidants in the body and monitor any inflammation present within the sample, and use this to determine a traffic light “red, amber or green” score, suggesting the likely health status of the rest of the flock over its life.

CCPA Group can then make recommendations on nutritive improvements.