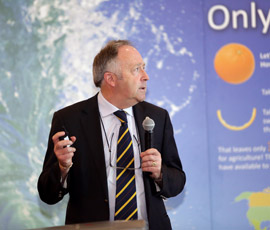 Broiler supplier 2 Sisters Food Group is claiming to have cut its energy costs by 40-50% as a result of its carbon footprint work.

Speaking at the Alltech Symposium in Kentucky, USA, this week, Philip Wilkinson, a director at 2 Sisters, explained that the company has been on a farm expansion programme since 2010, which includes modernising and replacing out-of-date poultry buildings.

Some £20m has been spent so far, with another £76m of investment planned for the next two years to expand capacity while improving energy efficiency.

Mr Wilkinson said that, as one of the biggest suppliers of chicken to Tesco and KFC, 2 Sisters is committed to playing its part in reducing carbon emissions and focusing on the sustainability of the business.

New buildings have been put up with state-of-the-art heating and ventilation. The new structures will enable the company to increase the growing space by one million birds a week as part of its five-year plan, improve welfare standards and reduce its energy bill.

Both old and new buildings are benefitting from a strategy to cut energy use and 2 Sisters’ goal is to generate 100% of its own electricity from renewable sources by the end of this year. This policy will only apply to its own facilities for now, and not those recently acquired in the Vion takeover.