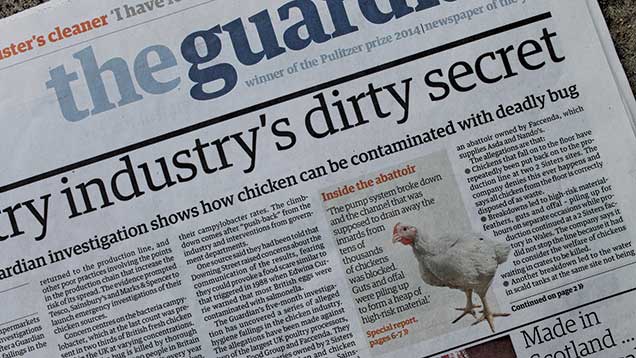 The phrase “never a dull moment” springs to mind when reviewing 2014 in the poultry industry. Philip Clarke and Jake Davies take a look back

Of all the stories Poultry World covered in 2014, it was campylobacter that occupied the most column inches, reflecting its importance to the sector and its appeal to the wider media.

Widespread coverage began in June when the Food Standards Agency made “don’t wash chicken” the theme of its Food Safety Week. The message was spread far and wide, along with the notion that chicken was contaminated and might be dangerous to eat.

One survey released at the time indicated that only 28% of consumers had ever heard of campylobacter, but that statistic was bound to increase as virtually every newspaper in the country picked up and ran with the story.

Attention then turned to processors and farmers, and what they were doing to get campylobacter under control. In the Guardian’s view, not very much. In August the newspaper made a series of allegations against 2 Sisters Food Group and Faccenda Foods, suggesting they were exacerbating the problem.

The newspaper had undertaken secret filming and interviewed ex-factory workers before alleging the industry was not working hard enough to combat the bug and accusing the FSA of a cover-up.

The FSA eventually found 2 Sisters had breached hygiene rules in one instance, but that it was “satisfied that corrective actions have been taken by the company”.

Later that month (August) the FSA released its first quarter testing of campylobacter on chicken at retail. It found 59% was contaminated, but elected not to “name and shame” individual retailers, reversing an earlier commitment to do so.

It instead held off until late November, when six months’ worth of data had been collected. Amid intense media scrutiny, Asda was named the supermarket with the highest contamination, and Tesco the lowest.

The upheaval created by the 2013 purchase of Vion by 2 Sisters Food Group continued in 2014, as the market leader set about restructuring its operations.

Scottish producers bore the brunt, with production downsized at Coupar Angus, and contracts cancelled with producers in the borders and North-East regions. Other contracts were reduced to just five-and-a-half crops a year, and free-range producers were also culled.

NFU Scotland estimated that 135,000 birds a week had been taken out of the system.

2 Sisters subsidiary 2 Agriculture also sold its breeding and hatchery business to PD Hook – which subsequently closed its Inverurie hatchery – and sold its farming and live bird haulage operation to Hook 2 Sisters. The planned sale of its feed business to AB Agri fell through.

Elsewhere in the meat sector, Cargill Meats Europe continued with its expansion in the West Midlands, Faccenda bought Cherry Valley Foods’ duck processing business to add to its turkey and chicken activities, and Moy Park emerged as a principal sponsor of the World Cup finals in Brazil.

The first case of H5N8 avian influenza on the European continent in German turkeys in early November proved a harbinger of things to come.

Within days a further case had been confirmed in the Netherlands, and then on a farm in East Yorkshire.

In the UK it was a Cherry Valley breeder farm hit by bird flu, and 6,000 ducks were slaughtered as a result. A restriction zone was set up, limiting the movement of eggs, birds and manure from poultry farms within it.

The situation became tense, with biosecurity stepped up across the country  as the industry looked out for further cases. Units within the zones struggled with the build-up of stock and manure, though Defra moved fairly quickly to start issuing movement licences.

The Netherlands had it worse, being blighted by four confirmed outbreaks to date. Each outbreak triggered a national halt to movement of eggs and birds export markets have been closed and the cost to industry is being put in the hundreds of millions of euros.

It was an “up and down” year for egg producers – as evidenced by the various graphs Poultry World produces in its market section.

Going up was the size of the laying flock and the supply of eggs to packers, courtesy of an increase in chick placings in the first part of the year. It was therefore somewhat surprising to see the wholesale price of eggs also on the rise in the second half of the year.

Free-range eggs were said to be especially short, with most people pointing to aggressive retail price promotions by the supermarkets which has boosted demand. Six free-range eggs have cost £1 (or less) for most of the year.

Despite this, producer prices have been under pressure, with an early round of cuts by the packers only partly reimbursed towards the end of the year.

But feed prices also weakened throughout 2014, such that most free-range egg producers are now making a margin of over £5 a bird – the best financial performance for a long time.

Happy birthday to us!

First published as The Fancier’s Gazette in 1874, the magazine decided to celebrate the anniversary in style, with a special edition packed with stories and trivia from the past.

But that meant first finding back issues of the magazine. Following extensive enquiries of the great libraries in Britain, we found an almost complete set at the Bodleian, Oxford University.

Armed with back copies we were able to review the technical, business and general history of poultry in the UK – and unearthed an egg collection scheme set up in WW1 by the magazine to provide nutrition to wounded soldiers.

We also surveyed our readers to find “Poultry’s Greatest”. Turkey producer Derek Kelly emerged as your favourite “living legend”, while Edwina Currie’s ill-judged salmonella comments in 1988 was the “greatest disaster”.

The year in numbers

Favourites from the Feathered Forager

A funeral for a frozen chicken, hen racing and being doused in ice water (in the name of charity). Gunter, the Feathered Forager has had a busy year.

His offerings from the web serve as a reminder that chickens somehow attract the funny, strange and downright bizarre.

The last 12 months has seen unusually large eggs, coloured eggs and a restaurant adopting a cock-shaped logo (not the poultry type, either). Further highlights have included virtual reality chicken helmets and a singing egg merchant.

Celebrities have been no stranger to the Feathered Forager this year, either. Gunter has met David Seaman, baked a cake for Great British Bake Off star Sue Parkins and written about the errant egg throwing of pop sensation Justin Bieber.

Foraging beyond the office has also continued, including trips to Vienna, Hanover and Wembley. But his biggest adventure came when he was strapped to the back of a bike and joined PW reporter Jake Davies for a 140-mile charity bike ride from London to The Celtic Manor in south Wales.