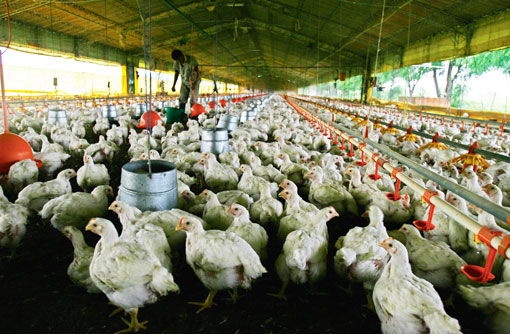 For decades, Brazil has been a leading world producer and exporter of poultrymeat, while its large South American neighbour, Argentina, has taken a back seat. Now things look set to change. Ken Randall reports.

Poultry producers and exporters in the EU face a new threat from a low cost production base.

Broiler production in Argentina has been expanding rapidly and its industry shares many of the advantages enjoyed by Brazil, including being a leading world producer/exporter of both maize and soya beans.

A new report from Rabobank predicts that Argentina’s poultry sector is destined for strong growth and is well placed to meet the growing global demand for poultrymeat, posing yet another challenge to the EU poultry sector.

“Argentina has only recently entered the world market, but as one of the lowest cost producers in the world, with a favourable sanitary status and the capacity to expand production, it is one of the key players that can step up to the challenge of meeting some of the growth in demand,” says Rabobank.

“Argentina’s advantage as a producer of corn (maize) and soya beans, combined with favourable government policies, provides its poultry industry with feed at highly competitive prices.

“The industry expects exports to double in the next 10 years, placing its products in the high growth and value markets such as the EU, Middle East and Asia.”

At present the industry is running at “full capacity” and compared to Brazilian operations, the scale remains small.

Successful expansion over the coming 10 years will rely on several factors, including continuing investment in production and processing facilities and increased access to foreign markets, the report suggests.

But the Argentinean poultry sector has already shown what it can achieve. Between the years 2000 and 2010, domestic output rose from about 900,000t to more than 1.5m tonnes, a rise of more than two-thirds (see graph, bottom).

Exports have performed especially well. In 2000, the country was a small net importer, but from a near-standing start, exports have risen to close to 300,000t, with a value of some $500m last year.

The industry is supported by a strong domestic market, where consumption has expanded by 30% over a decade to reach 34.4kg a head in 2010.

The renaissance has stemmed from the coming together of a series of favourable trends, including a strategic programme by the industry itself, and a friendly government tax regime.

Previously, the Argentinean poultry sector had been disadvantaged by an overvalued rate of exchange, which damaged the country’s international competitiveness generally, suggests Rabobank.

But following the devaluation of 2001-02, this situation was reversed, and Argentina became one of the lowest-cost producing nations for broilers, a position it still enjoys.

• Campaigning for protection against “dumping” of product by the Brazilian poultry industry.

As with modern poultry sectors in competitor countries, the industry is around 95% integrated, with the main processors setting standards, upgrading farms and achieving traceability.

Government policies have also greatly helped the sector, in the form of export taxes for maize and soya beans of up to 32%, which promote the use of crops domestically. By contrast, the export taxes for poultry products are much lower, not exceeding 5%.

In addition, those producing poultry for the domestic market receive substantial subsidies on maize and soya purchases if the cost exceeds a reference price, which is set well below the commercial price. During 2010, the market price for maize was nearly double the reference price.

At present, 20% of output is exported to a total of 58 markets, and Argentina is now the world’s sixth largest poultrymeat exporter. Last year, the top three destinations for Argentinean poultry exports were Venezuela, Chile and China, which took 54% by value. 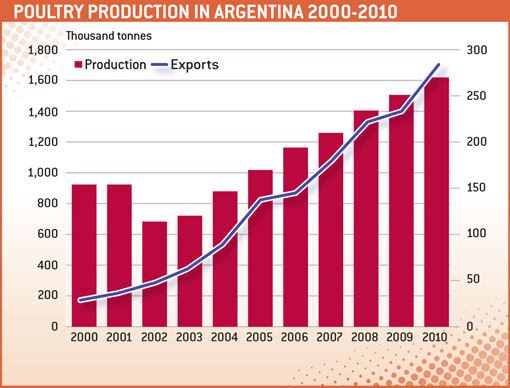