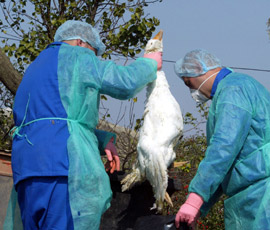 Mexican officials dealing with an outbreak of avian influenza have declared a state of national emergency.

The news comes as the World Organisation for Animal Health has confirmed China is dealing with a fresh outbreak of the disease.

H5N1 was identified in a remote part of north-west China, in the province of Xinjiang on 2 July. It is the latest in a string of outbreaks in the country.

The previous case was reported in Gansu, north-west China on 1 June, when 18,460 birds were killed.

Approximately 5,500 birds tested positive for the strain, and 1,600 died at the farm in Xinjiang, which is believed to be run by a semi-military government organisation.

Around 155,000 birds have been culled at the farm to contain the outbreak.

Meanwhile in Jalisco, western Mexico, officials say they have localised the disease, but have declared a state of emergency as they prepare to start vaccinations to contain the spread.

In total over one million birds are believed to be susceptible across three farms in the state and over 200,000 have already died from the outbreak. A further 60,000 have been destroyed.