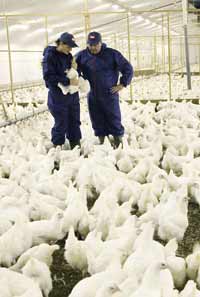 One of the main reasons why broiler breeder flocks don’t achieve their goals is the drop in egg production persistency. Flocks have a good peak, then production drops too fast after 40 weeks of age.

Persistency is expressed as a production index number, or “PI”. That is the percentage of production added to the age of the flock, starting at peak production. As an example, a flock at 30 weeks of age with 84% peak = 114.

Production persistency is maintained by following these guidelines:

1 Have a good sexual uniformity at 23 weeks of age that will guarantee a good peak production and production persistency over 80%. Sexual uniformity also includes fleshing and fat uniformity, so that the females are in the best possible condition to continue producing well.

2 Do not over-stimulate with artificial light (Table 1) and try not to go over 15 hours of total light. Some companies using a maximum of 14 hours’ total light achieve improved liveability and better persistency.

4 Avoid bringing the flock into production before 23 weeks. Be especially careful if the females are not properly prepared to start laying. Early production will result in a good peak but less persistency, with more wear and tear on the feathers and smaller egg size.

5 Avoid overweight birds after peak production by reducing the feed on time.

Normally when peak production is achieved, feed reduction can be implemented with 2g/week for two weeks and then with 1g/week till 40 weeks of age. After this period reduce more slowly, 1g every two weeks. Many flocks become overweight three to five weeks after peak production, indicating excess feed was available in peak or just after peak.

6 By contrast, do not let the females plateau in weight gain. Females need to continue to gain bodyweight slowly so that production is maintained.

7 Try to avoid any change in feed ingredients at 40-45 weeks of age. Every change is a stress that can lead to a production drop from which the females may not recover.

8 Feed quality and feed consistency is very important to maintain production performance. Without consistent quality the feed reduction programme will be compromised and not result in the desired effect to control bodyweight and maintain production.

9 Any management error related to feathering condition, light, watering or the feeding programme will result in production swings and drops.

Birds with the big light increase came earlier into lay but had a poorer egg production after peak, resulting in 10 fewer eggs. The FFT birds had higher embryo mortality, which resulted in fewer chicks. This indicates that egg and chick production can be compromised by overfeeding early in lay, and over-stimulation with light too early will decrease persistency.

The decision to stimulate the birds with light depends on the following conditions:

 Bodyweight of the birds is on or above standard – around 2250g

 Bodyweight uniformity is greater than 75% 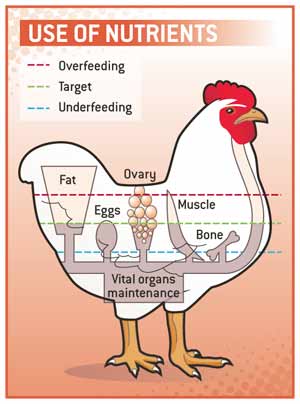 Getting the right amount of feed to the birds at the right time is one of the most important parts of raising broiler breeders.

The diagram shows how a broiler breeder needs to supply the feed to the organs, bones and muscles.

The maintenance of vital organs, bone and muscle have the highest priority followed by reproduction. Oversupply of nutrients results in excess fat and excess follicle production, which lead to sudden death syndrome and haemorrhagic liver syndrome.

This is most critical when the birds are coming into production. Hens need the energy to maintain their body weight, growth and egg production. When birds get too many nutrients they produce more body fat, increased follicle development and excess muscle. Overfeeding is linked to reproductive disorders and poor persistency of lay. Some of the extra nutrients lead to excess fat, with a negative impact on production.

As a general rule, for every 200g more of bodyweight after peak, the bird needs 5g more feed for maintenance. Females can rapidly become 200g overweight after peak if the feed amount is too high. For that reason, feed reduction in general should be started within one week of peak production and can often even start in peak production. Total feed reduction from peak should be between 8-14% depending on the time of the year, production persistency and bodyweight.

Nutrient shortage will result in smaller and/or fewer eggs. When broiler breeders don’t receive enough nutrients, both their body-weight and egg production will decrease. These should be measured frequently and feed allocations based on these figures.

Our general advice from Cobb is a conservative feed programme – about 120-125g/bird/day at 1% production and peak feed at 65-70% production. To reach a good peak production and persistency, a Cobb broiler breeder needs about 24-25g of protein and 465kcal with mash feed or 450kcal with pelleted/crumble intake.

At Cobb we regularly complete flock analyses for customers and then find trends to improve performance. An example of a flock analysis is shown left comparing the 25% top and 25% bottom flocks.

Overall, between the top and the bottom flocks there was a difference of 14.2 in total eggs and 16.7 in hatching eggs. Birds coming later into lay produce heavier egg weights and fewer double yolks then their earlier maturing counterparts.

With a flock of 10,000 breeders and an average hatch of 83%, the financial difference is very significant:

This shows the value of good management and just why the breeder manager should monitor flocks regularly to check bodyweight and egg production, and make any necessary adjustments.