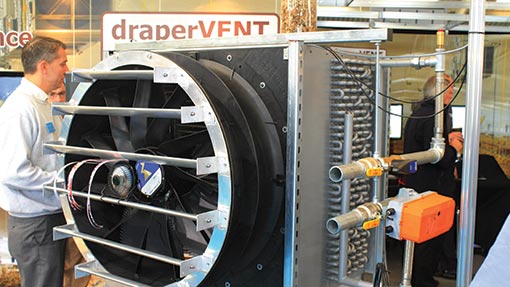 The new draperFANCOIL HW system was the centrepiece of the DraperVENT stand at the Fair, which focused on improved bird performance.

Developed specifically to meet the firm’s heating contract with Moy Park, the unit is now available to any broiler producer looking to convert to indirect heating using hot water.

Four units will provide sufficient heat to achieve brooding temperature evenly across a 300ft x 80ft shed, says the firm. Each coil offers 50kW, and there is a 75kW version for longer sheds.

It is fitted with a 800mm diameter high performance fan from Ziehl Abegg, driven by a new ECBlue motor, with built-in inverter technology that uses up to 50% less energy. It also incorporates one of Ziehl’s new FFowlet impellors, which offers high performance with low noise levels.

The heating coils are copper, plated with tin to extend shelf life, and they are finless to facilitate cleaning.

They come with a simple to use control panel, which can be linked to a mobile phone.

The unit that Gordon Fielding, director of H20 Manager brought to the Pig & Poultry Fair this year was the first of its type to touch UK soil.

Once installed on-farm, it takes a small percentage of the total water entering a shed and electrolyses it, producing a solution called Neutholyte. This bird-safe formula is then fed back in to the main water supply at about 2ppm and will prevent bacterial colonisation and biofilm, according to Mr Fielding. 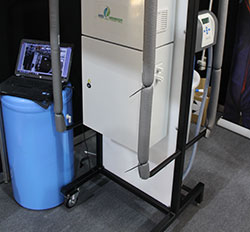 He says it will also remove the presence of bugs such as E coli, salmonella, staphylococcus and campylobacter, “subsequently improving the health of livestock, quality control of food absorbtion, antibiotic spending and mortality rates”.

The solution can also be misted into the shed, cutting ammonia and dust levels, and used as a chemical-free cleaner at depopulation.

Mr Fielding points to a trial on an EU farm, in which results suggested a £25,000 a year saving with a hire purchase scenario.

Big Dutchman released its Primus UK brooding unit at the fair, geared at getting chicks destined for multi-tier off to the best possible start,

Rearing pullets in a multi-tier style-unit is a known way to get quick adoption when they are moved to a commercial farm. Having a brooder off the ground also means less heat is needed and provides a more controlled environment, according to Adam Dye of Newquip, the UK distributor for Big Dutchman. 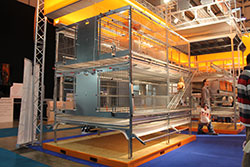 “As the birds get bigger you can raise the drinkers to the right height, you can give better access to the chain feeder and gradually we open up the system so birds have more and more room,” he says.

The unit is then opened up and birds can begin to move between levels, all the while associating feed, water and nesting areas with the second and third tiers. There is a liftable canopy preventing pullets getting underneath the unit, discouraging them from laying floor eggs later in life.

The system is an adaption of a European unit designed to meet Freedom Food standards. This means that instead of three tiers there are two, and more space is given in each compartment.

Adaptation was the name of the game for another firm at the fair. French farming machinery outfit Manitou launched its new TMT 27p telescopic forklift, also refitted for the UK. “It’s fitted with fully waterporoof electrics and the telescopic boom that we patented in 2005,” said sales manager Alex White. 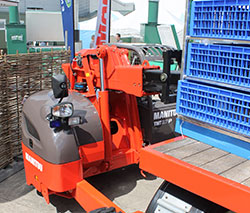 He adds the machine has “very good visibility, is very lightweight for the capacity it is, and very easy to clean down. For the poultry industry, it’s very good from a hygiene point of view as well.”

What makes it different is the design, tailored with the UK market in mind. Its lower size – just under 2m – makes it a fit for the smaller, older sheds typical of many British poultry farms. 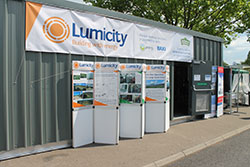 Renewable energy firm Lumicity featured one of the biomass “trade pods” destined to be shipped to one of the 179 Bernard Matthews turkey farms set to get biomass in the coming months.

The unit, about the size of a shipping container, is designed to be attached to the side of a poultry shed and installed quickly “with as little disruption as possible”, according to business development manager Steve Molineux-Wilkes.