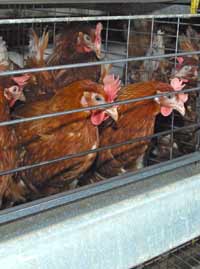 The warning comes from Ilka Hertogs, secretary at the Flemish Industry Poultry and Rabbit Producers (Vepek), as reported this week by World Poultry.

Figures published in the latest Vepek year review indicate that 206 out of 345 Belgian layer farms still use conventional cage systems. Of the total flock size of just over nine million layers, an estimated 7.5m are still in conventional cages.

In 2008, Vepek found that out of the 139 layer farms that had moved to alternative housing systems, 53 opted for free-range layers (with a possibility for the poultry to go outside), while 55 chose a conventional free-range system.

However, Ms Hertogs expects the majority of the poultry producers will not be ready in time to meet European requirements.

“This is partly due to a lack of clarity about future regulations with respect to animal welfare. Also, in the disastrous financial situation in the years after the 2003 avian flu crisis, it was difficult for poultry producers to invest.

“In addition, many producers are faced with the problem that their current poultry houses are relatively new, which doesn’t make new investment logical. They will continue using the current houses,” she said.

In another development, the Belgium government has confirmed it plans to ban enriched colony systems from 2025. Therefore, barn, free-range and organic would be the only systems permitted after that date.