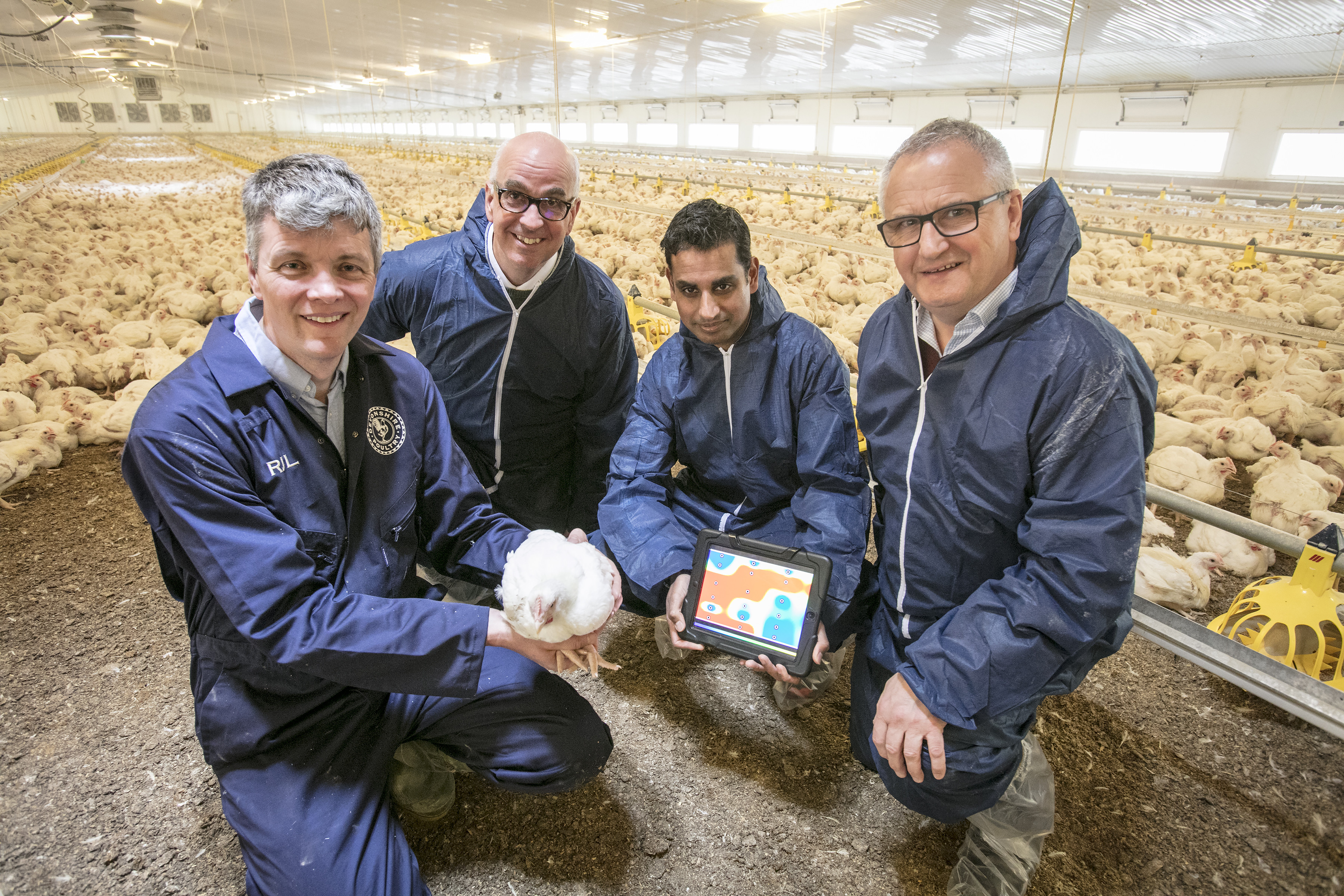 Isolated poultry producers beset by poor broadband coverage are receiving a helping hand thanks to a new partnership between telecommunications giant EE and agri-tech firm PrognostiX.

EE has begun rolling out its Rapid Site product to the farming sector, claiming it can provide 4G coverage on almost any farm at significantly lower cost than satellite links. The company says it can have a new site up and running with full 4G connectivity via wifi routers linked to external directional antennae in just three working days, enabling farmers to access super-fast internet when they need it most.

Garry Mistry, EE senior propositions manager, says the product had been tried and tested in the construction sector. “We launched the product in 2015, about three years after the launch of the 4G network because we felt we could do more to help different sectors.

“Firms in the construction sector have to go on to greenfield sites and often have no fixed connectivity even though they can be dealing with multi-million pound projects. Setting up traditional communication can take a long time, but by having 4GEE connectivity on sites it has saved businesses time and money through more efficient site management.”

Better broadband for agriculture – a logical next step

While 60% of EE’s Rapid Site business has been with the construction sector, Mr Mistry says the firm was also working with retail companies and the public sector, and felt agriculture was a logical next step.

Alan Beynon, PrognostiX director, says farmers were already embracing technology and the opportunities to use real-time data to aid management decisions were tremendous.

Mr Beynon, who is also director of St David’s Poultry Team, adds: “Modern equipment is capable of sending large amounts of information to be processed on a single computer but at the moment wireless connectivity is a huge barrier on farms.”

The impact of slow internet on farm business

EE and PrognostiX have been working with Devonshire Poultry owner Robert Lanning at one of his 6 broiler farms high up in the Blackdown Hills to set up a connected farm project.

Mr Lanning says the slow internet speeds were really hindering the business. “We were at the end of the line with regard to internet speeds and having to work with 2 megabytes/second which meant that sometimes even sending a small email took an age.

“You could forget about using the computer on Saturday and Sunday evenings and it was having a real impact on our work. We were having to download stuff at the end of the day and ask staff to do work from their homes where the speed was quicker.

“My wife was struggling with the SAGE (accounting) package and the quarterly accounts were having to send laptops with internet cables to download information and even send the accounts using memory sticks. The last straw was trying to sell a generator online – I couldn’t even get on to e-Bay,” he says.

By incorporating Rapid Site, Mr Lanning has increased his download speed to 73 megabytes/second, allowing the site to be hooked up to Prognostix Predict and Prevent, enabling the installation of multiple ‘smart’ sensors in one of his poultry units that houses up to 50,000 birds.

Going form 4 to 36 sensors to monitor the birds

In the past, he had 4 hard-wired sensors providing real time, albeit slow, information about the temperature, humidity and CO2 levels within the 27,000 sq ft shed. Now, with the advent of new technology, he has 36 sensors monitoring the birds, providing real-time information at speeds that were unthinkable just a year ago.

Real time analysis can pick up, for example, any issues with the ventilation system much more quickly.

“We start thinning at 32 days and so if there is any problem that is missed for 12 hours, it is a significant period in the bird’s life. So the quicker we pick things up the better it will be for our margins.”

He is keen to introduce sensors on his drinking lines and would like to test lines at different heights to see the impact it has on consumption levels among the broilers. “If you get experts in a room, they all say something different but this would provide real evidence.”

Keith Evans, PrognostiX technical consultant, says the advent of low-cost wireless sensors provided real potential to monitor the flock from a zonal perspective: “Rather than just looking at how a crop of 50,000 birds were faring, you can concentrate on zones of 5,000 birds.”

Mr Lanning is keen to utilise battery-powered wireless sensor portable weighing machines, and real-time water metering – both tools which will help farm management. “While there is nothing like staff picking up and weighing birds, we do need to send in weights to 2 Sisters’ abattoir at Willand two or three times a week and this would help provide information early of any deviation of weights.

“I could see from a temperature perspective that these sensors could be right across the sector from the hatcheries to processing. Egg, chick, farm and transport temperatures could all be monitored,” he says.

While he doesn’t think the additional information will add a premium to his birds, it is complementary to the policies of both Assured Chicken Production (ACP) and the Red Tractor Assurance (RTA) scheme.

In addition to Rapid Site, PrognostiX and EE are also offering Connected Vehicle, which provides 4G wifi on the move. “Vets and farmers increasingly demand internet access in the field. You can complete reports, access farm or veterinary records, and get work completed instantly rather than wait until you’re back in the office,” says Mr Evans.