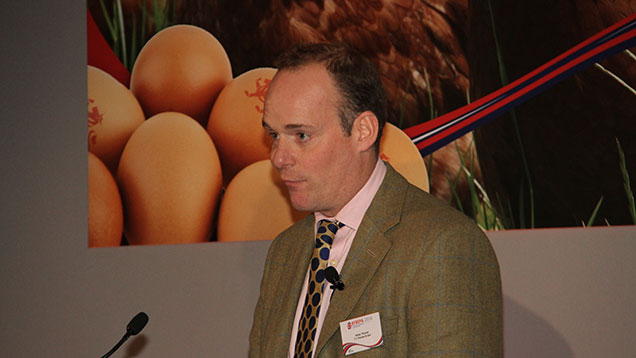 Free-range producers must tighten their biosecurity and Defra needs to react faster if the UK’s outdoor flock is to avoid the threat of avian influenza, according to the new chairman of the British Free Range Egg Producers Association, Myles Thomas.

Talking to Poultry World at the recent Bfrepa annual conference in Birmingham, Mr Thomas said free-range birds should be housed immediately until the full situation is known following the outbreak of the H5N8 strain on a duck farm in Yorkshire last month.

“You can keep disinfecting boots and wheels, and taking as many precautions as possible, but it’s very difficult.”
Myles Thomas

Current regulations meant only free-range birds in restricted areas should be housed, if possible.  Defra needed to rethink its strategy, he said.

“As much as possible, producers need to be more and more biosecure, which is difficult in the free-range industry,” he added. “You can keep disinfecting boots and wheels, and taking as many precautions as possible, but it’s very difficult.

“We are having discussions with Defra and I think it understand the issues free-range producers are facing, but it doesn’t  react fast enough. The free-range flock should be inside until the government knows the situation.”

Mr Thomas, who took over from Roger Gent as chairman of the association, said the industry was in a strong position, but it faced several challenges – including fighting off regulations over beak trimming.

“We have been lobbying, but it’s a political decision and if we have a change in government next year we could have a challenge on our hands,” he said. “That’s why we need producers to write to their MPs – it’s not a done deal and there’s a chance the ban could be put in place.”

“The current egg price is very good and we have strong demand for our product,” he said. “On the back of that we are seeing massive expansion, which could cause problems. If producers are thinking of expanding, they need to speak to their processor and check there’s a genuine need for extra production.”