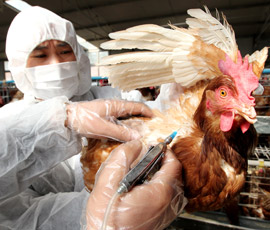 The first human-to-human transmission of the new H7N9 strain of avian influenza (AI) has been reported by researchers, following it emerging in April and causing the deaths of 133 people in China.

The British Medical Journal (BMJ) said researchers had investigated a family of people that had lived in close quarters, in which two died from the H7N9 strain.

They found a 60-year-old man had been infected with the virus at a local live bird market and subsequently developed a “severe and ultimately fatal respiratory disease”. His 32-year-old daughter had provided “prolonged bedside care” for her father, and later became fatally infected.

The AI strains in the two cases were almost genetically identical, and the woman was known not to have visited a live poultry market, pointing to a human-to-human infection.

But the BMJ said this case was not evidence of a trend, and shouldn’t be a cause for concern. It added there were 43 further close contacts around the man and his daughter who didn’t become infected. Occasional transmission between humans, it said, has been reported in other strains at low levels.

Some traits of the H7N9 did concern researchers, however. Particularly because H7N9 doesn’t cause obvious illness in birds, but will in humans, making it difficult to detect in flocks, the fact that mild infections during the outbreak were unlikely to have been reported, and a study showing its transmission through the air between ferrets in a lab.

The BMJ said: “Opportunities for H7N9 to adapt to humans or to re-assort through mixed influenza infections could be much greater for other bird flu viruses such as H5N1.”