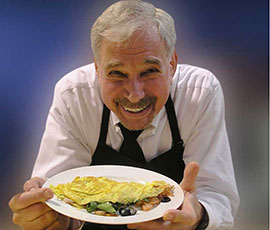 Public ignorance about eggs and cooking has been highlighted in a new survey from the British Egg Information Service, published to coincide with British Egg Week (30 September-4 October).

The survey shows that, while 95% of adults can cook at least one egg dish from scratch, only half of today’s children can.

Furthermore, more than half of the UK population has to refer to a recipe before boiling an egg, while more than a quarter of children think that they are cooking when they are making a sandwich.

And while most adults questioned still recall the catch-phrase “Go to work on an egg”, when seven-to-nine year olds were asked to complete the phrase, the most popular answers were “aeroplane” and “apple”.

“We are really worried about these findings,” said Andrew Joret from British Lion eggs. “Tony Hancock was right – everyone can benefit from going to work on an egg.

“But people need to know how to cook them and, if our children can’t cook, their diet is going to suffer as they get older.”

In response, a national campaign is being launched during British Egg Week to teach schoolchildren how to cook.

British Lion eggs have teamed up with the Kids’ Cookery School charity to launch the Eggspress Tour tour of schools, led by the world’s fastest omelette maker Howard Helmer (pictured above).

Other initiatives in British Egg Week include an hour-long “party” in partnership with blogging network @Britmums, in a social media drive to encourage engagement. Starting on Tuesday 2 October at 1.00pm, participants will be swapping recipe ideas, tips and chatting about eggs on Twitter using the hashtag #britisheggweek.

Find out more about British Egg week and see The Feathered Forager blog for more chicken and egg news.