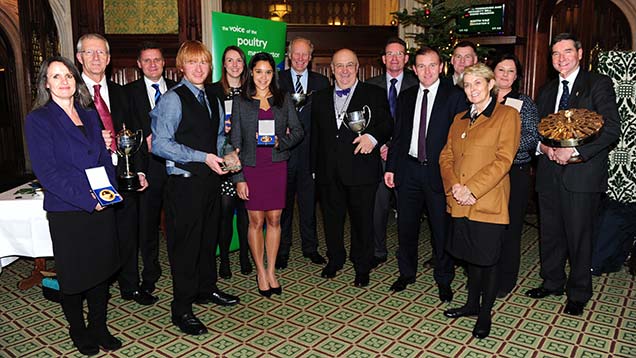 The British poultry industry has once again celebrated the talent, commitment and service of exceptional people that serve it in an awards ceremony held in the Houses of Parliament.

The awards, which are organised by the British Poultry Council and hosted by Anne McIntosh MP, range from offering young talent training opportunities to recognising decades of service.

Judges were impressed with his technical, organisational and personal contribution to the industry particularly in parts of Europe and the Middle East over the last 38 years. Lindsay retires this year.

Noel has spent over four decades working in the poultry industry, principally with Bernard Matthews, and has held a number of positions within AVEC, (the European body of poultry processors), the BPC and Red Tractor.

The Franklins were recognised for their many years of work in poultry marketing, according to judges. They recently hosted the Annual Goose Walk at their farm in Bedfordshire. This involved welcoming over 100 people from the industry, as well as local businesses and colleges, to come and talk about the current and forthcoming marketing conditions.

Alan now has 24 years’ experience in the poultry industry. From the importation of grandparent day-olds, through to producing day-old broilers, Alan oversees operations, liaising with Moy Park’s growers and hatcheries in the UK. Alan is also responsible for the sale of parent stock to Europe and broiler hatching eggs to customers in the UK and the Middle East.

Tracey won the award due to her collaboration with industry, NGO’s, and government for over 20 years. The judging panel was particularly impressed with her work on the welfare, behaviour and bathing water provision for ducks.