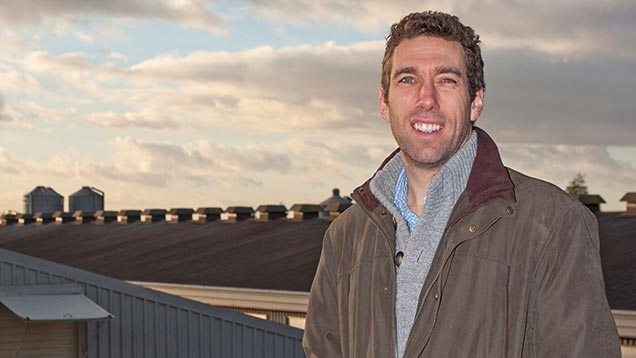 The Hay Farms broiler and turkey business is one of the best known in the UK poultry sector. But what is the secret of its success? Philip Clarke reports.

Running a successful poultry business is all about attention to detail and fast reaction times – noticing when things are off target and responding to them straight away.

That is the ethos of Ben Hay, who together with his brother Jonty and father Stephen, produces 25 million chickens a year from 12 broiler farms in England, plus another 400,000 turkeys for Faccenda from five units in Wales.

“It’s the small things that matter,” he says. “It’s also crucial to respond today, not tomorrow, or you’ll get left behind. And its important to be a stockman. People forget how to use their eyes, ears and nose.”

See also: Contract broiler farming could be a model for success

This is especially important at the start of a new crop.

“The new crop starts the day your last bird leaves, with washing and disinfecting,” says Mr Hay. “We try and use the retained heat, so as soon as the muck has come out, we shut the doors.

“There has been much more uptake of preheating since we got biomass, due to the lower cost. We target a temperature of 28-30C on the paper, and an air temp of 32-33C.”

Standard practice when the lorries arrive with new chicks is to disinfect the yard, leaving a pool of disinfectant through which trolleys and staff have to pass before entering the house.

“We put all our top-up bales in the shed, before the birds come in. Originally this was done to reduce the avian influenza risk, but it’s since led to better performance, as we are more inclined to use it. A little and often works best – today, not tomorrow.

“We put 12 rows of paper on the floor with feed, at 100g/chick. Other shavings have paper laid on too, as we’re trying to limit the choice of what the chick can feed on. We’re trialling fencing birds in as well for the first 24 hours, to keep them close to the feed and water.

Drinker cups are lowered to the floor for the first five or 10 minutes after tipping, so the chicks can get the nipples working. “As soon as they have done that, we lift them up, 5mm above eye level, so that they are just reaching for the water, but not stretching. It is also important to walk the shed, to get the chicks moving away from their huddles.”

Once up and running, Hay Farms’ broiler managers are given four target areas  to concentrate on:

“The critical thing is for it to be even, especially at bird height. We use biomass blown air, with a lot of circulation fans to minimise the variation.”

Floor temperature is key at chick start, but wall temperature is important too, says Mr Hay. “This is often overlooked. The wall is the coldest part of the house and is the greatest conductor of damp and cold air.”

Having even temperature means the migration of the birds is even, leading to less pressure on the feeders and drinkers.

Newly arrived chicks should only have to reach, not stretch, for water.

Top-up bales are placed in shed before chicks arrive, to bolster biosecurity.

Wood shavings are covered with paper to stop chicks trying to eat them.

Disinfectant is spread to minimise the disease risk. It is cleared up after use.

Hay Farms has always focused on terminal water hygiene, but during the past six years has stepped up “during cycle” treatments.

“There are a lot of products out there, so find the one that suits your farm. The implementation of those products is much more important than the product itself. We monitor on a weekly basis, sometimes daily. An ORP of over 700 is our target, with free chlorine of 1-3ppm. And we target a TVC of below 100 at end of crop.”

Availability of water is also important. “We want 80ml/min, especially on our roaster programme where there is high demand at the end.

“We used to have five rows of drinkers, with 20 nipples a bay. We’re now trialling six rows with 16.  Insufficient nipple access leads to stress and lack of performance.”

“We run the feed every two hours – it’s pretty much ad lib. While the feed never really runs out, it’s always important to get that noise, to stimulate the birds to feed.”

Pellet quality is always monitored, as is daily intake. “We graph everything in the control room – grammes per day and even the time the auger runs. I reckon feed will tell you 24 hours before any water drop if there is a health problem. It’s a real farm management tool.”

As with water, the aim with air is to keep it even – something that having draught-proof sheds facilitates. “We smoke test regularly, though not every crop as things can get samey. Seasonal smoke tests are very beneficial as air flow does change with different outside temperatures.”

Mr Hay also believes that, over the past two or three years, the minimum vent demands of chicks from days zero to 10 has greatly increased. Humidity needs to be below 70%, but with biomass heating that has become much easier to achieve. And carbon dioxide should be less than 2,500ppm.

“Vaccination days are expensive, so we ask our staff to concentrate on that one task. We don’t ask them to go and cull hard that day. We do a lot of training, and monitoring using blue tongue scoring – it’s all about record keeping.”

“The pressure is getting on, the feed is changing, the stocking is getting tighter. We have to watch staff morale. At this stage there is usually a lot of bedding going on, they’ve been in for 21 days, they are getting a bit bored of it, so we need to try and stimulate them. If we manage the 20s right and get sustained growth, then generally the 30s will be fine.”

“Again, attention to detail is important. We must minimise dropping the temperatures, and we must watch the catchers throughout. Also, don’t put your drinkers up when the lorry arrives – wait until the catchers go into the shed. Make sure you thin the whole shed, not just part of it, and check that the birds migrate back evenly afterwards.”

Many of the sheds operated by Hays Farms are refurbished Jack Eastwood sites, bought in the 1990s and brought up to scratch to help the business expand in line with poultry consumption.

“They were structurally sound, though they had earth floors and no money had been spent on maintenance. So a total refurb would be concrete throughout, electrics put in and ventilation installed.

“We also used spray foam to insulate the houses, which added to their strength and, more important, gave them tightness for ventilation. Finally we installed the heaters, feeders and drinkers.”

But the emphasis now is on new builds, which are built and flat packed at the company’s headquarters in Ross-on-Wye, then erected by contract builders.

“The decision was made to go timber. It is significantly cheaper and we like to keep the sheds squat. I know you can do that with steel, but lowering the shed with steel is expensive.”

The sheds are set up with roller doors. “They seal extremely well, are similar money to a composite panel door and they are generally out of the way, so they don’t get hit.” The turkey sheds have electric motors on the doors to making bedding up – a thrice-weekly task – easier to manage.

The sheds also incorporate a dust trap at the end, which forces the air coming out of the shed down under an overhang before rising up again to enter the atmosphere. “All we’re really doing is slowing the air down, so the particles drop out.

“It means an extra 20ft of dead space at the end of each shed, and I know some people will say that is 20ft that should be growing birds. But I believe that in the next 10 or 15 years there will be new legislation that will clamp down on dust pollution from poultry sheds.”

Concrete floors are now poured to provide a sideways slope. “In the 1990s and early 2000s we used to do it end-to-end to make it easier for the washers. We have changed as side to side is better for the birds. It is much better to have sheds more level to optimise drinker control.”

The sheds have an approximate cross section of 55sq m, which is combined with 55sq m of summer air inlet down the side walls. The sheds typically have 60-66ft span widths, with four feed pan rows and five drinker rows, and windows.