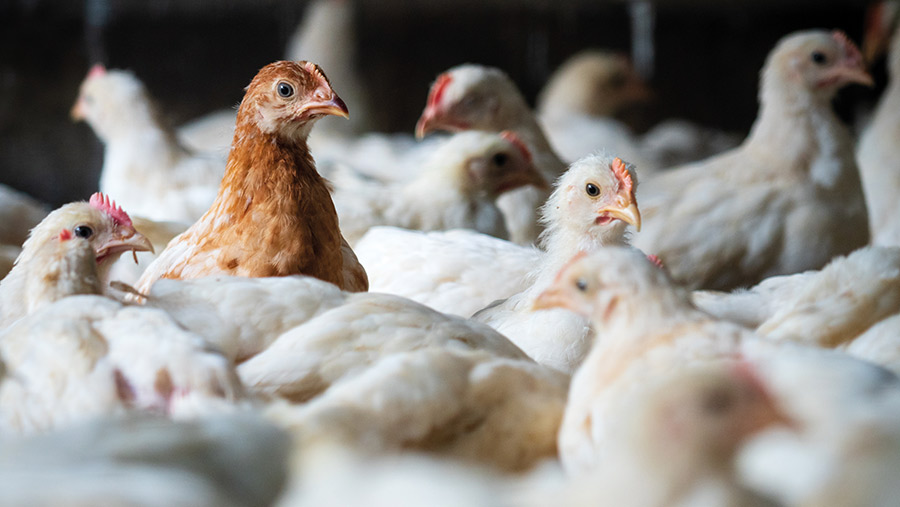 Carcass rejects reflect directly on returns and indicate there could be a problem somewhere in the process, says British Poultry Council chief executive Richard Griffiths.

It’s important to identify issues before they turn into rejects. “The aim is to pick up problems when they’re small and make improvements before they worsen, because rejects will often reflect how well the flock has grown.”

The key is to have good preparation and consistent practice, says Mr Griffiths. “Start at day one to ensure the chicks are healthy and have the best opportunity to grow well within the environment in which they are housed.”

Identifying the problems early is, therefore, key says Sara Perez-Palacios, director at Poultry Health Services. She explains the most common reasons for rejections.

Ascites is an increase of fluid in the abdomen, leading to total rejection of the carcass and offal. It is one of the most difficult things to control because it is very unpredictable and the farmer may not see anything on farm.

Historically ascites has been linked to poorly ventilated sheds and a lack of oxygen; something that biomass boilers has helped address – but it’s still something to watch out for.

Also known as watery belly, ascites can be attributed to rapid growth or an infectious disease affecting the lungs.

The birds tend to be one or two days ahead of their usual growth curve. If they are growing too fast, the lungs and heart cannot develop quickly enough to oxygenate the blood and pump it to the body.

One of the solutions is to control the bird’s growth. Using a “holding” diet earlier in life can slow the growth; it is low in protein, so the birds eat the same but don’t put on as much weight. It only needs to be used for a few days.

Although being ahead of target growth can be a good thing financially, it may not be good in terms of rejects. So control the birds’ weights and respiratory diseases (mainly infectious bronchitis, avian rhinotracheitis, ornithobacterium rhinotracheale) as well as the air flow in the sheds. 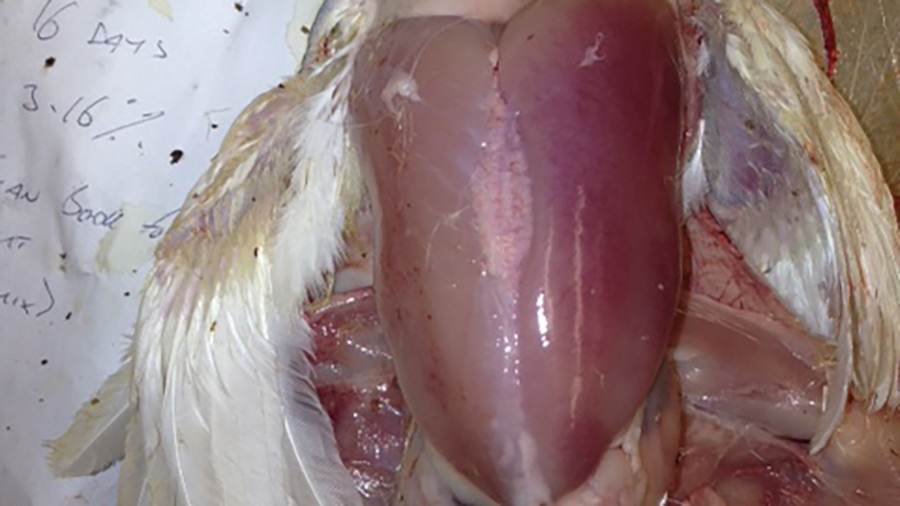 This is when the flesh of the bird is a dark red, instead of the usual beige, leading to total rejection.

It can be a sign of an infection and fever or dehydration, so needs investigating with the farm vet.

This is when the breast of the chicken turns very hard, and results in total rejection of the carcass. If sold for eating it would be very chewy, so it is not fit for human consumption.

Wooden breast is normally related to fast-growing birds, however the exact causes are unknown and it happens only very occasionally.

Inflammation of the skin (dermatitis) with accumulation of pus under it (cellulitis) leads to total carcass rejection if large areas are affected. Normally the abdomen, thighs and around the cloaca are most affected.

Causes are varied, but a common cause is a lack of feed or water due to an electrical failure or a problem with the water supply. The birds will scratch each other to access the feeders or drinkers, then the scratches become infected.

Another issue is very wet litter. If the birds are lying in dirty, wet litter, small scratches in the skin will likely become infected.

Keeping the litter dry – as well as good leg health – helps to prevent skin infections as the birds will be up and about, moving more. 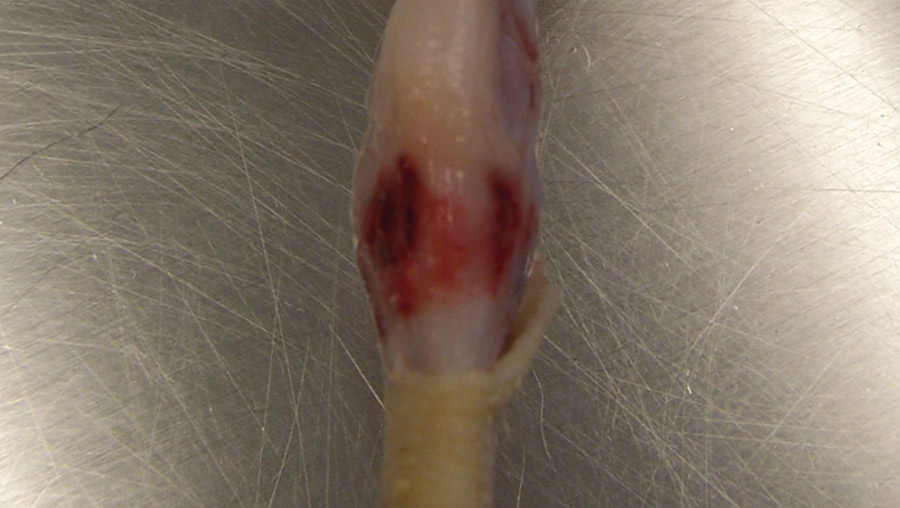 Bruising and fractures are normally linked to problems during catching and downloading of the birds into the factory. This leads to partial or total rejection, depending on how extensive it is.

Such cases will need to be investigated as they are a welfare issue. From the location of the fractures and the colour of the bruises, it’s possible to estimate when they occurred– whether just before slaughter or at catching.

A common disease, which can be present year-round, leading to total or partial rejection. Hot, humid conditions can cause stress and lack of oxygen, particularly if the birds are about to be depleted and stocking densities are high.

All broilers are vaccinated for infectious bronchitis, which is the most common respiratory disease. However, other infections such as avian rhinotracheitis, mycoplasmosis or Ornithobacterium rhinotracheale may cause clinical symptoms or lead to secondary bacterial infections that result in pericarditis or perihepatitis. It is advisable to involve a vet to implement a vaccination programme.

Pericarditis is inflammation of the heart; in chronic cases the whole carcass is rejected because it can be caused by salmonella.

Perihepatitis is an inflammation of the liver, normally caused by bacterial infections such as E. coli. If only the liver is affected, the viscera are rejected but the carcass is passed.

Rejects due to pericarditis and/or perihepatitis need investigating by a vet. Immunosuppressive diseases such as Gumboro disease can lead to secondary bacterial infections (E coli, staphylococcus, enterococcus) which cause lesions in the viscera, resulting in total or partial rejection of the carcass. 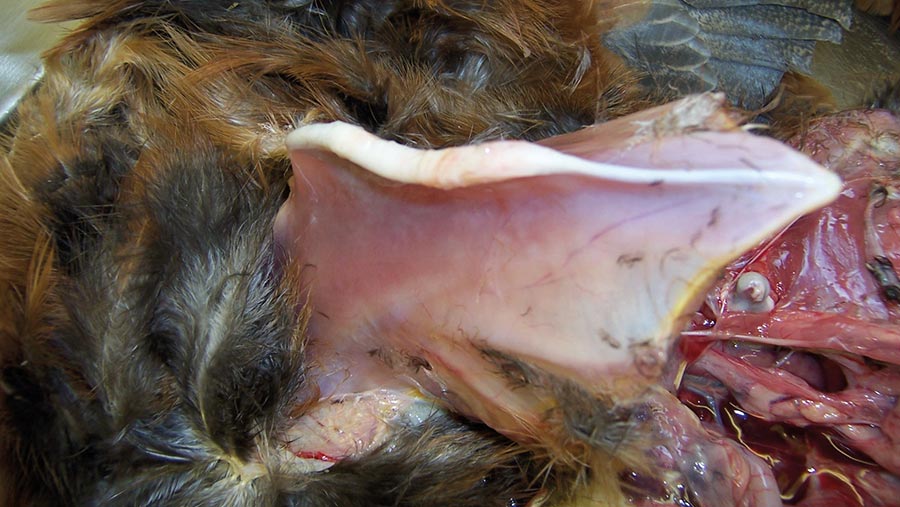 This happens when the birds have lost muscle and fat – emaciated birds will be rejected. There are always a small number of that have chronic conditions and don’t develop properly, these should be culled on farm on welfare grounds. However, a high percentage of affected birds could indicate a chronic infection in the flock.

Causes of emaciation include bacterial infections such as collibacillosis, sub-optimal feed quality (or feeding patterns) or tumours caused by Marek’s disease. Once the cause has been determined, a prophylactic plan is required including thorough cleaning and disinfection at turnaround and an updated vaccination plan. 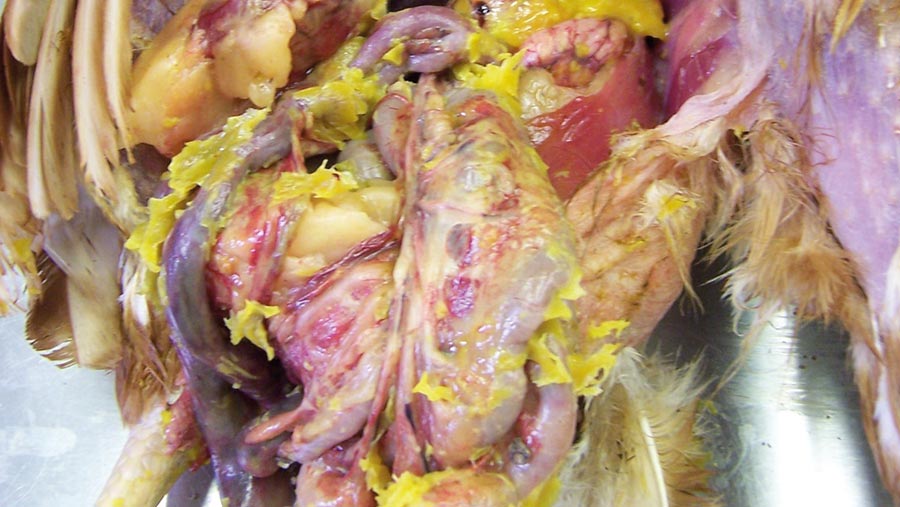 Salpingitis is an inflammation of the fallopian tubes (part of the oviduct). Commercial broilers are sexually immature at slaughter so this condition is only seen in spent hen abattoirs.

The fallopian tubes may be inflamed or ruptured, leading to peritonitis. Peritonitis can also be caused by an egg yolk entering the abdomen instead of the oviduct.

The yolk gets infected, leading to septicaemia and the whole carcass is rejected.

The level of these conditions increases as hens age, but reducing stress by providing a good environment and preventing disease will help.

Some rejections at processing – such as machine damage, over-scalding and contamination – are out of the farmer’s control.

The extent of the machine damage and contamination determines whether the carcass is totally or partially rejected.

The objective of inspections in the processing plant is to protect public health and identify conditions that may indicate poor welfare on farm.

By being proactive and implementing a good health and welfare programme, most of these rejections can be prevented or reduced.

One producer who has significantly reduced his rejection rates is Charles Bourns, who farms near Charfield, south Gloucestershire. “We used to get up to 3% and now we have dropped below 1%,” he explains.

His 3% rejection rate did have a big impact on finances. “We were producing a 2.5kg bird and selling 60,000 birds; by dropping the rejects by two percentage points, that’s an extra £2,000-£3,000 for every crop. It made a huge difference and was just an unnecessary waste,” he says.

Mr Bourns was having issues with rejections caused by disease, so he engaged St David’s Poultry vets and the agricultural manager from Hook2Sisters to help identify the problems.

In Mr Bourns’ case, it wasn’t a massive overhaul of the system, but a small change that made a big impact. “It’s having an eye for detail and spending that extra time – if I hadn’t done it we wouldn’t be making much of a profit,” he says.