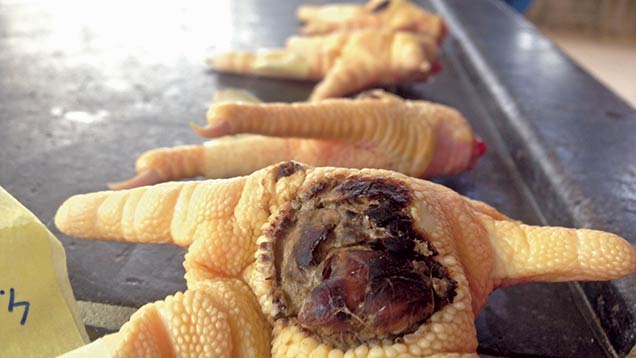 Optimising the shed environment is critical to containing pododermatitis, as Philip Clarke reports.

Reducing levels of pododermatitis in broiler flocks is all about avoiding the chemical reaction that causes it in the first place, namely the interaction between uric acid in faeces and water.

According to poultry vet Richard Jackson of the St David’s Poultry Team, there are three broad areas for farmers to focus on – the shed environment, bird nutrition and gut health, with the emphasis being very much on the first of these.

When it comes to optimising conditions inside the shed, drinker management is crucial, he says. “It goes without saying that if we get any drinkers that are leaking, they need to be repaired or replaced to cut the water going on to the floor.

1 – Substantial discoloration, no damage to toes or skin, covers less than 50% of pad area

2 – Over 50% of pad area affected, damage to skin and/or toes, deep lesions

“We also have to watch for flow rates, as the more water you put through the system, the more will end up on the litter and the greater the chances of getting podo.”

But it is also important to ensure the birds get enough to drink, so broiler growers should invest in flow meters, to measure how much water is flowing through the nipple at regular intervals. “Don’t take it for granted that because you set your drinker lines up correctly, it will remain that way.”

Drinker height is also key, to minimise spillage. “It can be difficult if you get an uneven flock, as you have to keep the drinkers a bit lower for the smaller birds.”

Mr Jackson also recommends the use of data loggers, to keep an accurate record of humidity levels.

Getting the ventilation rate right is also important, to remove as much ammonia as possible. “For farmers that have had issues with podo, it’s always worth getting in a ventilation consultant to make sure that there has been no creeping in calibration of your systems,” says Mr Jackson.

Litter choice can also have an impact. Research has shown that wood shavings can absorb 50% more moisture than the same amount of straw, and is the better option from a pododermatitis perspective.

With litter depth, it is not necessarily the case that “more is best”. Anything over 4cm will just create a bigger barrier between the air and the concrete floor, potentially increasing condensation.

Mr Jackson also recommends lifting heavy guage chick paper after four or five days, as leaving it there can create an artificial cap, and so prevent the litter underneath from absorbing residual moisture.

The aim should be for litter to be 85-90% dry matter at the start, not to fall below 55% DM, even under the drinker lines, and without any crust.

From a nutritional point of view it is possible to try and reduce the level of uric acid that is a basic component in triggering pododermatitis.

“That might mean having less protein in the diet or more digestible protein. Or we can try and reduce the amount of water through lower levels of salt. And we can improve the skin integrity of the birds by adding zinc and botin.

“But we do have to remember the cost and availability of ingredients. For example, if we’re reducing protein intake levels, we may have an effect on bird growth rates.”

The link between gut health and pododermtitis is more circumstantial than causal.

“Most broilers, if they’re going to get digestive upsets, will get them around the three-week mark. But pododermatitis will have started already. Undoubtedly, poor gut health will make whatever podo is there already that bit worse, but it won’t have set the ball rolling.”

Problems of pododermatitis arise from the interaction between uric acid in faeces and water, which combine to form ammonia and CO2. Ventilation systems can remove some of the ammonia, but some will dissolve in the moisture and become an irritant to the footpad of the chicken.

The condition is important, both from a bird welfare perspective, and also because the Broiler Welfare Directive stipulates maximum acceptable levels. There is also a market consideration, as broiler feet are an important export product. And it can also affect bird performance.

There are no viruses or bacteria associated with pododermatitis, so there are no medicines to control the condition. Once established, it will be with the birds until depletion.