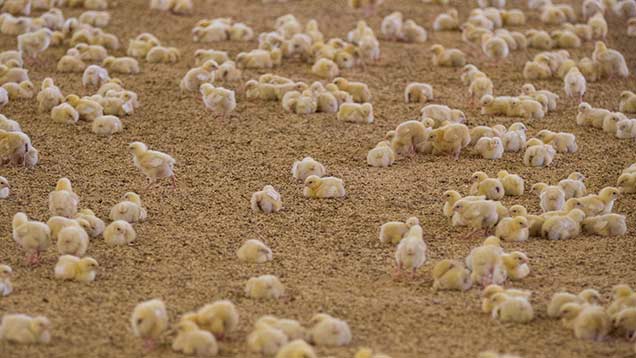 Does this crop turnaround scenario sound familiar?  Once poultry houses have been washed, disinfected and had new bedding, the LPG (liquid petroleum gas) heaters are turned on to pre-heat the house for 24 hours before the new crop is placed.

Within 12-24 hours of crop placement the gas heaters begin to fail and revert to lock-out. When the heater is reset, it works for a while before again reverting to lock-out. Maintaining temperature in the house becomes a problem.

The issue may affect all heaters in a house, or only a single heater and generally disappears after a further 12-48 hours.

See also: Read about the age and condition of the UK’s poultry housing

Until now, farm operators have seen this issue as a heater fault with various “remedies” being tried; reducing the gas pressure, linking out safety devices or removing air deflectors, none of which brings success. This is because the issue is almost certainly one of ventilation, not heater performance.

Over the past two years poultry farmers have increasingly examined costs, including the cost of LPG for heating. In an effort to reduce gas usage, various practices have been introduced: doors at the rear of the houses are sealed with polythene sheeting; or fresh air vents and fans are set at minimum or closed settings during the 24-hour pre-heat period.

These practices are preventing fresh air entering the house, to the detriment of both the heaters and the health of the farm workforce.

The number of farms reporting similar heater failures is rising, suggesting farmers are trying hard to prevent heat loss – but the risk is not worth the reward.

We used a carbon monoxide tester to sample the atmosphere and readings of up to 171 parts per million (ppm) were recorded. It is reasonable to assume that after 12-24 hours the readings would be significantly higher. The fresh air vents and extractor fans were set at zero setting.

Employees working in poultry sheds sometimes complain of stinging eyes and mild headaches – these symptoms may indicate mild carbon monoxide poisoning and may be detrimental to long-term health. Any such occurrence ought to be investigated.

LPG heaters require copious volumes of fresh air to enable correct combustion. A restriction on the availability of fresh air will result in the house atmosphere becoming increasingly contaminated by carbon monoxide, causing the heater flame to become unstable and leading to eventual heater failure. This is not the fault of the heater, it is a ventilation fault. Either way, it is a highly dangerous situation.

Fresh air requirements for LPG are clearly stated in manufacturer’s guidelines and should be closely followed.

The Hired Hand heater, for example, requires 1,348cu m/hour per heater of fresh air, whether this is delivered by means of mechanical ventilation or separate, fixed ventilation. For a typical house with four such heaters, the fresh air requirement will therefore be 5,392 cu m/hour.

If the house ventilation control system is set for anything lower, then carbon monoxide build-up is likely.

Not ventilating adequately is dangerous, and may result in lethal concentrations of carbon monoxide within the house, leading to possible fatal poisoning of a farmworker.