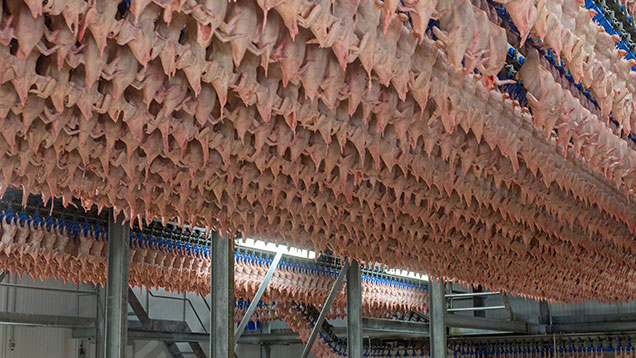 Poultrymeat integrator Cargill Meats Europe is to install a new SonoSteam unit at its Hereford processing plant, as part of its continuing plan to reduce campylobacter.

The kit, developed by Force Technology in Denmark, uses a combination of steam and ultrasound to kill micro-organisms on the skin and internal cavities of chicken.

The new technology is expected to be operational at the Hereford site by end of 2015.

Chris Hall, fresh chicken director for Cargill, said the company had already done much to cut campylobacter levels on its farms and in primary processing.

On farm, actions have included tightening up biosecurity, investigating the effects of thinning, strengthening catching practices, routine on-farm testing and researching the influence of parent stock.

And in-factory, the company has so far installed new rinsing stations, improved chicken neck skin trimming and spent £11m on a new air-chilling facility (pictured above).

Since August, ultraviolet light has been introduced to decontaminate outer packaging.

“Analysing our results in the first half of this year, we have seen an improvement year-on year of approximately 38%,” said Mr Hall.

“However there is still more to do.

“We have been following the development of new technologies very closely and made the commitment that we would adopt one as soon as it proved effective.

“We have been following the development of new technologies very closely and made the commitment that we would adopt one as soon as it proved effective”
Chris Hall, Cargill Meats Europe

“We are very excited to be taking these next steps with Force Technology.”

SonoSteam technology has already been tested and installed by poultrymeat processor Faccenda at Brackley, and is making a significant contribution to cutting campylobacter levels.

“This technology has proved itself capable of working day in and day out in a production environment and has been proven effective at reducing campylobacter in an environmentally friendly way without chemicals, only water and a modest amount of energy,” said Force Technology vice-president, Niels Kreb.

In its recent survey of campylobacter on retail chicken, conducted from February 2014 to March 2015, birds sourced from Cargill were shown to have an above-average level of contamination, with 23.3% in the highest category.