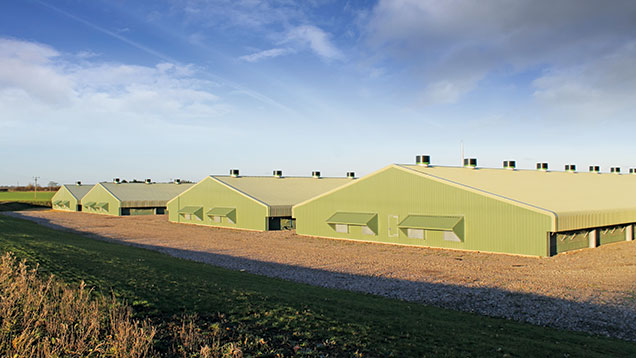 For arable farmers, the concept of contract farming is a well-established one. Landowners who want to retain ownership of their assets without actually farming can have someone else manage them on a shared margin basis.

But in poultry farming circles, this type of arrangement is relatively new – though it seems to be working just as effectively.

“My background before becoming a broiler grower was in arable farming, so I’d seen how well contract farming can work, with companies such as Velcourt and Sentry Farming taking a lead,” says David Speller of the Applied Poultry Group. “I could see no reason why it would not work in the poultry sector.”

To some extent, the development of a contract growing arrangement was a natural progression from Mr Speller’s own involvement as a broiler grower.

“We have the home farm in the Peak District where we produce 180,000 birds at a time for Moy Park. But we wanted to expand. So I ended up renting a Moy Park farm near Uttoxeter, producing another 115,000 broilers for them.

“My under-floor heating business Geotek was also growing and we were employing more and more people. To maximise staff use, I started getting into contract services, doing things like chick tipping, shed cleaning and feed haulage.”

The next step was that an arable farmer near Lichfield, Staffordshire, approached Mr Speller’s Applied Group, wanting to get into poultry production.

“Initially we were called in to design the farm, but this soon evolved so that we drew up the whole plan, including a contract management agreement. We costed the whole operation, worked out budgets and cashflows, helped put in for planning permission, managed the tendering process, oversaw construction and then ran the farm on behalf of the owner.”

The contract for the feed, chicks and birds is actually between the owner and Moy Park. “But we oversee all operations, manage the staff and monitor the sheds to achieve maximum performance,” Mr Speller explains. “The owner gets a steady return on investment, we charge a fixed management fee, and we share any of the residual profit.

“Under contract farming, the owner has the final say on things such as which building to go for and which equipment to use, though obviously we advise them. And the Applied Group provides most of the services like chick tipping, cleaning and feed deliveries, charged at industry rates.”

The economics of broiler growing looks good in the long term and there has been a significant increase in the number of arable farmers who are now looking to diversify into poultry farming in order to secure a more steady income flow and return on capital.

“With arable land costing £12,000/acre and the wheat price at not much more than £100/t, the margins from broiler production are better.”

The life expectancy of modern poultry sheds is also impressive. “While high rates of depreciation can be built into the accounts, in reality, at the end of 20 years, these sheds are not worth much less than they cost now.”

But, whatever the economics, Mr Speller says it has to be market led. “We won’t advise any of our clients to invest if there is not the market. It has to start with the customer. Our margins are actually very tight, so we won’t risk anything until the outlet is secured.”

Clients vary on how much involvement they want. “We have a formal meeting after each crop, and I always try and meet the owners when I’m on site. And while I manage the staff, the owner can employ them and pay the wages, or we can provide our own staff if preferred.

“It has to be set up so that, should either party ever decide to go their own way, the farm would still be able to function.

“We have our own area managers and also share a huge amount of information among our different farm managers, so each can see what the other managers are doing and what results they are getting. This helps raise standards overall, and saves them having to get on the phone all the time to check what to do.”

Mill Farm near Sleaford in Lincolnshire is one of the latest units to be taken on by Mr Speller on a contract farming basis.

The unit has just one megawatt biomass boiler, fuelled by woodchip. But each shed also has an LPG-fired water boiler which acts as back up if there are problems with the main biomass boiler.

Under-floor heating is used throughout, supplying about 50% of the heating requirement. “But we also have Multiheat water-fed radiators and fans suspended from the ceilings, as these react quicker if heating adjustments are required,” says Mr Speller.

Ventilation is based on side inlets and roof extraction, as there are houses near the site and planners and regulators believe this provides better odour control than tunnel ventilation.

All the sheds have low level windows, while artificial lighting is based on high frequency flourescent tubes, rather than LED systems. “LED is still too expensive for me. All my calculations suggest is has a six to seven year payback time, which is a long time to wait to see any gain. I want to see a five-year payback before going down that route.”

Feed bins are from Collinson, feed lines are from Roxell and the drinking system is from Lubing, with electric winches to take them up as required. “We weigh every 10kg of feed into each shed and monitor every litre of water consumed.”

“We’ve also thought about rainwater harvesting, but that would take a lot of investment. Also, mains water is not that expensive yet, relative to the cost and risk of getting water harvesting wrong.”

The shed environments are all controlled using a Fancom system, with touch screen controls. These are linked to Mr Speller’s head office at Eastmoor, Derbyshire where everything from temperature and humidity levels to feed and drink consumption are monitored. Graphs make it easier to spot trends.

“We do a lot of remote management. All the sheds have CCTV cameras, which can be fully rotated and zoom right in to check things like feed levels in the pans and drinker nipple heights. So while the on-site manager oversees the day-to-day, we keep a close eye on things and can adjust everything from head office.” Infra-red cameras also help monitor bird spread.

The farm is now into its eighth crop. The first three crops had no remote monitoring, as there was no internet connection to the site. The performance was somewhat below par. “But as soon as we went fully remote, EPEF jumped by 40 points,” says Mr Speller.

The birds are thinned at 33/34 days, with clearance at 36/37 days. This short time gap is because the sheds are cleared using one of Moy Park’s Apollo catching machines, and once in situ it makes sense to leave it there. Also, the birds are destined for the firm’s Anwick factory, which takes slightly lighter birds than Ashbourne. But having a relatively late thinning date means chicks are stocked a bit lighter, at 19.5 chicks/sq m, rather than up to 21 chicks/sq m.

In a high-tech industry, much of this is fairly standard stuff, says Mr Speller. “What is different is we are seeing large arable farmers wanting to get in on the act. They are in it for the long term and have the financial resource. Yes, they require a return on capital, but they also want the best.”