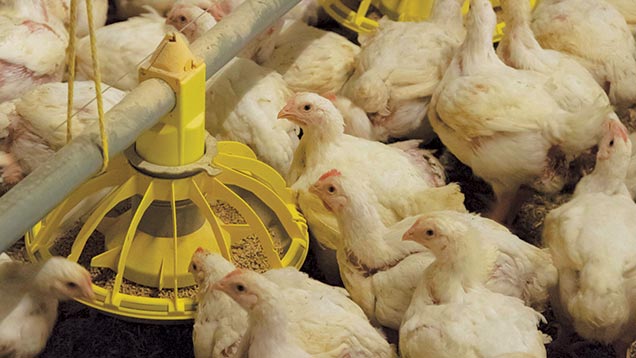 Non-governmental organisations have used consumer-facing campaigns to decry standard broiler production and so change the retail landscape for poultry in the Netherlands.

They have highlighted lameness, growth rates and antibiotic use through sophisticated multimedia campaigns and hammered home their message.

It has forced the retail market for poultry to split from wholesale production within the country.

“Whether or not it’s correct is not important,” Ben Dellaert, who heads up Dutch poultry board Avi Ned, told a poultry seminar at Eurotier. “In the past I’ve become very emotional about this sort of thing, but it is all within freedom of speech.”

Mr Dellaert chose to relate the changes from the perspective of a fictional neighbour to a poultry farm. “Although she lives in a rural area, she doesn’t know much about agriculture, and certainly nothing about broiler production.”

Mr Dallert said his neighbour would question him, knowing his job and having seen swathes of bad publicity surrounding the Dutch poultry industry. “’What kind of industry are you working for?” she would ask. “The pictures I’m seeing don’t look so lovely – I had the idea that animals were walking around freely in a large area, and that they have a happy life.”

The poor publicity was mainly the result of an NGO named Wakker Dier, which roughly translates to “the animal is awake”. Mr Dallaert said that, until about 10 years ago, the charity had only targeted primary production.

“That didn’t work as farmers will continue as long as there is a market. They decided to completely change strategy.”

Instead, the group decided to highlight the link between primary production and the finished product,  focusing on straightforward, short and shocking communication – and making sure it was widely disseminated.

Retailers realised they needed to do something about the poor publicity, said Mr Dellaert. They began to sit down with farming bodies and work out standards that would satisfy consumer concerns at a price point everyone could live with.

That proved difficult. The first round of suggestions was costed up, and the extra expense was deemed to be unacceptable. In the end, the group recommended to retailers that growth rates were restricted to 50g/day, stocking densities reduced by 10% to 38kg/sq m and minimum periods of uninterrupted darkness were maintained.

The industry also recommended further improvements relating to sustainability. “As your carbon footprint goes up, your feed conversion ratio will also go, there’s all kinds of things not so positive from an environmental point of view,” said Mr Dellaert.

As such, commitments to source soya more responsibly, reduce ammonia emissions and increase the amount of renewable energy use were also made.

The changes were put forward at the end of 2013 and two large retailers have adopted them enthusiastically.

One, from October this year, relaunched its fresh poultry offering, highlighting the higher welfare standards on packaging and through advertising. It was billed as a “small step for man, a big step for chicken-kind”.

It was also made clear that the changes would mean poultry came at a higher price – around €1/kg extra. “It is the first time I have seen a retailer say: ‘This is what you want, this is how much it will cost’,” said Mr Dellaert.

He concluded that the industry in the Netherlands had a bright future, and the wholesale poultry market – which accounts for 70% of production – was still able to export its competitive produce to the rest of Europe and third countries.

Economic worth of poultry sector

European poultrymeat’s value to the economy was laid out at EuroTier by Dutch economist Peter van Horne from Wageningen University.

The industry produces 12.9m tonnes of poultrymeat a year, contributing an estimated €39bn to the economy. It is also responsible for employing around 300,000 people.

Mr van Horne is the author of a number of studies that highlight the threat that free-trade negotiations could have on poultry production in Europe.

Across Europe, the cost of bringing poultrymeat to supermarket shelves is broadly similar, with the exception of a few eastern countries where it is cheaper, and some north western member states that have “gold plated” EU legislation.

Third countries, such as Brazil or Argentina, have a significantly lower cost of production, but a big expense is keeping up with additional legislation, said Mr van Horne.

The point in producing such reports is to highlight that, if multilateral or bilateral trade negotiations are successful in removing import tariffs for poultry, European companies and the contribution that they make to the economy could be placed under threat.