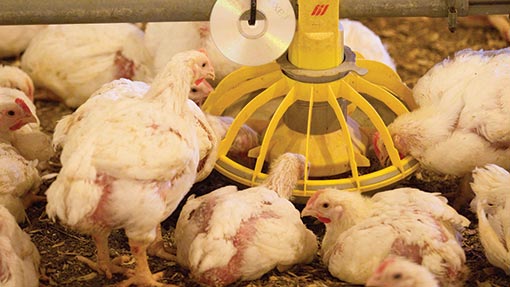 Just as a limiter will stop a car from reaching top speed, so in commercial poultry production there are “limiters” that can hold a broiler back.

One of those is the presence of beta-mannan fibres in feed raw materials such as vegetable proteins and cereals.

The problem with this fibre is that body defence systems detect it as being similar to galactomannans on the surface of pathogens or bacteria.

This means that, when the internal surveillance systems in the body identify beta-mannans, they react. During this reaction, the body expends energy – essentially putting a limiter on the energy generated by the feed.

The prompt for this reaction by the innate immune system is known as a PAMP – a pathogen associated molecular pattern. The reaction itself is referred to as a feed induced immune response (FIIR).

The innate immune system is the one the animal is born with, not the adaptive system which drives antibody production. As such, the body makes the same reaction with beta-mannans every time they are consumed.

It is clear that cereals are an essential component of poultry feed and have intrinsic nutrient value. It would, therefore, be very hard to eliminate beta-mannans completely and still provide poultry with an adequate, balanced diet.

Avoidance of soya bean meal isn’t a useful strategy either. For, while beta-mannans have been strongly associated with soya, it is clear that they are found in sunflower meals and rapeseed too. 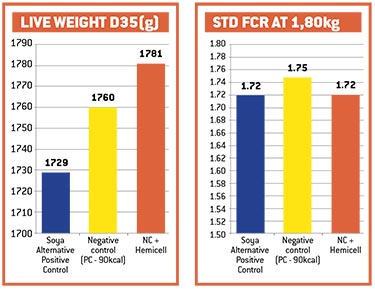 However, a new beta-mannanase enzyme, Hemicell from Elanco, has been developed that can be added to feed to break down the beta-mannans. As a result, it spares energy and lets birds grow, without the limitations imposed by provoking unnecessary immune responses.

Putting this into an economic context is, of course, vitally important and a recent independent French trial attempted to quantify the effects.

The trial involved 4,500 Ross 308 broilers – half male, half female – divided equally among 48 pens. It was set up to replicate commercial conditions and ran from November 2013 to January 2014.

This suggests that a lower energy diet incorporating Hemicell can perform just as well as a higher energy soya-based feed that has not been supplemented.

The trial was also used to ascertain the energy sparing effect of the enzyme by comparing a soya bean-based diet and a mixed protein-based diet, with and without the enzyme supplement.

The researchers also looked at the impact on intestinal integrity using a variety of parameters. This included evaluating how much aqueous content was present in the intestine and looking at lesion scores in relation to coccidiosis.

According to the company, the supplemented groups showed improved intestinal integrity, better uniformity and reduced mortality – of 4.5% versus 6.0% in the control groups, regardless of whether they were fed soya-based diets or mixed diets.

The French trial also demonstrated that beta-mannanase can be used alongside other commonly-used enzymes, such as xylanase and phytase, which are designed to break down nutrients and release energy.

“It will be reassuring for producers to note that additional multiple trials in a commercial environment involving around two million birds confirmed real and observable benefits,” says Elanco. “Feedback from the field also included improved litter scores, a reduction in litter eating and a lower incidence of pododermatitis. All of this is great news for producers looking to improve their competitive position.”

For more than half a century, Elanco has been supplying products to help improve animal health and protein production in more than 75 countries around the world. The company is committed to research, development and implementation that benefits animals, consumers, the environment and farmers.  For further information call 01256 353 131 or email elancouk@lilly.com