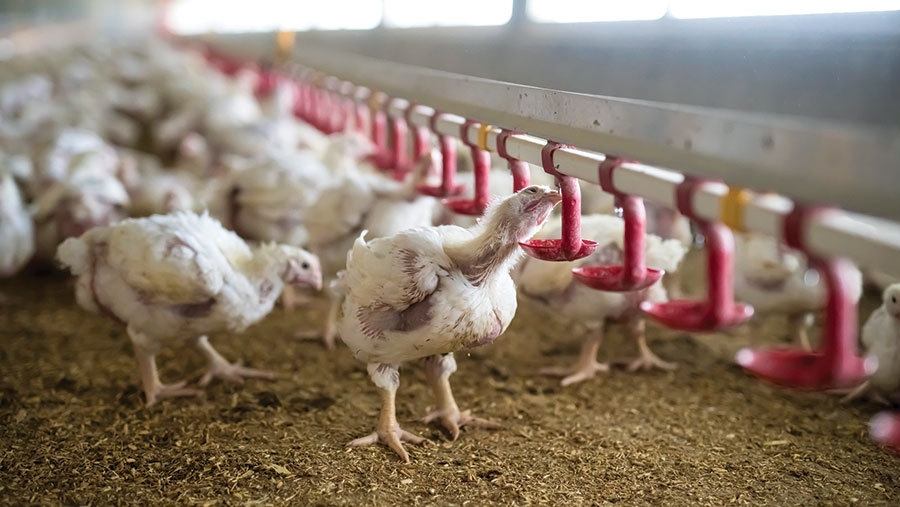 Research, expert advice and attention to detail have helped one first-time broiler grower achieve some of the highest performance figures in the wholesale sector.

David Hewitson’s journey into broiler production started when he returned to his family’s Hauxley Farm near Stockton-on-Tees in 2017 after serving in the Navy.

At the time, the farm already produced arable, pigs and sheep. But Mr Hewitson was interested in broiler production, which was enjoying a 10% year-on-year growth in demand.

See also: How to spot and treat infectious bronchitis in broilers

The positivity surrounding the sector, and low environmental impact, added to the attraction of broiler production, he says.

“I set out to get as much information as possible online then began to contact growers to get a solid idea of how to set up a successful unit,” Mr Hewitson says.

These were some of the most important people he spoke to during this phase. The practical advice and warts-and-all reviews helped build a realistic picture of the sector.

Farmer contacts also recommended who to talk to in the wider industry. Based on their advice Mr Hewitson began a round of discussions with broiler feed and processing companies to ensure there was sufficient capacity in the market.

As well as companies linked to broiler production, he quizzed advisers and consultants and secured assurances from potential buyers over demand for the stock produced.

Following advice that suggested a minimum of 100,000 birds in two sheds was needed to achieve a decent return on investment, the Hewitsons submitted plans for a four-shed, 220,000-bird unit to allow for future expansion.

The planning permission process went smoothly and cost about £28,000. But it still took 12 months to complete and the additional environmental reports required, pushed up costs to £65,000.

Good weather during the winter of 2018 meant the Morspan building was constructed, Collinsons equipment and a Fancom environmental system installed, within four months.

Connecting the electricity supply proved to be the biggest headache. “Instead of hooking us up and allowing us to use the planned, energy-efficient, ground-source, heat pumps, the installer struggled and eventually quit.”

“With hindsight, I should have looked harder at the company’s credentials, and I would advise anyone thinking of entering the sector to carry out a thorough check,” Mr Hewitson says.

The unit had to turn to emergency generators for power as the first flock was due to be placed. Gas heating was later installed as an interim solution while the work to connect up the ground-source heat pump continued. 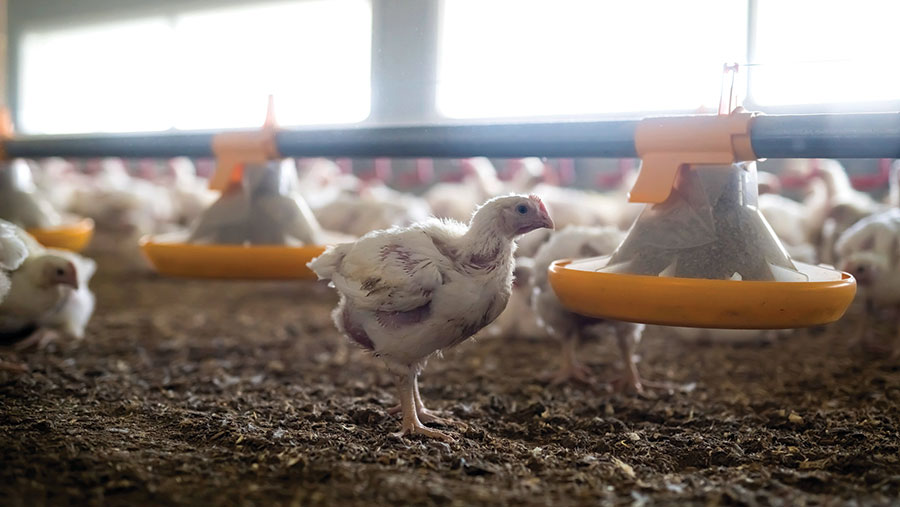 As the time approached for the arrival of the first crop, the amount of new information, checks and details were almost overwhelming, says Mr Hewitson.

One mistake during this initial phase could have caused a problem that held back the entire crop’s performance. For help, Mr Hewitson turned to feed and nutrition specialist ABN.

“As David says, the amount of new information can be overwhelming. It would be easy to miss or skip a vital point, so my role was to guide the start-up,” Mr Daniels says.

With the incoming crop approaching, one of the first tasks was to ensure that everything in the two new sheds was fully functioning and any potential glitches identified.

The two sheds were heated to 32C for two days before shavings were laid, and this temperature was maintained until after the chicks arrived.

This practice is needed because the newly laid concrete floor is cold and can chill the day-old birds. Performance would be hit from day one and never recovered.

Another key to getting performance from the outset was to prepare the water system at Hauxley Farm immediately before the birds arrived.

To ensure water intakes are adequate, birds need cold, fresh water available to them continuously from the very first minute of arrival.

However, water can lie in the system pipework while the shed is pre-heated and also warm-up, allowing microbial populations to develop.

The water system was flushed through until it ran cold before the birds came in. Checks were also carried out on water pressure regulators.

There must be sufficient pressure for a drop of water to hang on the drinker nipple. The glistening drop catches the light, and the day-old bird is instinctively attracted to it.

However, if pressure is too high the system will drip, and shavings beneath can get wet and harbour disease.

Immediately before stocking, additional feed was provided at floor level to encourage the birds to feed from the start.

Once the birds were in, it was a case of careful monitoring and frequent, subtle adjustments to the system to optimise performance.

During the first crop, Mr Daniels walked the sheds alongside Mr Hewitson several times a week to help him get used to the process and to identify any irregularities.

The Hewitsons were advised to walk each shed three times a day for about 40 minutes and focus on the birds’ behaviour, both individually and as a flock.

It’s important to note how birds are feeding, drinking and their behaviour. For example, the flock can appear flighty, which can indicate the lighting regime needs adjusting.

From days one to 10, light levels need to be high to stimulate food and water intakes.

But levels need to be adjusted downwards as the birds grow, to keep them calm and improve growth rates.

Feed and drinker equipment was regularly checked during the shed walks.

The height of drinker nipples was fine-tuned when necessary, sometimes by as little as half an inch, to keep the line just above the birds’ eyelines.

This maintains water intakes as the bird lifts its head to peck at the hanging droplet and the water then flows naturally back into its beak.

Set too low, and the water will drop away from the bird to the floor. If birds are unable to drink efficiently, feed intake is lower and ultimately weights drop.

Likewise, minute adjustments to the feeder heights are needed to allow the birds optimum access to the feed without wastage or competition.

As well as the visual checks, feed and water intake levels were collected and monitored through the system equipment. These were analysed at least once a day to spot any irregular upward or downward trends in intakes that might suggest disease or a system problem.

The task is made easier with ABN’s InFocus app, which has been used to collect and collate data.

The data can be sent straight from a phone to the cloud allowing both Mr Hewitson and Mr Daniels to access and analyse the results using graphs which highlight any discrepancies in performance or fluctuations in feed, water or the environment.

Mr Hewitson then made adjustments where needed to maintain optimum bird performance in both sheds.

It is important not to treat individual sheds as one unit. Each one will have a number of slight differences that can be overlooked but collectively add up.

The environments can vary considerably, so need managing differently to keep growth rates up.

At the end of the first crop, data was reviewed under the Total Farm Performance package.

The shed was totally cleared on day 49. Mortality in the first flock was 5%.

Feed conversion ratios for the first crop were just 1.68:1 placing the Hewitson’s flock at the top of ABN’s performance chart across its monitored wholesale producers that year.

The first crop also saw growth rates peak close to 120% of the breed guide between 20-25 days.

“Despite the high peak in growth compared to the breed standard, we lost some performance in the early days,” Mr Daniels notes.

From day one, growth rates were 79% of the breed standard and did not achieve a 100% figure until day six.

“For the second flock, we decided to put more feed on the ground as the new chicks came in. The move was successful and saw the flock hit 100% of the breed standard by day three.

“We also made a number of changes to the lighting intensity at different times/around week three of the growing period to encourage water consumption, and hence feed intakes, in the first few weeks.

“After which, further lighting changes were made to slow bird growth down later on – the aim was to reduce mortality by another 1%,” Mr Daniels says.

The plan worked, and the growth curve peaked more gradually to 110% between 25 and 30 days.

A knock-on benefit of the more uniform growth was a 1% reduction in mortality over the lifetime of the flock.

The combined better growth and lower mortality saw the EPEF rise to 417.

How the European Production Efficiency Factor is calculated

The efficiency factor allows broiler results from different flocks and different regions to be compared.