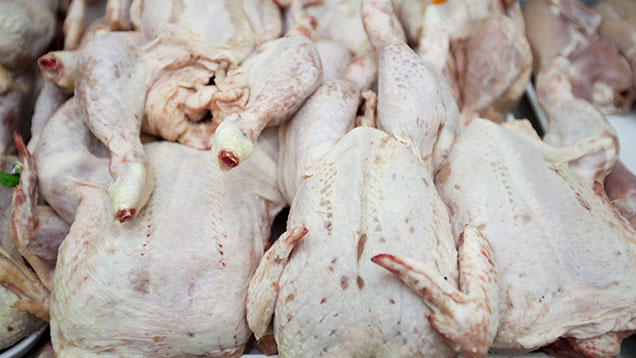 The Food Standards Agency (FSA) has published its latest set of campylobacter testing on whole birds, showing the poultry industry is not yet hitting its targets for reduction.

Today (26 February) it released cumulative figures for the first three quarters of testing, with more than 3,000 whole birds bought from stores and assessed.

The FSA also released its third quarter results in isolation, which found 78% of birds contaminated, compared with 81% in Q2.

The measures are a farmer bonus for clear sheds, a ban on thinning, blast surface chilling at the processor, clear labelling and double bagging.

Since mid-November, the supermarket says there has been a “step change” in campylobacter rates. Birds with the highest level of campylobacter have dropped from 11% to 5% over the three months, and February recorded just 3% contaminated (based on independent testing of 336 M&S chickens).

Chicken found to have the highest levels of contamination remained static, at 20%.

Testing of outer packaging found 7% contaminated, with three of the 3,052 samples taken having the highest levels of campylobacter.

The FSA has targeted industry to bring the level of highest contamination down to below 10% of birds before the end of 2015. As with the previous release, Asda is named as the retailer with the highest percentage of contamination, and Tesco the lowest (see table, below).

But the British Poultry Council (BPC) said the sampling period fell before major interventions in the supply chain were introduced.

A BPC spokesperson said: “The figures, covering February to November 2014, go up to a point where significant interventions began being trialled in slaughterhouses, following years of research into this complex bacterium.”

Steve Wearne, FSA director of policy, said: “We now know it is possible to make positive inroads in the reduction of campylobacter.

“Figures released today by M&S show that its intervention plan has resulted in fewer contaminated chickens on sale in its stores.

“If one retailer can achieve this campylobacter reduction through systematic interventions then others can, and should.

“Our survey is putting pressure on retailers to work with poultry processors to do more to tackle campylobacter.

“We want the industry to reduce the number of the most highly contaminated chickens as we know this will have the greatest impact on public health.

“Campylobacter is killed by thorough cooking, but it should not be left to consumers to manage the risk.”

How the retailers are doing – nine months cumulative results