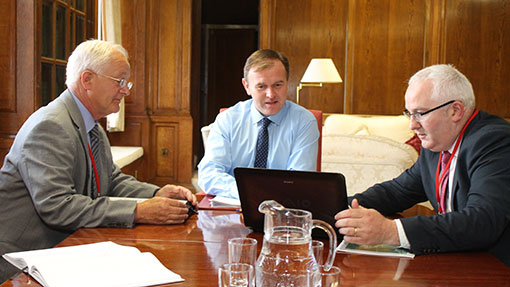 “A great success story of Britain and Ireland working together in Brussels,” is how Declan O’Connor, chief executive of biomass company BHSL, has described the legalisation allowing poultry litter burning on farms.

Meeting Defra farming minister George Eustice on the day the new regulations came into force (15 July), he said the time had come for farmers to stop thinking of chicken manure as waste and start thinking of it as fuel.

The arguments in its favour were “economically compelling”, he told the minister, as well as sustainable.

But there was still an issue with getting the resultant ash reclassified, so it too could be used on farm without having to go through expensive waste controls.

“Ash is still in a waste ‘cubbyhole’ and we need to get it out,” said Norfolk broiler producer and NFU member Nigel Joice, who has the first litter burning operation up and running. He explained that it was costing him £700 a go to get a deployment licence to spread the ash on up to 50ha of arable land.

One way of addressing the problem would be via a review of the fertiliser regulations, currently under way in Brussels. But that would take another two years and both the NFU and BHSL urged Mr Eustice to press for a faster solution.

Mr Joice also explained how the use of poultry litter was benefiting his business, costing just £12/t as a fuel source, compared with £100/t for woodchip. His feed conversion ratio had also improved by 10 points, saving about 2-3p/kg on feed costs.

Combined with Renewable Heat Incentive payments, his total investment of £1.8m had an expected payback time of just four years, in large part due to the better welfare and performance of his birds.

Meanwhile, Mr O’Connor revealed that BHSL is already in discussions with a large UK integrator with a view to setting up litter burning plants on at least another 10 farms in the next year.

And the company has hosted visits from French, German, Polish and Dutch integrators, all keen to follow the UK/Irish example of harnessing poultry litter to generate heat and power.