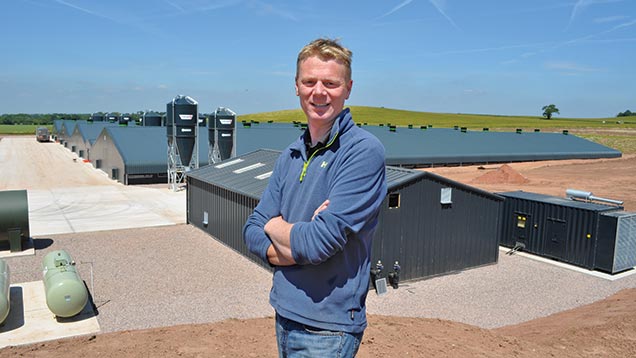 Harvesting natural heat from soil, surface water or underground aquifers is costly in relation to other green technologies. But it offers almost unparalleled levels of efficiency, as Simon Wragg reports.

As part of a £3.5m move into broiler production, he has had a ground source heat pump (GSHP) system installed to provide heat for his four new sheds.

Buried 100m into the ground across a one-acre plot, pipes filled with liquid coolant are extracting free heat from a subterranean water table to help heat – and cool – his crops of 200,000 broilers.

This type of renewable energy attracts support from government via the Renewable Heat Incentive, effectively guaranteeing an income stream of £150,000/year for 20 years – a key part of the financial planning for the unit.

The GSHP system has cost about £800,000 – double that of alternative systems. But it has an expected four- to five-year payback time, and Mr Timmis says it was a clear choice.

“As an arable farmer I’m tied to commodity markets over which you have little or no influence,” he says. “I didn’t want to be in a similar position when buying in fuel for our heat source, which ruled out biomass. Anaerobic digesters cannot produce sufficient heat and also need a good level of management, but I did consider poultry litter burners.”

The Ground Source Heat Pump (GSHP) option won the day for its independence from outside markets and the fact the heat is latent in the land the family business owns beneath its feet.

Although all poultry units will be sitting on soils or near water from which to potentially draw heat, not all can benefit, explains Matthew Evans of TGE Group, the firm that undertook the work at Mr Timmis’s greenfield site.

“It depends on ground conditions, who else is extracting heat or water in the locality, what impact it may have on other businesses or the environment – the list goes on.”

Specialist rigs were used to sink the pipework at Littlehales Farm, where four new Turkington sheds have been erected.

TGE Group start with a geological survey which uses data on abstraction and water availability, accessed from the British Geological Society and hydro-geological consultants. This data is married to the unit’s potential need, taking into account factors such as bird numbers, shed design, unit layout and, importantly, accessibility to an electric supply.

“The one energy source GSHP does need a lot of is electricity,” explains Mr Evans. “It is used to drive the compressors that extract the energy from the ground. You need about 100KVA per shed, plus a back-up generator should power supply from the National Grid be lost.

“But an important fact to have in mind is that heat pump technology is 300%-400% efficient; for every unit of electricity it consumes, it produces three-to-four units of heat, worth 8.7p/kW under the RHI.”

Mr Timmis says he plans, in time, to invest in solar PV technology, in order to produce more electricity himself and so reduce costs.

The geological survey at Littlehales Farm calculated an average ground water temperature of 10.5C. This would drop to an estimated 7.5C as heat was drawn away and the ground around the extract site reacted.

While the initial heat energy captured is not in itself enough to heat broiler sheds to the 33C needed at chick placement, transferring heat from the coolant and compressing it raises the temperature to a more usable level.

“The system can generate a water temperature of up to 70C,” says Mr Evans. “With 33C needed at chick placement, the system is currently designed to run at up to 50C at point of use.”

There are two distinct designs of GSHP installations, he explains. “Closed loop systems, where coolant circulates through the pipework and no ground water is removed, avoids the need for an abstraction licence. An open loop systems, which draws off groundwater and removes the heat before returning it to source, does require a licence.”

Hours of welding were involved in piecing together the complex network of pipes.

But the choices don’t end there. The underground pipework can be laid horizontally in a grid formation if sufficient land is available, or bored vertically. “Horizontal pipework requires the removal of a lot of soil. Vertical drilling – as we’ve used here – disturbs less material, though it does require the use of a specialist drilling rig.”

Drilling is usually the first on-site task as it can be a messy business. Into each of the 15cm diameter, 100m deep holes is lowered a series of 4cm PE-grade pipes with foot-welded joints, predicted to have a 100-year lifespan. Through this series of pipes will be pumped the coolant.

The holes are backfilled with a special grout and sealed to stop groundwater contaminating the aquifer below. A thermal-conductivity test confirms to the drill team whether enough holes have been bored to capture sufficient heat. It took three months to complete drilling at Littlehales Farm.

From the extract site, pipes carry the warmed coolant to a plant room. Enclosed in an unassuming green shed is a seemingly complex array of colour-coded pipes, transferring liquid first to heat exchangers and then distribution pumps and manifolds. From here underground insulated pipes take heated water to each of the four 50,000-bird rearing houses.

The equipment for GSHP technology is relatively low maintenance, explains Mr Evans. “The system includes five heat pumps with four compressors per pump, allowing a cascade effect to be achieved. The whole system is supported by 5,000-litre hot water storage tanks for each house, to even out the loads on the system should there be a surge in demand for heating.

A large cabinet-like control box runs the whole operation which can also be monitored and altered remotely by TGE Group as one of a range of support packages for unit operators. Maintenance bills are put at about £1,600/year; support package are more, depending on individuals’ needs.

Underfloor heating in each house is backed up with a series of six suspended fan coil heaters per house, to ensure the correct ambient temperature is maintained across the broiler cycle.

As broiler bodyweight increases, the birds push out heat, resulting in a need for cooling. The GSHP can help achieve this, using the underfloor heating system and fan coil units. The process is carefully controlled to aid the removal of moisture from the litter.

Mr Timmis admits the family business has opted for “bells and whistles” rather than “belt and braces” in commissioning the GSHP system. “The payback for the level of technology we’ve installed should be about four years. And, in particular, banks were keen to lend against this type of technology at the time,” he says.