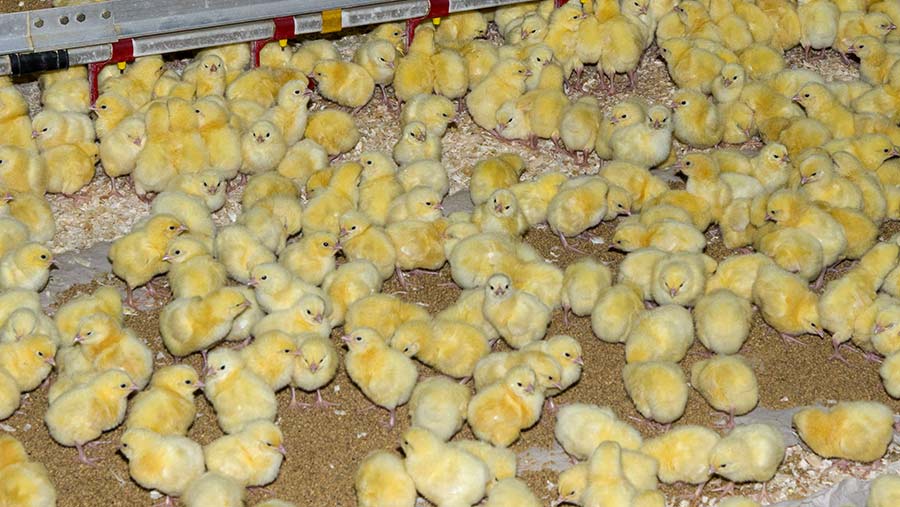 North Yorkshire broiler breeder and pig farmer Matt Donald is building for the future, optimistic that the 2-3% growth in poultrymeat consumption will continue as the UK’s 65 million population rises.

Mr Donald currently runs 74,000 broiler breeders on two farms alongside a 300-sow unit, under the Donald Pig and Poultry brand with his father Colin and brother Ben.

It marks a considerable expansion from when his grandfather Ken bought the original holding near Northallerton in 1959, stocking 500 birds.

The Ross 308 broiler breeders on his farms produce 13.5m hatching eggs, taking a 1% share of the UK market. Up to 3,600t of compound feed meal comes from ABN:

“They have been supplying us with feed for 60 years – we are one of their longest-serving customers,” says Mr Donald.

The birds, which are vaccinated off-site, arrive from PD Hook’s rearing farms at Thirsk at 18 weeks and start producing their first eggs at 22 weeks, reaching a peak at 28-29 weeks, when the laying percentage is 88-90%.

Each bird will lay about 148 chicks for the next 36 weeks, taking them to 60 weeks before depletion.

Eggs go back to PD Hook, which has been supplied since 2000. The spent birds are sent across the border to Cumbria’s Frank Bird Poultry.

The business has grown over the past couple of years following the purchase of a new unit from a local farmer in 2017.

North Yorkshire Council, the Environment Agency and the bank were fully supportive of the venture.

The new site contains three sheds measuring 79x24m each, with ridge outlets and side inlet ventilation supplied by Draper Ventilation, and Mr Donald is using the Dutch company Hortraco Agri and its sophisticated Fortica control system.

The sheds contain single-tier nest systems and are split in half so that each area contains about 5,800 birds in a 40ft pen.

The machine dispenses with hand-grading, but the staff need to be highly skilled to operate the system.

Mr Donald is pleased that the business has been able to attract young, skilled and enthusiastic staff. The average age of his eight employees is just 26.

“It’s important to make the job more pleasant. We’ve moved away from hand-grading and we want to have a nice environment with equipment that is easy to clean and wash down, supplied by local firm Precision Cleaning,” he says.

He has a passion to get the farm-life balance right, not just for himself but also for his family and team, as he feels it will keep people motivated and positive about life in agriculture.

He believes constant investment and improvement of the units will pay off: “If we get into the top quartile of producers and stay there, we’ll be fine.”