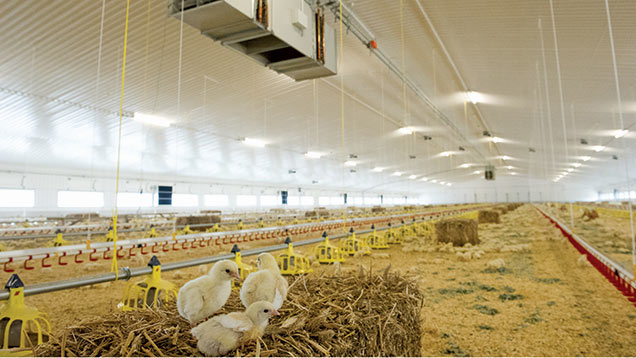 It is well known that chick start is crucial; alongside evenly distributed water and food, the ability to find the right environment plays a key role.

Chicks should not feel discouraged from using certain areas of the house, as uneven spread can result in competition for food and water that has an effect on their start and hence future performance.

In theory, the perfect environment will generate an homogenous spread of chicks in the first day. But in practice chicks still group, seek out solid structures, feed, travel to noises and “stream”.

Chick migration to the sidewalls, in particular, has been observed more frequently over the past year and this has coincided with the huge shift to hot water radiators using blown air in many broiler sheds across the country.

The extent of the problem varies widely. But if chicks migrate away from certain areas of a house in the first few days, then it is clear they are finding some aspect of their environment not to their liking.

To try and understand this better, heating and ventilation company draperVENT set about a thorough investigation.

Since migration will inevitably be temperature-related, thermal imaging, hot-wire air speed meters and thermometers were used to assess the thermal qualities of the sheds surveyed.

The house thermal environment is, broadly speaking, based on the following:

Typical recommendations for brooding air temperature range between 31C and 33C. But if the air temperature is too warm for the chicks, they must obviously find some method to cool themselves.

But litter surface temperature tends to follow the air temperature as hot air is blown around the house.

As such, the temperature beneath the litter surface, determined by the concrete floor, becomes the key factor in whether or not chicks migrate when air temperatures and litter temperatures are very even.

It is therefore important to pre-heat the house thoroughly, aiming for a concrete floor temperature of about 28C.

But the characteristics of hot water heating are quite different to traditional combustion heaters. Where the heat goes and the way in which the birds react is far more complex than can be identified with a couple of air temperature sensors suspended at either end above the floor.

Hot water coils lift air temperature much more slowly than direct-fired heaters, which can result in a longer time period to heat the building. Warm structures and concrete floors ensure all the heat is available to warm the air for the chicks, and minimises the risk of early crop condensation and litter problems.

But over-heating the floors in houses with very even air and litter temperatures can also cause migration as the chicks struggle to find anywhere cool.

Conversely, insufficient pre-heating that leaves concrete floors too cold can result in chicks moving away from the side walls as the litter becomes too cool, regardless of how even the air temperature may be.

Where migration is not seen, the pre-heat is usually about 28-29C, the floor and litter the same. Good circulation during pre-heating is essential to drive heat across the floor area, resulting in more even floor temperatures. Backing off prior to placement will then offer chicks sufficient variation between litter and air temperatures to be able to regulate their own body temperatures.

Once the chicks are placed, air temperature is then increased to approximately 31-32°C as the chicks settle. It is easier to bring the temperature up rather than cool them off, especially if they have already migrated and decided where they want to be. It can take a day or more to move them back.

Should the floor temperature be well below 28C, for example in very old, or very new, or poorly pre-heated houses, the brooding temperature may need to be higher after placement.

In the study, chicks did not appear to move from areas of high air speeds – about 0.5m/second – to areas of low air speeds, suggesting that litter and floor temperatures are more important for chick comfort.

Justin Emery is the senior ventilation consultant with draperVENT