The presence of coccidiosis in the gut is not necessarily going to cause illness in a bird – the parasite has lived alongside chicken since they were jungle fowl.

It is modern production – broilers reared in barns – that enables coccidiosis to build up and cause problems.

How the disease is caused

Coccidiosis is caused by protozoan parasites of the Eimeria genus which are always present in the shed and farm environment.

Their reproductive form – the oocysts – are present in the birds’ droppings and from here they can be ingested.

Once in the chicken they attach to cells on the gut wall and reproduce in several cycles, and once these cycles are complete, oocyts will be excreted back into the litter, where they go through maturation (sporulation) and can once again be ingested by birds.

A sporulated oocyst has a strong outer wall, similar to the shell of an egg, protecting the parasite within from almost anything.

How it affects the bird

This cycle of ingestion, reproduction and shedding can severely damage the gut wall, hampering the absorption of nutrients.

As the coccidiosis parasites build up, birds will become distressed, stop absorbing nutrients and become sick.

Each reproduction cycle lasts for five-to-seven days, and this is why a coccidiosis problem presents around 21-28 days; it takes time for the disease to build up in numbers sufficient to damage the gut.

So it is important to catch an infection early and treat before it spreads.

A coccidiosis problem gone undetected can spread right across a flock, and cause a serious drop in feed conversion, health problems and, eventually, mortality.

It is important to remember that coccidiostats are not designed for treating sick birds; they are used prophylactically, to inhibit the development of the parasite and stop healthy birds from becoming sick.

As well as keeping an eye out for unhealthy looking litter, watery faeces or mucus is an obvious indicator that there are at least some unhealthy birds in the flock.

It means that the broiler is not eating, or its gut is unable to digest food properly. A drop in feed intake can be the next indicator that coccidiosis may be present.

The Morbidity Scoring Scale is a way to visually quantify a flock’s fitness, by the appearance of individual birds or a group:

1 Ruffled feathers (especially on the neck) and squealing

3 Worse condition and no noise 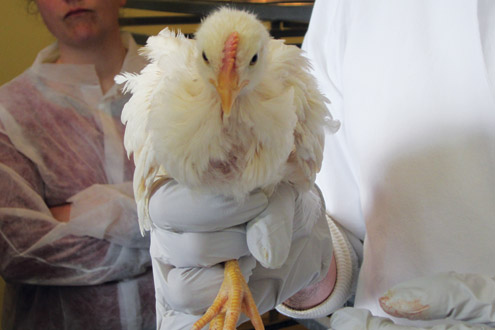 It is important to take a proper sample of birds if investigating a coccidiosis threat.

Select a few birds displaying signs of illness, and then the same number of healthy-looking birds.

This is important, as there may be more than one type of coccidiosis present in the flock.

Once suspicions are raised by a stockman, a vet will examine the sample and the type of coccidiosis will be identified through examination of the dead animal.

Different species of Eimeria (parasites that cause coccidiosis) will create differing lesions in different parts of the gut.

These two factors will indicate the type of coccidiosis and the severity of the infection. The vet will be looking for: 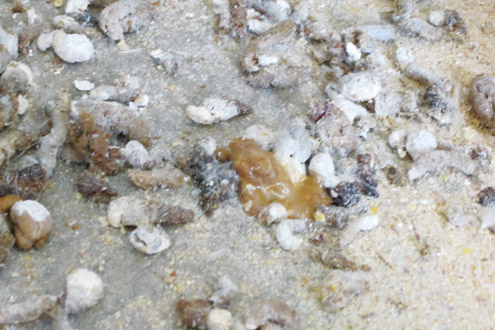 This strain is not highly pathogenic, but it can spread throughout a flock very quickly, and cause a significant drop in feed conversion when in high concentrations.

Lesion score one for acervulina is white spots confined to the duodenum.

In later stages these spots will fuse together then spread, and, eventually the gut wall will thicken, and the white colour will change to grey. 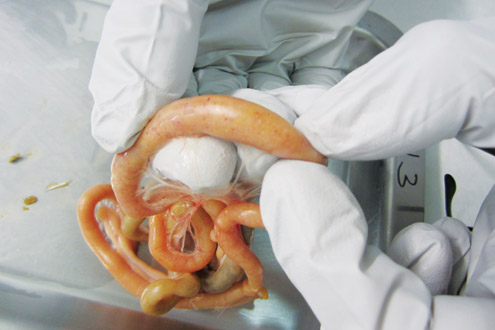 Early physical presentation is small, red petechiae on the serosal side of the mid-intestine.

Later stages of maxima will be indicated by the gut wall ballooning, the presence of orange mucus and, at the final stage, blood in the gut.

This strain is difficult to confirm with visual inspection of the gut wall alone.

Fortunately E maxima – as the name suggests – is characterised by large oocysts, and a vet can verify it is present by examining a gut scraping under the microscope. 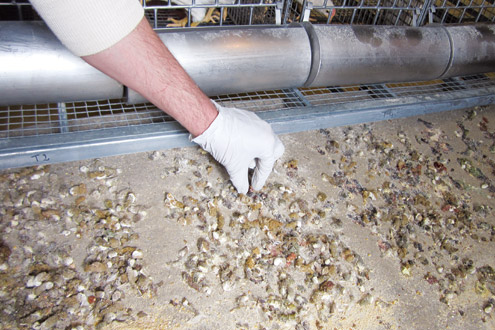 E tenella will usually present in the final stages of a crop – around four weeks of age.

It is highly pathogenic and well known because of the severe damage to the caecal wall that leads to internal bleeding.

As this species colonises the caeca, it will not affect feed conversion or create a drop in appetite,

However, in later stages birds will be in obvious discomfort caused by swelling and blood coagulating in the lower gut.

Even at relatively low infection levels, E tenella will cause bloody dropping easily recognisable in the litter. It should be confirmed by necropsy.

Cocci control without antibiotics in France

Consumers in France are asking for more au naturel food, and a key part of this is reducing antibiotics use, according to Alain Coedevez, of French agriculture firm Certi’Ferme.

“Our target is to reach 0% antibiotics use,” says Mr Coedevez. “Supermarkets are now more interested in this type of production; they see it as a way to attract new customers.

“So it is our philosophy to say no to more antibiotics. This needs the farmer’s complete commitment to reduction.”

One farm in the group, a mixed arable, dairy and poultry enterprise run by Sebastien and Anita Chesnel, and Seme Leroy, in Brittany, has managed its coccidiosis threat through vaccination and rotating broilers with turkeys.

The farm averages 3% mortality and birds are stocked at up to 42kg/sq m. Growing the Ross PM3, FCR averages 1.73, and broilers are taken out at 1.9kg at 36 days, following a first thin, usually three days earlier.

The region they farm in has restrictions on water and nitrogen management, meaning that before construction of a larger replacement poultry shed in 2009, they had to purchase the right to produce more birds.

“There is a very high commitment to the environment here,” explains Mr Coedevez.

The business has also invested in renewable technology, with solar panels lining the roof of one shed and a biomass boiler heating the two poultry units.

“This is ecologically intensive production,” says Mr Chesnel. “We use the tractors as little as possible and it’s the same with fertilisers.”

Mr Coedevez explains that, over the last three years, antibiotics use across the group has been cut by two-thirds. He says this has been down to a focus on management practice across the farms.

Coccidiostats are considered to be a mild antibiotic in France and their use is tightly controlled. As such, Certi’Ferme opts for vaccination.

“This was effective against a low-level coccidiosis problem in the Label Rouge (high welfare) part of our business,” explains Mr Coedevez.

The vaccination programme was subsequently expanded to all broilers, including standard broilers, and today the group vaccinates 600,000 birds a week.

Mr Coedevez says this, combined with rotating broilers with turkeys in sheds, as well as taking steps to improve water quality, better litter management and improving use of ventilation, has allowed the firm to become less reliant on antibiotics.

He adds that FCR has recovered as a result of the group overcoming its coccidiosis problem: “With standard broilers, 80% of health problems lie in the gut. Part of fixing this is reducing coccidiosis.”

One practice when a shed is depopulated is to clean thoroughly and fumigate with ammonia.

But, if sporulated coccidiosis is present in the shed, it can survive this treatment because of its tough outer wall.

Applying caustic soda to the floor and walls before the ammonia clean will allow the chemical to penetrate the oocyst wall and effectively destroy the parasite.

Jean-Michel Reperant, who heads the parasitology team at the Ploufragen research facility in France, explains that his lab is disinfected with steam, and that heat is probably the most effective way to destroy coccidiosis spores. “At 90C or above, disinfection is immediate.”

Steam cleaning is not practical in a poultry shed – burning is more conventional. But it will miss walls, as well as feeders and drinkers.

“In France they use disinfectant and emulsions, but they don’t rinse with clean water. If there remains only two oocysts, they can be picked up by the chick. In five days these birds can produce a thousand oocysts.”

Oocysts – the reproductive form of coccidia from which the parasites can emerge, multiply in the gut and eventually cause illness in birds

Sporulated – once oocysts become sporulated, they are infective, extremely tough and can survive exposure to bleach or other disinfectants and relatively high temperatures

Necropsy – the examination of a dead animal

Lesion scoring – a standarised way to grade the severity of lesions in the intestine caused by different species of coccidia. Runs from Grade 1 (least severe) to Grade 4 (most severe).

This article is based on a technical training trip to a session held by Jean-Michel Reperant, head of the avian parasitology team for Anses, the French national agency for food, environment and work. MSD Animal Health invited a group of British integrators and Poultry World along.