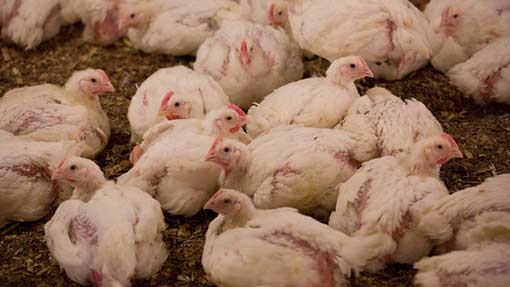 Under-reporting of one form of coccidiosis is raising fundamental questions about whether the industry is using the best method for diagnosis. Stuart Andrews of Zoetis reports.

Coccidiosis is one of the commonest parasitic infections found on broiler units in the UK.

Diagnosis is traditionally made by postmortem examination, scoring the number of lesions caused by the three main species of Eimeria affecting the birds – Eimeria acervulina, Eimeria maxima and Eimeria tenella, using the Johnson and Reid system.

But there are certain limitations to this scoring system, especially in relation to Eimeria maxima.

First, the presence of small red petechiae on the serosal surface of the mid-intestine, which can be a sign of the early stages of infection, are not always easy to see, even when using a magnifying glass under typical field conditions. Indeed, they may not even be present.

Second, signs of dysbacteriosis, a commonly-seen imbalance of the normal intestinal flora, are very similar to those of the later stages of Eimeria maxima infection. As such, signs of mild to moderate Eimeria maxima can easily be overlooked. 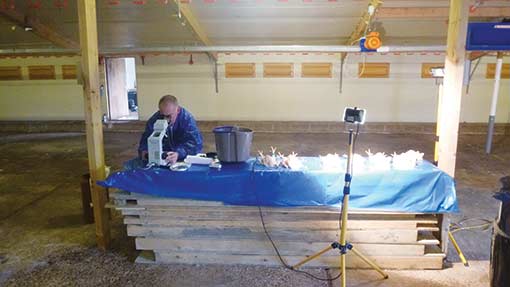 Scale of the problem

The Zoetis poultry team for the UK and Ireland regularly carry out intestinal health/coccidial lesion scoring sessions for broiler integrators.

A common finding over the past year has been moderate to severe Eimeria acervulina infections, but surprisingly few Eimeria maxima or Eimeria tenella.

The gross lesions of Eimeria tenella are well known and will usually be seen in birds about four weeks of age.

But the reason why Eimeria maxima has been so infrequently reported and under-diagnosed is a little more complex to explain and is related to the methodology for diagnosis.

Initially, the Zoetis team based its diagnosis for Eimeria maxima on the Johnson and Reid method, culling six birds from each farm and scoring them from 0 to 4 depending on lesion count.

Where these lesions are present in high numbers, corresponding to scores of 3 or 4, the diagnosis is clear cut. But this is rare.

Mild to moderate infections, when low numbers of small red petechiae are found, corresponding to scores 1 and 2, are more common and interpretation becomes more difficult. In this situation, a fresh scraping of the mucosa from the mid-intestine is taken and examined under a microscope to confirm the presence of gametocytes and the characteristically large yellowish brown oocysts of Eimeria maxima. If present, a more detailed microscopic scoring system is then used.

If no endogenous parasites are seen, then the bird is scored negative for Eimeria maxima (score 0), even if some small red petechiae have been seen.

Suspecting that infections with Eimeria maxima may have been missed, the method has recently been modified.

In addition to the above procedure, fresh mucosal scrapings from the mid-intestine are now also routinely taken from every bird having either significant fluid, orange or pinkish mucus in the intestinal lumen, or intestinal ballooning – regardless of whether there are red petechiae present. These are then examined under the microscope to check for oocysts and gametocytes.

The initial results from using this modified methodology have been quite revealing (see graph, below). 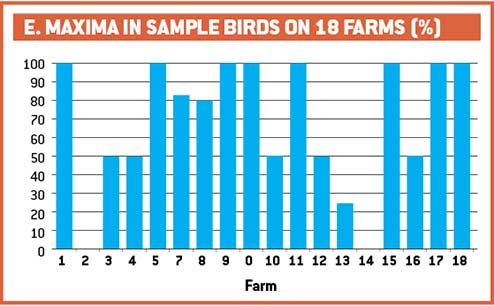 Out of the 108 birds examined across 18 farms, six had small red petechiae on the serosal surface of the mid-intestine. Of these, two (33%) were positive for Eimeria maxima oocysts and gametocytes. Both of these birds had lesion scores of 2. Therefore, using the traditional methodology, just 1.9% of the total number of birds examined would have been scored positive for Eimeria maxima infection.

Using the modified methodology, 42 of the 58 birds that were examined microscopically were found to be positive for Eimeria maxima. The average lesion score was 1.5, a level generally considered to have an effect on weight gain and feed conversion under field conditions.

Therefore, using the modified methodology, the total birds found positive for Eimeria maxima went up from 1.9% to 39% of the total sample. The message is that, without taking mucosal scrapings from the mid-intestine, a significant number of sub-clinical infections with Eimeria maxima, sufficient to have an impact on weight gain and feed conversion, will be missed.

The new technique has shown coccidiosis is not limited to birds between 21–28 days of age. Earlier or later infections are not rare.

For example, of the birds examined from the 18 farms in this study, severe Eimeria acervulina lesions (score 4) were observed in broilers just 15 days of age, and Eimeria maxima lesions (score 2) in birds just 19 days of age. These observations suggest quite high levels of infection pressure for both these two species of Eimeria on many broiler farms in the UK