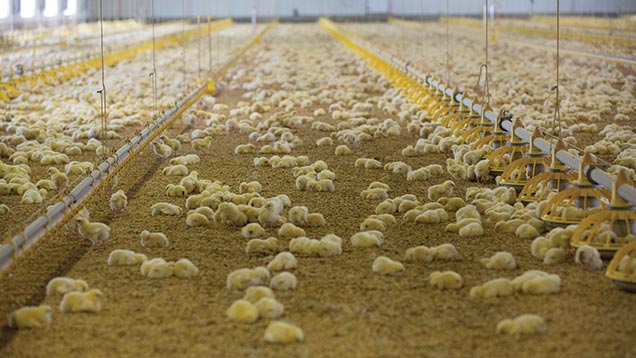 Cutting campylobacter on the farm to reduce levels going into slaughterhouses was the focus of a recent campylobacter conference, hosted by the NFU and FSA. Jake Davies offers a summary of the presentations.

Enhanced biosecurity looks to be having an impact on campylobacter levels on-farm, but the summer months may be a challenge too far for even the most hygienic units.

Despite this, tightening practices is a key focus of both Moy Park and Hook 2 Sisters as they seek to lower overall levels of the bug in supply chains. Both integrators have undertaken large-scale trials to determine the shed-by-shed colonisation of campylobacter and the effect biosecurity is having.

The principle behind enhancing biosecurity is minimising levels before they reach the slaughterhouse. But it is now generally accepted a large-scale factory intervention will also be needed to truly suppress the bug.

Moy Park’s Muhammed Maliki said the integrator had chosen farms varying in age, size and spec for its two-year trial. This was to ensure a wide range of farms fell into the sample.

The research tested each shed for colonisation, and each shed was treated as a specific unit. Farms were asked to adopt the highest standards of biosecurity, and control sheds were established to find the differential.

Farmers were told to adopt physical barriers at shed entrances, house-specific shoes, and a focus was placed on foot dips with lids. Disinfectant was changed regularly, up to three times a week if necessary. Hand wash and sanitizer was also made available on farms. Visitors were kept to an absolute minimum.

“We also wanted to make sure each farm was clear when chicks were placed, and we were delivering clear, clean material into these farms,” said Mr Maliki. That meant sampling chicks, bedding, feed and water as it went into sheds.

The birds’ ceaca and neck skin was then tested, following protocols set up by the FSA.

Headline figures for the trial suggest that, were these tighter biosecurity measures rolled out across Moy Park’s entire farming estate, a third of the highly-colonised batches of birds would be prevented.

Mr Maliki’s message was that the trials proved enhanced biosecurity could have an impact on rates of campylobacter. “We managed on all 16 farms to isolate partially positive sheds. This was taken to mean that strict hygiene can prevent the spread of the bug between individual sheds on a farm.”

Hook 2 Sisters is part way through a similar enquiry, but said it was too soon to draw meaningful conclusions. Part of its trials involve no-thinning.

Meanwhile, veterinary consultant Jane Downes highlighted areas that farmers may have overlooked when considering biosecurity. The bottom of ladders, electric cables that run between sheds and the transfer of tools between buildings were all highlighted as areas often neglected.

One striking point made was the need for effective foot dipping. “Splashing your foot in for three seconds does no good at all.”

Her take-home message was for broiler producers to change their attitudes altogether. “You’re not farming, you’re producing food,” she told the seminar.

Farmers should be actively monitoring the condition and cleanliness of crates that catchers bring to their farms, according to Ms Downes.

She has completed a review of the cleaning and hygiene procedures on farm and in the slaughterhouse and identified crate cleanliness as a key point in the chain at which campylobacter may infect a farm.

It is well established that the bug often only appears post-thin, but the exact vector is not known. Crates almost certainly form part of the risk.

Ms Downes inspected several slaughterhouses’ washing facilities, and found a wide range of differences in temperature and set up. Soaking time varied, as did the quality of inspections.

Nearly universal, however, was the dark conditions required in lairages, making effective inspection difficult. She described taking apparently clean crates out into daylight, and highlighting faeces that cleaning had failed to remove. “It’s amazing how much dirt can come off a crate that looks clean.”

As such, it was important that farm managers monitored the cleanliness of crates as they arrived on farm, as well as overseeing catching teams. Ms Downes recommended farmers take photographs of, and record exactly their condition as they arrived, and report it to area managers.

Figures from a Which? survey, conducted in 2014, found 76% of consumers trusted supermarket chicken was safe. But when asked, a similar amount felt campylobacter levels were too high. 60% underestimated its prevalence.

Two new feed additives, comprising ingredients already approved for inclusion in livestock diets, look like they may suppress the colonisation of campylobacter in the guts of poultry.

An early trial has even suggested it can improve the performance of birds by potentially preventing campylobacter bacteria from hampering digestion.

The two additives currently being trialled are based on a new class of iron compound known as Fe3c, combined with an essential amino acid. The two products that have been developed are named Typlex and Q-plex.

They were developed by a new company, Akeso Biomedical, which is run by Dr Simon Williams. He told the conference how the two compounds prevented campylobacter from attaching to the wall of the gut, thereby preventing colonisation.

His company has just completed a small-scale trial, in conjunction with Banham Poultry and with funding from Aldi. It took four flocks of 40 birds each and grew them to 42 days, adding the compounds to the diets throughout the trial.

At day 21, litter contaminated with campylobacter was introduced to three of the four flocks, and results showed that the compound appeared to suppress colonisation in the gut. Not only this, but the FCR (feed conversion ratio) was improved when compared with the control.

The next stage is to determine exact dosing of the compound, and to run larger scale enquiries.

A second innovation introduced at the conference was titled a “robotic nose”. While still an early prototype, it has the potential to monitor for campylobacter in real time.

It will work by detecting “volatile organic compounds”, which are emitted by the body as a result of infection. The technology is already being used in fruit and vegetable stores, to find produce that may be going off.

A consortium is now trying to tune the sensors in to the smell of campylobacter in poultry sheds. Poultry vet Philip Hammond told the conference that a working model could be measuring the air quality every 15-30 minutes, giving real-time feedback to farmers and slaughterhouses. It may even be able to give feedback as to the level of campylobacter present in individual sheds.

Optisense, a small company based in Sussex, introduced its new rapid detection test that can give a campylobacter positive or negative reading within the hour.

Rather than PCR testing, the devices that the firm has developed utilise the principle of isothermic amplification of DNA.

In practice, it allows for a boot swab sample to be quickly processed and a positive or negative campylobacter result gained.

The technology is used in German hospitals to detect MRSA, in Guinea to test for Ebola, and by the Forestry Commission in its enquiries into Ash Dieback, according to Michael Andreou of Optisense.

His firm first got involved with campylobacter testing with Cranberry Foods around five years ago. When Bernard Matthews bought out the firm, it inherited the project.

The final product, which is in pre-production, can be used by a lay-person after just half a day of training, and is portable enough to be transported from farm to farm. Samples cost around £10 each with a bulk order discount

Testing equipment can be bought outright or, if enough tests are needed can be rented from the company.