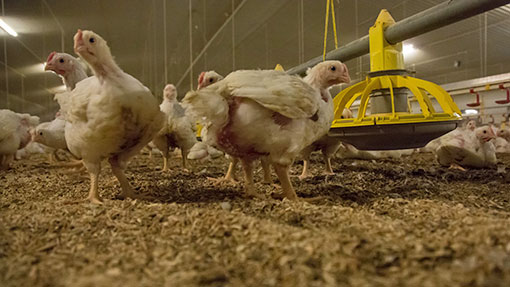 St David’s Poultry Team has launched a fresh approach to reducing antibiotic use on farm, focused on improving overall poultry health in an holistic way.

“Poultry producers are coming under increasing pressure from retailers and processors to reduce antibiotic usage,” says partner in the business, Richard Turner. “But putting that into practice on farm without adverse welfare implications is easier said than done.”

As such, the group has developed its Applied Bacterial Control (ABC) concept, using products like short-chain fatty acids, essential oils and probiotics to improve chick health and intestinal integrity.

“The ABC approach is not to rule out antibiotic use, but to improve overall poultry health and focus the medication where it is needed,” said Mr Turner.

He recommends adopting ABC “from breeder through to finisher” to keep on top of intestinal disorders. “Diarrhoea can be a serious problem on poultry farms, and it can have multiple causes, so taking an holistic approach to tackling it is essential.”

Following a series of on-farm trials, St David’s says it is now working with large integrators to roll the ABC approach out across the UK.

The veterinary group is also undertaking research into the use of beneficial bacteria that “cannibalise” harmful bacteria, creating ongoing protection against disease.

“In pigs, bacterial cultures can be used to specifically kill salmonella, and bacteria can also be sprayed on to surfaces post cleaning to produce bacterins which then kill E coli,” said Mr Turner.

“There are many competitive interactions between bacteria and taking advantage of these competitors opens a completely new approach to improving bird health.

“Producers are always aiming for sterile environments, but it may be that colonising a farm or hatchery with beneficial bacteria is the way of the future.”