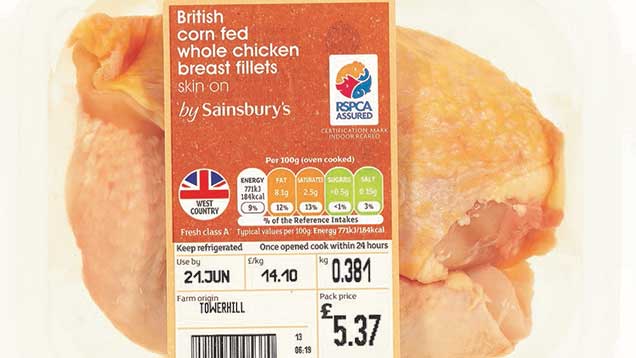 Freedom Food labels are being replaced by the new RSPCA Assured labels on packs of eggs and poultrymeat, as the society rolls out its new identity in retail outlets.

The aim, says the RSPCA, is to raise awareness of the brand and so improve welfare standards for a growing number of farmed animals. There are currently an estimated 40m terrestrial animals farmed under the Freedom Food scheme – including about 17m layers – and the aim is to raise this by 100m over the next five years.

But there is also a commercial motive, as consumer awareness of the Freedom Food brand, at just 24%, is way below where the organisation wants it to be. In contrast, 96% of people have heard of the RSPCA.

“Greater recognition of the new label means more people will choose RSPCA Assured products,” said chief executive Jez Cooper. “We estimate the amount of RSPCA Assured labelled food could increase by as much as 200% in the next five years (from a current level of 2,000 branded food products).

“Put simply, the more people choose RSPCA Assured products, the more supermarkets will stock them and more farm animals will have a better life.”

RSPCA Assured products are being rolled out into Sainsbury’s (the scheme’s largest customer), Aldi, The Co-operative and Lidl this month, and will continue replacing the Freedom Food label in other outlets over the next 12 months.

To qualify for the label, birds must be given extra space, natural light and straw bales to peck at. Despite having a new logo, the scheme will continue to be run by the Freedom Food organisation, which is a charity in its own right and a wholly owned subsidiary of the RSPCA.

A TV advertising campaign to promote the new label will launch in September.