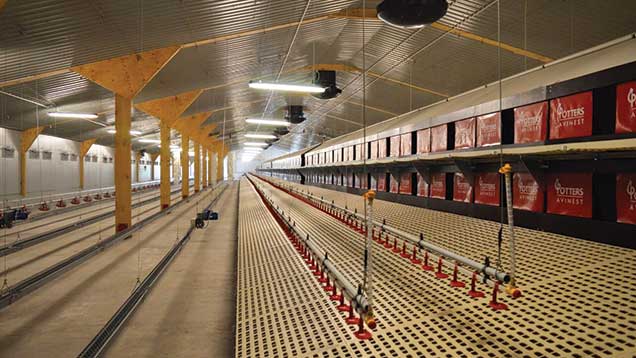 New broiler breeder units are few and far between, so when Richard Maltby decided to create two new sheds at Ladylands Farm, it was with a completely blank piece of paper.

When you’re investing £750,000 in new broiler breeder houses, you want to get the design right first time. And with the right input, you may even create something pioneering – which is what Richard Maltby has done at Ladylands Farm, Wiveliscombe, Somerset.

Rather than opt for the usual steel-framed clearspan chicken shed, Mr Maltby employed local firm Blackdown Buildings to design two timber-framed and timber-clad sheds with high roofs to create a more pleasant and natural environment for humans and birds alike.

“Birds don’t like to feel exposed and I think they perform better in a timber building with central support posts,” he says. “I certainly feel more comfortable in here with timber and colour rather than a stark clinical environment.”

The eaves are 3m high internally, with the roof rising on a 15 degree pitch for improved ventilation and ease of management. “We’ve got two old, low sheds and I really struggle to clean them,” says Mr Maltby. “The bigger the machine we can use to clean out, the quicker it will be.”

“The heavy-duty timber frame is in 6m bays, and is slightly cheaper than steel,” he says. “The only potential issue is red mite – but you can treat against that – and a major advantage is that wood doesn’t conduct heat very well so it’s easier to insulate.”

Mr Maltby is aiming for the interior to be 20C year-round, without the use of heaters, and chose to install a Munter ventilation system that uses permanent magnet motors and electronic controls to reduce energy costs by around 60%. The ridge-mounted chimneys extract air drawn in through side wall inlets, which were designed to precisely control air speed and direction.

The fans and shutters are carefully baffled to minimise heat loss and ingress of both light and water. And the system is linked to a computer which monitors temperature and humidity and controls lighting, feeding and many other systems in the house.

Lighting is programmed to turn on at 4am and off at 6pm, once the hens are sexually mature. This is linked to the lighting in the nest boxes, which attract the hens in to lay and turn off when the boxes shut up for the night.

Mr Maltby opted for a double-tiered Potters Avinest system designed for longevity and cleanliness, suitable for broiler breeders as well as layers.

“Layers tend to be 1.8-1.9kg whereas breeders can be up to 4kg, so you need a very strong, multi-purpose nest,” says Gordon Hunter, regional equipment manager at Potters.

“Egg hygiene is really important because the shell pores are open when the egg is laid, so if you get bacterial loading from muck it will create problems down the line.”

The nests have perforated Astroturf mats on floors that tip up at night, making them self-cleaning. Central egg belts transport the eggs to collection tables housed in a 4m wide corridor that links all the sheds.

“We had to turn the egg belts around in the older sheds so they fed into the central collecting area,” says Mr Maltby.

“We collect the eggs twice a day – it takes about two hours to fill a trolley (4,752 eggs) on your own and we’ll fill five or six. They then go into storage at 16-17C before a lorry comes three or four times a week, collecting 27 trolleys at a time to take them off to be incubated.”

Having kept 16,000 broiler breeders since 2001, this next phase of Mr Maltby’s career is all about maximising efficiencies. “The existing sheds were set up as broiler units when I moved here, and I converted them to broiler breeding,” he says.

It was an expensive process getting planning permission, but the new sheds will double the farm’s capacity to 32,000 birds, with each shed housing almost 10,000 hens and 1,000 cockerels.

“We produce for PD Hook so will have Cobbs in the new sheds and the smaller Hubbard JA87s in the older sheds to use the space most efficiently,” says Mr Maltby.

The pullets arrive at about 18 weeks old and are kept until they are between 60 and 71 weeks old. “We’re on an all-in, all-out system, and will be empty for about six weeks for cleaning and disinfection.”

When the birds arrive, lighting is kept low at five lux for eight hours a day, then gradually increased from 18 to 22 weeks so both the hens and cockerels reach sexual maturity at 23-24 weeks.

“Before week 23 I sell the eggs to be made into egg powder – they won’t go for incubation until they reach 50g in weight, to produce a 34g chick.”

The layout of the shed is very similar to the unit in which the birds are reared, with water drinkers above the slats near the nests. The chain feeders can be raised and lowered, making it easier for Mr Maltby to walk the shed during the day, and enabling the height to be adjusted as the litter builds up.

The birds are fed a strict diet comprising a wheat and soya meal mash with 18% protein and 12.3% crude ash. With large feed bins located between the sheds, the feed is augured up into each shed, and down into concertina bag hoppers that expand down as the feeders are lowered.

“We feed once a day at between 8am and 9am, and can run the chain while it’s lowering, so that there’s feed available all the way round the shed by the time it reaches the floor.”

Diets are kept strictly separate. Males are prevented from accessing hens’ feed by excluder grills, while cockerels get their own pan feeders, raised to their height. These feature feed indexing: different-sized holes for feed to drop through to ensure equal distribution of food around the shed.

At the end of the flock the birds are sold to Noble Foods for processing, with overall mortality averaging around 5%. “I really enjoy the job and although it’s capital intensive the returns are good,” says Mr Maltby.

“I had to borrow the whole amount for the new sheds, and put my house on the line, but HSBC have been very supportive and the sheds should pay for themselves in 15 years. If it works well I’d like to replace the existing sheds sometime in the future.”

“It’s very important to control the cockerels’ weight to optimise performance – if they are too fat or thin it affects fertility,” says Mr Maltby. “We weigh the birds once a week, and at maximum feed the hens eat 170g a day each with the cockerels getting about 150g.”

To reduce the number of floor eggs, he walks the sheds regularly, collecting eggs and moving hens into the nests. The hens will typically lay around six eggs a week, with each mating enough to fertilise five or six eggs.

“If fertility drops it’s always down to the male. If the cockerels are too rampant we’ll take a few out to reduce the ratios, and if they get a bit old we’ll bring in a few younger ones,” says Mr Maltby.

Being paid per chick sold, it is in his interest to maximise hatchability of the eggs. “We monitor and record temperature variations and total water consumption.

“They should drink the same every day, so if consumption drops we know there’s a problem. Noise is another indicator – it’s deafening with the cockerels crowing and hens clucking; if they’re quiet something’s up.”

Fortunately, health problems are few and far between. All the pullets are vaccinated for a number of diseases before arriving on farm, and Mr Maltby has stringent biosecurity procedures including disposable overalls, indoor and outdoor wellies and restricted access.

“We’re not allowed to give them any medication or probiotics at all – only vitamins in the water. If we do get any bronchitis it means the ventilation isn’t as good as it should be.”