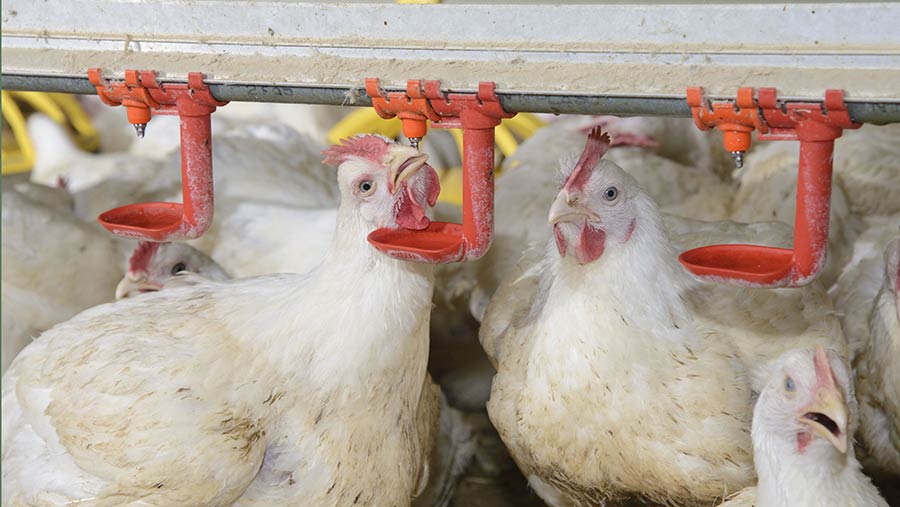 Antibiotics use by the UK poultry sector has dropped significantly over the past 12 months, as the sector’s voluntary stewardship scheme continues to take effect.

The British Poultry Council (BPC) has been collecting data on the actual amount of antibiotics used on its members’ farms – covering about 90% of the poultry sector – for the past four years.

“Our sector has led the way, with real progress seen since the formation of our BPC chicken antibiotic stewardship scheme in 2011,” said BPC chairman John Reed. “The data shows that the industry is holding to its commitment.”

Analysis of the latest data has identified colistin as an antibiotic that could be targeted for further reduction. This follows recent research in China linking colistin to antibiotic resistance in poultry and pigs.

“We recognise the importance of colistin as an antibiotic of last resort for human medicine, so the BPC membership undertake not to use it in their flocks,” said Mr Reed.

The move to ban it marks another proactive decision by the poultry sector, in keeping with its commitment to the responsible usage of antibiotics, added the BPC statement.

The British poultrymeat sector is currently the only one that collects and shares its antibiotic usage with the Veterinary Medicines Directorate (VMD).

The more traditional approach, still used by other sectors, is to simply measure sales of antibiotics. In 2014 – the last year for which data is available – the UK livestock and aquaculture sectors traded some 430t of antibiotics, a figure which was up 9% on the previous year.

The drop in antibiotics use in poultry stems from the industry’s 2012 voluntary ban on the use of third and fourth generation cephalosporins in broilers, together with a ban on fluoroquinolones in day-old chicks.

But the latest figures also follow press coverage in early February which suggested the use of fluoroquinolones – a product banned altogether in the US in 2005 – had gone up 59% to 1.126t in 2014.

Poultry vet Stephen Lister of Crowshall Veterinary Services pointed out that the overall volume of fluoroquinolones used in poultry is very small compared with other classes, so is subject to bigger percentage swings.

The latest figures from the BPC point to a 53% reduction in fluoroquinolones use in 2015.