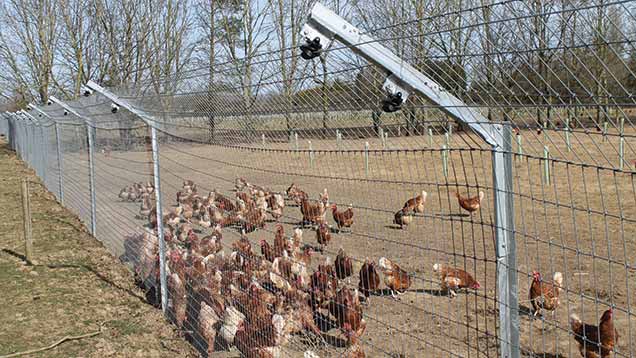 Installing a new perimeter fence has been a costly, but worthwhile investment for one southern counties egg producer.

As any chicken farmer will tell you, the battle with foxes is a constant one.

The animals are incredibly intelligent and, just when you think you have them licked, one or more will overcome your defences and cause havoc with your flock.

That has certainly been the experience of Graham Fuller, who manages a number of free-range farms for a southern-based egg producer.

“The worse I have witnessed in one attack is over 200 dead birds caused by three foxes getting into a range,” he says. “I once even saw seven foxes in a field at one time. They were working together as a team and cornering the chickens before we disturbed them.

See also: What to look for in a rifle

“Foxes are incredibly canny. They will patrol the same route night after night at exactly the same time, checking the fence for any sign of weakness. They don’t like to work hard for their food, but if they can smell a place where a rabbit has got through, they will focus on that spot and try and find a way to follow.

“They will also work out what time the chickens are shut up at night. If they can find a way in, they will time their visits to get there early.”

Faced with this challenge, Mr Fuller maintains an active fox management policy, including positioning motion sensor cameras around the farms, to build a picture of fox numbers and their patrolling habits.

Once a fortnight, he organises a lamping session, to spot and shoot the unwanted visitors. “We aim to reduce fox pressure on the perimeter fences. The more this pressure builds, the more likely it is that they will eventually find a way to get in.”

But while these methods are all part of the strategy, the single most important element is the fence, and Mr Fuller has been heavily involved in designing and installing a new set-up to replace the farm’s traditional structures.

“We have been upgrading all our farms,” he says. “The ethos has been that our new sheds are expected to last 30 years, so we want our fences to last that long too.”

The old fences had run their course. Put in 25 years ago, the construction was based on chestnut posts, rabbit and chicken netting, with electric strands top and bottom.

But the chestnut posts were rotting through. “On one farm with 90,000 free-range birds we were replacing about 500 posts a year,” Mr Fuller recalls. “At £2.50/post, and another £2.50 in labour and sundries, we were spending about £2,500 a year. Add to that the time spent walking the perimeter and patching things up, fence maintenance was nearer to £5,000 on one farm alone.”

The wire netting too was also wearing out and modern replacements just did not have the quality or durability of products that were around 20 years ago.

The aim, therefore, was to come up with a system that offered a maintenance-free solution, provided the quality that would last and, of course, that would keep foxes and badgers out.

A four-wrap hinge makes an overhang

Having researched all manner of materials and suppliers, the preferred solution was found just down the road, with a new fencing system from agricultural merchants and fencing specialists McVeigh Parker.

The system is based on Clipex fence posts, sourced from Australia, combined with X Fence wire, custom made in New Zealand.

“This is the first time we have ever installed our system on a poultry farm,” says company director Chris Hambridge. “We have done lots of deer fencing and security fencing, for example, around solar farms. But the system is well suited to any predator control.”

The fence posts are made of high-tensile steel, hot dip galvanised with over 600g/sq m zinc. “This gives them a degree of flex, while doubling the life compared with the standard post. In rural areas they should last a minimum of 30 years.”

The Y-shaped profile also makes them easy to drive in and gives better purchase, says Mr Hambridge, who explains they also have an “anti-lift” device. And, since the EU banned certain chemical treatments of wooden posts, metal posts offer much extended life expectancy.

The X Fence netting is coated with a 95% zinc, 5% aluminium mix and features a patented X knot system, cold-forged at the corners of each square.

This means that each vertical strand of the fence is a single wire, as is each horizontal wire, aiding strength and stability.

Combined with the fact it is 2.5mm diameter wire, compared with 2mm used on most chicken wire, it is almost impossible for the squares to be pushed out of shape, broken or widened, be it by a rabbit, a badger or a fox.

Another important design feature is the four-wrap hinge near the top, which makes the top section lean out to form a “crank” or apron. This makes it hard for anything to climb over.

And then there is the mesh size. At the top the squares are 50mm wide and 100mm tall, but at ground level they are just 50mm x 50mm to make access to the ranges impossible, except for the smallest of birds and rodents.

Installation is a relatively straight forward operation, involving contractors. The key is to get the fence buried and so it starts off with a trenching machine digging to a depth of 450cm.

The 3m corner posts and end strainers are then put in place, sunk to a depth of 1.5m, leaving 1.5m above ground. The wire is then unrolled and tightened along the whole length, before supporting posts, measuring 2.8m, are lined up and sunk some 3m apart.

The wire is then simply clicked into place and tensioned, with two electric strands run along the top section, to ward off any of the more acrobatic foxes.

“I had originally intended to have a system that was electric wire free, as relying on electricity leaves you vulnerable, should the power supply fail or the wires short out,” says Mr Fuller.

“But I then witnessed a fox get over, despite the fact we have the crank. It just ran at the fence so fast, landed half way up, got its front paw around the lean and was over.”

Two electric wires along the top have solved that one, but it may still be necessary to run an electric wire along the bottom too. “Even though the netting is dug in, we’ve had something get under.

The trenching leaves the ground softer, especially around the corners, and it only takes a rabbit to get through and the fox will follow.”

Despite this, Mr Fuller believes the system is as fox proof as it is possible to get.

Installing such a high-spec system does not come cheap, though he believes the savings will be made in the long run. He puts the cost at about £16/m, compared with £8.50/m for a conventional wood and chicken wire equivalent.

“It may be double the cost, but we expect to see three times the life, so I’m convinced it will be cost effective. Maintenance costs are also practically zero.”

As for the aesthetics, Mr Fuller accepts that it may not look as attractive as a wooden post system. But he maintains that the public and customers understand the need for effective fencing.

“Also, since we have substantially reduced the risk of predators, our hens now feel more confident and we are seeing much better ranging, which has to be good for welfare, as well as image.”