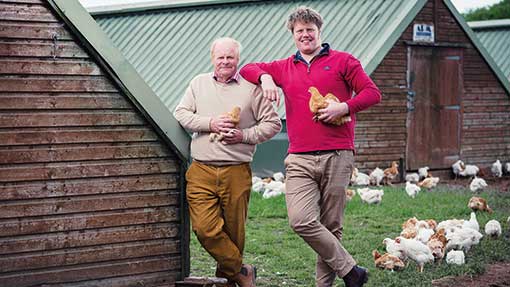 Three poultry farmers in Scotland have won a contract to supply free-range chicken to discounter Aldi’s Scottish stores, in a deal worth £400,000/year.

The supermarket has placed an order for 2,500 birds a week from Robert Morris, in Strathaven, Kenny Gilchrest, in Kilmaurs, and John Medlock, from Laurencekirk (pictured with son, Michael). The three farms have joined to form MGM poultry.

In May, the Scottish government released a survey that indicated poultry sales were growing three times faster than in England and Wales, and consumers were willing to pay a premium for Scottish-branded chicken.

Mr Morris, one of the farmers to supply Aldi through MGM poultry, said the new contract was a “huge boost” for the sector. “It’s exciting to see our product on the shelves across stores in Scotland.”

Aldi said the chicken would be sold whole at £3.29/kg.