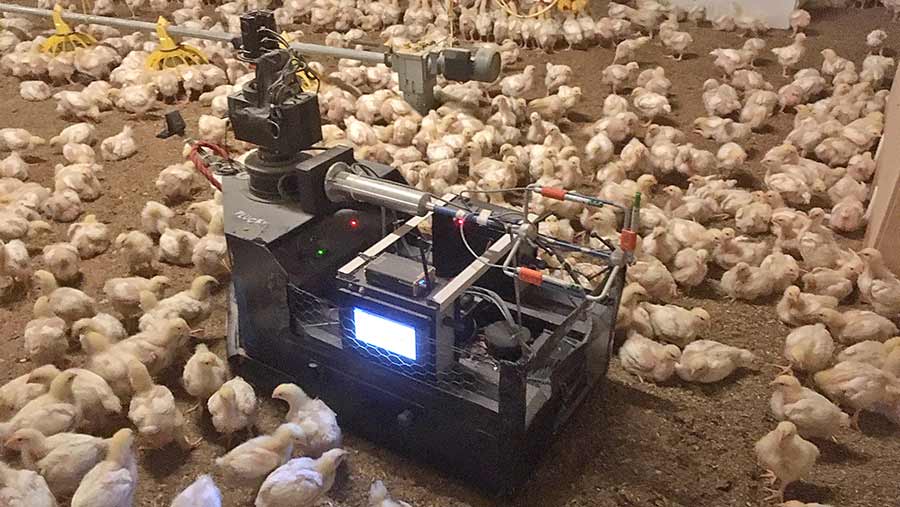 Installing robots in broiler sheds to keep birds active may improve mobility towards the end of crops and, as a result, crop uniformity, a small trial has suggested.

Robochick is a modular robot that it is hoped will play a role in helping farmers better monitor shed environments, improve bird activity levels and even collect fallen stock.

It has been developed by a consortium that includes researchers from the Royal Veterinary College (RVC), Harper Adams, Applied Poultry and Ross Robotics, a company that develops devices that can monitor conditions in some of the harshest environments on Earth.

See also: How to use data to get broiler chick start right

The RVC’s Theo Demmers has been part of the project since the beginning and says he felt modern broiler farms needed better ways to monitor birds’ environments.

He explains that, while a single stockman can assess an entire flock, close inspection of individual birds is almost impossible. Furthermore, most sheds monitor birds with just a handful of sensors.

“That was fine 20 to 30 years ago, but nowadays we have sheds with 55,000 birds and we’re still using three, maybe four temperature sensors at most, and maybe two humidity sensors. They are also not always down at bird level,” Mr Demmers says.

So, the concept was born – a device that can monitor birds at their level constantly, and autonomously, without negatively affecting their behaviour.

The project began with work on commercial farms using a simple bot with a cardboard shell, so it could be easily modified, to get the basic device right. Those first trials had issues with birds being startled by the automaton in their midst.

But a later trial in a research facility at the RVC found that, if day-old chicks were placed with the robot, they soon got used to its presence.

“The chicks appeared to be imprinting on the robot; they were curious right from day one. They actively pursued it,” Mr Demmers says.

The next stage was to move the research to a more commercial setting.

Applied Poultry’s David Speller hosted the trial, with one shed having the robot and a second selected as a control. The robot took two tours of the shed each day in a spiral route over the crop, with each pass taking about two hours.

At the end of the trial, a 2.9% increase in feed conversion was reported from the robot shed and 18.7% fewer rejected birds when compared with the control.

Mr Speller says he felt it was bird movement that made the difference. “I think this improvement in feed conversion ratio is due to improved uniformity.

“Pretty much every species has a way of being aggressive in a visual way, and I suspect broilers are the same.

“Maybe the robot is just breaking up that dominance, allowing more birds to get food and water.

“So more activity and movement, which you might think would be bad for feed conversion, is actually allowing smaller birds to get feed and water.

“We cannot replicate what the robot can do. It’s there all the time, appears less aggressive. They get used to it – it is a gentle stirring for the birds.

The project is now looking to complete more trials on farms to fine-tune the product further, ahead of full commercialisation.

Other robot technology for broiler farmers

A modular bot that patrols poultry sheds and can scarify litter as it does.

Made by a French company, Tibot, this small device moves around broiler breeder sheds keeping birds active and helping to prevent floor eggs.